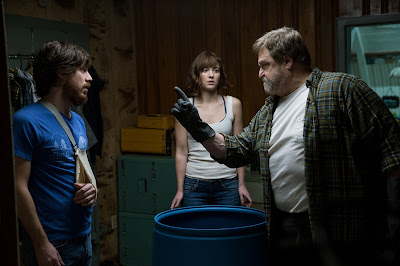 What is certain in both regard is that “10 Cloverfield Lane” is a rather effective little thriller, especially as it blends all of the obligatory jolts with an underlying clout that demands considerations beyond the conventional borders of the genre. That it shares part of its name with “Cloverfield” – a fantastic handheld monster movie from nine years ago – may or may not be coincidental, but the notion lends enthusiasm to the possibilities of the screenplay; when the movie bends rules or obliterates expectations, they come with premeditated acceptance, because it is clear that the reality of these characters is far more volatile than what normally happens in movies of this nature. And our buy-in is anchored further by performances that pack shocking intensity: Winstead as a convincing captive able to think strategically about her plight, and Goodman sublime as a brooding beast whose practicality carries its own sense of menace, especially as he is tested beyond the limits of the rules he creates.

Their interactions supplement the tension. Though Michelle is running from something that has caused her some level of momentary pain, her anguish is subverted by the strange dilemma of waking up in a creepy underground bunker, especially one inhabited by a man who freely feeds and hydrates her but has limited patience for her anxious need to escape. A third character Emmett (John Gallagher Jr.) commits to the bleak narrative: nuclear fallout has made it impossible to live above ground, where the air is fatally toxic. But how did they both come to be in such a place? Though details remain brief, the Goodman character is freely established as a believer in far-fetched conspiracy theories; believing the world to be approaching certain destruction on part of foreign nations (or even extraterrestrials), he and Emmett constructed the cellar beneath his farm and furnished it with appliances, plumbing, family photographs, board games and lots of nonperishable food. To see it as the movie’s primary setting is to marvel at the thorough complexity of it all; there is even a moment involving the Michelle character having to crawl through an air duct in order to turn on an air purifier, which permits them to continuously breathe safe oxygen. But are these the delusions of a man with convincing explanations, or is the world above nowhere near as bad as he makes it? When Michelle hears the roar of a car engine above ground, it casts a doubt that the movie uses to gleefully fuel the hysteria of the audience, who is no closer to understanding the actuality than the woman caught in the trap.

It would have been easy for any film to meander incessantly with this idea, especially given how it takes place almost entirely in the claustrophobic rooms of an underground dwelling. The interactions are limited to hushed dialogue and cowering suspicion, and the routine is usually circular; they eat, converse, exchange passive aggressive jabs, and occasionally play games or watch movies. But the movie doesn’t limit its opportunities to use such stoic patterns as platforms for great dramatic fire. There is a moment in the third act when Michelle, driven out of complacence and into silent hysteria by a shocking discovery she makes in an air duct, begins to plot an escape with Emmett; there is dialogue they share with Howard that suggests he is fully aware of their potential ambush, but how sure can we be? The look on their faces is as convincingly anxious as any of the glances exchanged between Clarice and Hannibal in “The Silence of the Lambs.” Both Winstead and Gallagher do respectable work in selling the point, but it is Goodman who pushes it beyond the borders of the standard; it is such a deadpan and convincing portrayal that we watch on with utter fascination, silently hoping that his gruff exterior is but a mere ruse so that the screen doesn’t rob him from us too soon.

But then, just as the movie moves into all the familiar movements of a final confrontation between captor and captive, a climax arrives that hits us like a tidal wave of ingenuity. It is inevitable for Michelle to find her way to the surface in order to grasp the actuality of what happened to the world above, but is she prepared for the answer? Better yet, are we? There is nothing formulaic or passive above what occurs there, and though the details lead to many more questions than answers, they nonetheless set a stage of such heavy intrigue that we thirst for the possibilities of more. The movie is just shy of a two hour running time, but given the shock value of what she discovers, few of us would have minded if the endeavor went on for a while longer, especially with our curiosity so thoroughly roused.

Whether there are continuity links between the film and “Cloverfield” is a question better left answered by those in the audience. Both possess obvious parallels – each concerns a human story that begins at the onset of a shocking worldwide apocalypse – but neither shares stylistic nor continuity links. On the other hand, both films possess the same panache of impassioned filmmakers seeking audacious thrills. J.J. Abrams oversaw the first and yielded one of the great entertainments of the “found footage” genre, and now newcomer Dan Trachtenberg has echoes his sentiments in the frames of a sly, steady and surprisingly serious thriller, where all the jumps and creepiness are roused by performances instead of sensational run-ins with absurdity (though there is no shortage of the latter, either). “10 Cloverfield Lane” would have been a decent thriller even apart from the dedicated portrayals, but with Goodman, Winstead and Gallagher elevating the standard to the upper tiers of seriousness, it is one that will leave behind an imprint long after the initial thrills have settled in the mind.