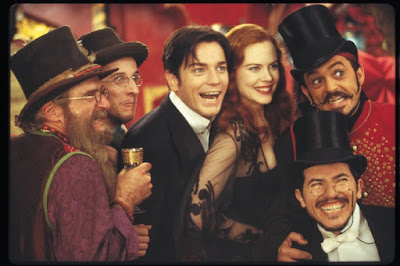 Both sentiments are framed by four key principles: “truth, beauty, freedom and love,” a character often reminds us. They are the mantras of Paris’ children of the revolution, a gathering of aspiring performers who have descended into the rich glut of the city to discover their identity – and hopefully the realization that their desires are more than just elaborate daydreams. If they are to find the answers, their art is what will preserve them. Much of this is emphasized in poignant voiceover in the early scenes by Christian (Ewan McGregor), a writer with a sullen face who once came to the Moulin Rouge with his simple aspirations: namely, to author stories set in the new French revolution, about how love could become the standing force against the tide. And in that journey he is destined to meet Satine (Nicole Kidman), a diamond girl with a starring role at the nearby nightclub, who will inevitably transform his simplistic ideals into a stirring string of sensations that will challenge and expand every feeling he has possessed about the good life, and sometimes with some level of pathos.

What he encountered in those halls is perhaps exactly what Baz Luhrmann hopes we will take from our own observations: the certainty of a volatile universe that must balance love with loss, joy with sorrow, and pleasure with pain. Without one, we are not destined to comprehend the blessing of the other. There is a sense that these concepts are simplified for the sake of basic comprehension, but the picture doesn’t so much strip them of complexities as it penetrates to the core of their meaning. That creates a scenario where the story simply observes the indulgences that manifest in the rhythms, the music, the dance moves, the vocals, the dialogue, the facial expressions and the daydreams that inhabit the characters. It seeks no more profound a purpose. Some find the implication startlingly straightforward in an endeavor where the technical achievements are such a subversive triumph, but I applaud it; how frequently has any ambitious Hollywood production been willing to see past the varnish of a formula and deal directly with the ideals, or done so with such painstaking feeling? The love story at the center of “Moulin Rouge!” is so concisely effectual that it knows nothing of melodrama, cliché or artifice. What happens to the young faces is a pure and honest representation of what we all must face in the journey toward happiness.

The voyage is nonetheless enhanced by a production design that is anything but straightforward. Luhrmann offered hints of such possibilities in his two prior films – the stunning “Strictly Ballroom” and the divisive “Romeo + Juliet” – but by the time his third feature became a glimmer in his eye, his distinctive panache had long walked past the consideration of ambition and plunged right into the resonant waters of fantasy. James Berardinelli of Reelviews referred to it as “sensory overload with gaudy, gloriously overproduced musical numbers that pay homage to the greats of the past while simultaneously outdoing them.” Desson Howe of the Washington Post offered additional considerations: “[Luhrmann] nods at cinema itself with glimpses of silent movie arising techniques, a beaming man-in-the-moon (straight out of the turn-of-the-century films of Georges Melies), and salutations to great screen divas from Dietrich to Minnelli.” That the movie celebrates these notions while simultaneously savoring late 19th-century Bohemian culture and modern pop art – particularly in the music – is a wonder of audacity. And when the material obliterates the structure of continuity in order to allow its characters to sing lyrics from a string of modern top 40 hits, there isn’t an inkling to protest; the director is far too honest about the rules of his madcap world for any of it to seem out of place.

When does it all transpire? One can assume the story is set sometime during the late 19th century – at the height of the Moulin Rouge’s initial popularity – but movie time warps offer no clarity. The lead character Christian (McGregor) has arrived from distant lands as if recently birthed; he is a blank canvas of experience, full of joy and inspiration, who befriends an ensemble of wayward players headed by Toulouse-Lautrec (John Leguizamo) that are struggling to formulate a lavish production for the nearby nightclub. What they possess in artistry they lack in a concise direction, and after standing in for a rehearsal Christian impresses them with the dexterity of his voice. Cheerful banter is exchanged. They laugh, smile, and drink away the Absinthe. Optimistic narration swirls around a manic edit of preparation scenes. And before long Lautrec is luring the young artist into the Moulin Rouge to offer him a taste of the city’s pleasures – not the least of which is Satine (Kidman), the star of the club, who swings highly above the drunken crowds while regaling them with such familiar tunes as “Diamonds are a Girl’s Best Friend.” It takes little to convince Christian that this beautiful woman would be stellar as the lead of his prospective musical, but their interactions reveal added facets: immense chemistry, differing opinions on the power of love, comedic exchanges and even a hint of danger, especially when their infatuation is subverted by the arrival of the Duke (Richard Roxburgh), who intends to woo Satine and exert influence over the Moulin Rouge with authoritarian precision.

The brewing tragedy involves a secret more terrible than any of the characters realize: Satine is gravely ill, and on the verge of succumbing to Tuberculosis. As she keeps the details of this likelihood hidden, her affections towards Christian escalate; during rehearsals, they are seen sneaking away to embrace, although not without being noticed by Harold Zidler (Jim Broadbent), the proprietor of the Moulin Rouge, who has a vested interest in keeping Satine in the company of the Duke. Luhrmann shows the torn lovers at the service of this romantic destiny by building it through sensory elements, including dialogue that runs into the lyrical melodies of half a dozen well-known pop songs from the 70s and 80s. By the same token, the movie does not simply use them for the sake of joyous release; the tone, delivery (and sometimes the inevitable dance routines) reflect the mood of a moment, often varying depending on the strain between the lovers as they attempt to hide their romance from eyes that are destined to harm them. The best of these moments comes towards the last half, when a group of characters performs a tango set to “Roxanne” – the presentation possesses all the drama and urgency of a conflict in courtship, and it helps to underscore the inevitability of a complicated final act, in which Christian’s musical goes off all while the Duke and his rival quietly pull the climax into directions that best represent their own views, all while the prize of their affections inches closer towards a saddening fate.

Where this must lead beyond the certainty of production excess is not a traditional route, Most musicals – original or otherwise – are content to find happy endings while minimalizing the possibilities of loss, but not “Moulin Rouge!” Here is a film that strikes the nerve of the meaning, where two likable – if naïve – personalities are shown the full scope of a romantic destiny that they have idolized beyond reality. What goes on around them certainly colors that impression; the cinematographer Donald McAlpine captures their interactions in a world that seems like a weightless ball of sound and color, and the production design by Catherine Martin (one of Luhrmann’s regulars) plays like the visualization of an artist’s dream, where nothing is out of place and the only malice exists in the souls of villains. And when the obligatory moment arrives where Satine and Christian come to embrace before tragedy strikes, their union is conveyed in a moment so well-timed that it brings all the emotions to the surface.

I did not always sense the power of Luhrmann's conviction – in 2001, I had barely a concept of what romance meant, much less experienced it firsthand – but as the years have plodded on and cynicism has eroded the outlook further, the existence of “Moulin Rouge!” plays like a critical reminder of our humanity. Beyond the look, and far beyond the breathtaking sense of space created by a flawlessly mounted production, this is a filmmaker who saw his opus as a definitive celebration of the culture of love – the same feeling that created the Moulin Rouge itself and progressed through the spirits of all the artists and songwriters that would unconsciously inspire the sound and visual of this movie. To see it in the hindsight of our modern awareness is to be reminded of the complexity of individual existence, and how great art can be the catalyst for the risks we must take to discover our own happiness, whether it be from within or in the arms of someone who possesses the same sense of perspective. Love can indeed be a many splendored thing, but only when it is informed by the experience of a myriad of sensations, even the ones that may lead to pain.