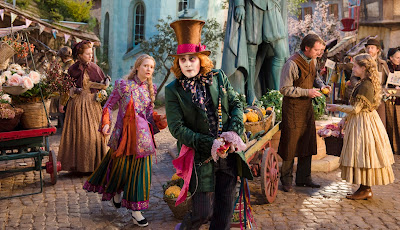 Strange it must be to have a vivid imagination in the charge of a puritan social class. Just ask young inquisitive Alice: a wild spirit whose existence seems to tug at cultural restraints with certain stubbornness, she continues to persist in literary circles as a symbol of free thinking, a notion made all the more relevant since she happens to be a young girl in the era of impenetrable male ego. But what creator Lewis Carroll did to her over the course of two tripped out narratives says just as much about the curse of daydreams as it does about their virtue, even for an archetype. The farther one is willing to wander into the fantasy, the more inevitable the torment. And so Carroll’s notorious “Wonderland” stories dwell in the recess of school memories like awkward encounters with foreboding superiors. Some continue to find delight in the convoluted puzzles of young Alice’s adventures, but as a child I was swept under the tow of their underlying masochism; it’s as if the pages played like records of extreme aversion therapy, detailing all the scary and eccentric things that a girl could encounter without much in the way of joy to drive them.

Inevitably the movies came to visualize those subterranean qualities, and no recent series has been as perceptive as this current one in dealing with the dilemma directly: it ages young Alice into an adolescent with some level of imprudent foresight, the only tool of defense left in a realm that seeks to unravel emotional wavelengths. In “Alice Through the Looking Glass,” her mind is more in sync with the shadow that Wonderland casts than a younger and more innocent adventure would be. That gives the character an advantage to stay two steps ahead of the danger that follows, and though a plethora of obstacles litter her journey, she has absorbed enough from the past to inform further steps. Yet as I watched those conflicts ebb and flow in a story involving time travel, I continued to find fault with the motives of these characters. A living creature only knows the nature it is given, but do the Mad Hatter, the Queen of Hearts or the Cheshire Cat ever comprehend how perplexing and dangerous they have made this endeavor for their earthly visitor? As obligatory as their identities have become in the images we hold of Carroll’s psychotic reality, one wonders if a more adult woman would be apt to slip some mood stabilizers into their teacups.

The picture rides the ambitious coattails of “Alice in Wonderland,” the 2010 live action update of the story helmed by Tim Burton. Of that film, I wrote the following observation: “The movie may be a triumph of technical design and visual ideas, and the screenplay provides the characters with new touches that keep the ideas consistent with today’s movie fantasy, but ultimately, any improvements done to the source material are momentary.” What was a given in his endeavor remains true in this, a follow-up delivered by a relatively new filmmaker named James Bobin. If there is a quality that differentiates them in the thick of such a maddening fable, it’s that Bobin shows a sense of scope in his visuals that relies less on quirk and more on refined edges and alluring backdrops. This becomes especially refreshing news for those who will be led to boredom by the screenplay’s story arc, which is leaden and conventional. The lowdown: Alice is summoned back to Wonderland after many of her friends have observed troubling developments in the behavior of the Mad Hatter (how can they tell, I wonder?). Dejected and isolated, he wanders the rooms of his small hat-making shop – visualized well on the perch of a hill overlooking a sprawling valley – mulling over his missing family, whom he hopes Alice can save. But what can they be saved from, she wonders, when they reportedly were killed long ago by the Jabberwocky? To undertake such a task would require messing with timelines, something seemingly incomprehensible even in a place like Wonderland.

This germ of a suggestion leads to a lengthy series of misadventures in which the conflicted heroine visits the fortress of Time (Sacha Baron Cohen), discovers he is in a nefarious plot with the Queen of Hearts (Helena Bonham Carter), steals a device known as the Cronosphere, travels back across the ocean of the past to alter events in the present, learns details that lead to the fate of the Hatter’s colorful family and restores her dear friend’s faith before he withers away. And so on and so forth. The screenplay is by Linda Woolverton, a staple of many of Disney’s recent live action offerings (including “Maleficent” and this film’s predecessor), but her knack for processing developments under the guidance of a dependable ensemble is upstaged by the convoluted urgency of a time-travel agenda. This is a story that gives Alice far too much to work with in a span of a two hour excursion. That also means many of the key characters tend to drift between nominal focus to total obscurity, especially during the action sequences, and the villainous Queen of Hearts is unwisely propped up in a subplot in which we are asked to explore the origin of her cruelty. When you are a woman constantly screaming for the dismemberment of all those standing in her court, however, who really cares about reasons?

That essentially leaves us at the mercy of mere visuals to stimulate the senses. Many of them are, admittedly, awe-inspiring in their scope. Consider a scene in which Alice jumps across the hands of a giant clock in order to arrive at a palace, or a vast horizon of rich yellow hues where Time stands perched above the cloud, and pocket watches rest suspended in mid-air, each representing a person’s life essence. The production design does not simply offer flashes of these sights in periphery; the camera lingers in their embrace, creating the sense that Wonderland benefits from the skill of seasoned architects. The notion holds true as well during many of Alice’s brief stints in the past, all of which are visualized in a literal ocean of memories that she urgently moves through towards critical junctures. The movie of course adds tension to that journey by having her pursued by the angry timekeeper, and no wonder: without the Cronosphere powering Wonderland’s primary clock, the safety of her friends is thrust into uncertain danger, especially as the mechanism begins to decay.

Alice’s committed portrayer Mia Wasikowska has a good handle on the impossibility of this shtick. Clearly empowered by the weight of the task at hand, she moves through the plot points like a soldier who has studied maps of the battlefield, and occasionally she is accompanied by peers that have the sense to accompany with wisdom. Bonham Carter remains ever-so-dependable as a shrieking voice of insanity in the role of Wonderland’s pompous queen, and Anne Hathaway is cheery and likable as the sister, a queen that may or may not possess newly unearthed secrets. Baron Cohen, meanwhile, has a great deal of fun as Time; dressed in elaborate robes that barely conceal elements of clockwork anatomy, he has a presence of devious showmanship that is apropos for this bizarre reality. Among an ensemble of actors and voice talents that anchor our interest, only Johnny Depp as the Hatter seems to be standing out in the cold. Sure much of that may be owed to the melancholy imposed on him by this story, but what of more innocent flashbacks or lighthearted encounters? There is a vagueness in his delivery that is sometimes sad, other times alarming. Did he feel any connection to this material at all? And if so, what encouraged him to drop the pitch of his zeal down so many notches? Contrasting the delivery here with that of the prior film is like comparing night to day in two different hemispheres: one portrayal is oddly alluring and filled with insatiable charm, and the other is the absence of all those qualities.

Yet the movie is passable entertainment, no better or worse than Burton’s own foray into this realm. The strengths of either are dependent on what you take into them: if you’re a fan of the books then nothing on screen will conflict with your view of Wonderland’s wacky ground rules, and if your values are at odds with the abstract nature of this narrative then you are likely to share in the heroine’s own relentless frustration. In either case, the texture of the endeavor is more than enough to sell the attempt. These are images with some level of depth and distinction to them. And while they may not be in the service of a plot smart enough to advance them beyond their initial beauty, there’s something rather admirable about visual effects artists that refuse to limit their inspiration to the confines of an ordinary story. If you’re a girl who dreams of foolish worlds with talking animals, after all, you might as well paint a portrait worth staring at.