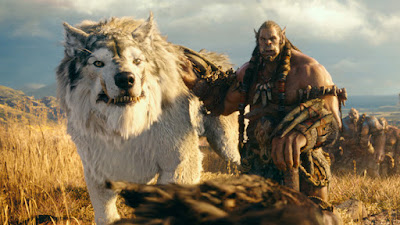 A great many brush strokes of creative dexterity have gone into building the universe of Blizzard’s treasured Warcraft saga, but few of them ever rise to the surface in the first live action movie about the popular game series. How do I know that’s the case? Because I, dear reader, have been an avid player (and reader) of the notorious PC phenomenon for nine years – indeed a treasured pastime that has ebbed and flowed with consistent prominence nearly as much as going to the movies has in recent times. Never one to be loyal to a hobby for longer than a few entertaining months, however, the ongoing hold of “Warcraft” is as bewildering to me as it might be to those unaware of my personal pleasures. It persists like a story you play with in your mind. And that is not an isolated feeling, otherwise the necessity to take the concept into the footholds of cinematic interpretation would have never gone this far. Couple that with the dueling perspectives of video game-to-film trends (seldom successful and usually disastrous) and a reputable director standing at the helm (Duncan Jones, the master behind “Moon”), and what arrives in theaters isn’t so much a standard action flick as it is a predestined clash between cinema enthusiasts and players of the game, both of whom will no doubt be measuring the final result with entirely different gauges.

But I am in that rare niche of voices that can look at the film adaptation from two minds: one as a player, and two as a movie guru who reviews the newest releases. Some perhaps might think of those factors as conflicting perspectives, though I accept them as marks of experience that send me into the upper tiers of qualified voices. That brings us to the consideration of the audiences, of which I join both ranks – will fans of fantasy films be engaged enough to find merit in Jones’ adaptation? If not, will players at least see the endeavor as worthy of the game’s rich legacy? In whichever way you may feel is apropos in critiquing the studio’s ambitious adaptation, alas, the end result is almost impossible to deal with substantially: it is a limp, uneven and odd concoction of conflicting ideals that never really amounts to anything rewarding, especially for those who actually have a stake in these characters and their histories.

There is some level of remorse in that admission. Think of the underlying nature of fantasy and how far the genre has come on screen since the dawn of the 21st century. In the hands of enthusiastic craftsmen, no sight has been left unseen, almost no idea (or lavish visualization) restricted. Relative to that fact, doesn’t it strike you as odd that a story taking place within an entirely new world like this can be made simplified and dull? Or that a place as intricate as Azeroth – driven by a mythology nearly as involved as that of Middle-Earth – could be so uninteresting in the space of two hours? The source of the problem, I suspect, comes down to intention; what Jones and his co-writer Charles Leavitt are selling here is a movie that knows it’s about a video game, not one that senses the boundless possibilities of fantasy. That certainty comes to our awareness in some of the most basic stretches of exposition, especially in the final act. I wager Jones and Leavitt share only partial blame for the concoction they are pitching, and if Blizzard’s filters are as bad as their oversight, then here is an industry they should remove themselves from as quickly as possible.

A mere observation of the early scenes suggests deep-rooted errors. Retelling the events (somewhat) of the first “Warcraft” game from the late 90s, the story deals with the human kingdom of Stormwind as it faces the impending threat of Orcs, a foreign enemy that has arrived through a portal from another world to colonize Azeroth in the image of war-torn barbarianism. What inspired them to retreat from their home planet, however? Thanks to the influence of the strange fel energy (which illuminates a harsh green glow), their home world has fallen into decay, forcing their retreat. Led by the orc warlock Gul’dan (a vessel for said energies), they set up camp in a nearby swamp and begin construction on a massive portal that will allow the entirety of the Orc race to flee into this strange new world, where ancient cultures and their own elaborate societies will inevitably conflict with their wild ideals in a manner that inspires chaos and war.

Scouts of the Orcs wander into the woods near the kingdom. There are ambushes amidst the intrigue. Human warriors capture Garona (Paula Patton), a half-breed Orc, and take her to Stormwind to learn as much as possible about the new foreign threat. Their suspicions are amplified by the attitudes of human citizens – some with gut instinct (Anduin Lothar, played by Travis Fimmel) and others with clairvoyant foresight (Medivh, played by Ben Foster). Though Stormwind’s cautious and patient king (Dominic Cooper) is less eager to wage war before knowing all the facts from both sides, he nonetheless puts his army on the offense against the impending revolt of the Orcs, even when there is an attempt made by the noble chieftain Durotan (Toby Kebell) to form an uneasy alliance with the humans in order to take down Gul’Dan, whose own threats could cost the Orcs just as much as it costs the natural citizens of Azeroth.

Somewhere in the fabric of this premise are the ingredients for an inspired excursion through the values of fantasy. There has certainly been no shortage of evidence to the contrary, even outside of the images on a computer screen; books have been written about the events in the game for decades, and many of them are rather exhilarating reads on their own. But unlike those literary examples, the movie itself isn’t interested in getting to know the characters in any substantial way – it only cares about situations and checkpoints, of which there are too many for a movie stalled at a two-hour length. That invariably leads to many of the key components being moved around on a narrative chess board anxiously as if it were being handled by players who take no time to understand the game’s rules. How, as an example, does a movie about these kinds of situations completely miss the mark in understanding the behavior element of the heroes and villains? There is never a moment where we are allowed to empathize with the humans or orcs, not one scene that relates to them as anything other than objects. There is a significant catalyst made in a later scene when Lothar is mandated to watch on powerless as his son is murdered by the Orcs before his very eyes, but the very delivery of his reaction misses the mark; he doesn’t so much react as he stands there frozen in dead expression, and it is followed by a private monologue that seems adrift of all tangible emotional aspects.

Fimmel’s delivery is certainly flawed, but can he be entirely blamed for an act that seems to be exemplified by nearly every other face standing in the frame? Cooper’s King Wrynn comes off as a walking cliché of royal nobility, Foster’s Medivh gets lost in mystical diatribes of his order, Patton’s Garona is constantly competing aimlessly between the allegiance she has to the Orcs and the sympathy she offers to the humans, and young Ben Schnetzer – who plays the wizard Khadgar – has no dramatic purpose other than to look constantly puzzled and fearful of unknown threats. As an ensemble, the movie plays like the worst of Robert Altman’s nightmares. Where are they supposed to lead? Even the revelatory exchanges are slighted because the movie doesn’t pause long enough for reaction shots, and there are moments where startling discoveries are diminished by the placid ambivalence of everyone involved in the foreground. These are not actors taking cues, they are individuals being allowed to roam thoughtlessly within restrictions like lazy underachievers playing elaborate dress-up.

The production is certainly ambitious enough to deserve something more promising. Sumptuous production design and impeccable art direction give “Warcraft” the essence of a lavish studio epic, and occasionally those virtues are punctuated by convincing special effects (including the male orcs, many of which are entirely made of CGI but have a convincing level of detail to sell the illusion). The minor details – including the visualization of elves and dwarfs – are shoddy beyond belief, but they are forgiven just for the fact they are hardly conducive to the payoff; we get two or three scenes of involvement with them and then return right back to the more important events, which are entirely surrounded by the Orcs and Humans. For Jones, the masterful filmmaker who oversaw the brilliant “Moon,” little of this is surprising: he has a good sense of creating a believable space for characters to wander around in. The question becomes not how far the technical aspects can go in creating a believable world, however, but what they can accomplish inside their fictional habitat. Sitting through this adaptation left me with the impression that I was watching nothing more than overproduced cosplay.

Honest review of what can be expected. Thank you. My husband and my brother are warcraft players as well as many friends of mine.
I will let them know of this review.
Games are usually terrible makes for film. Example: resident evil. Was dissapointing.