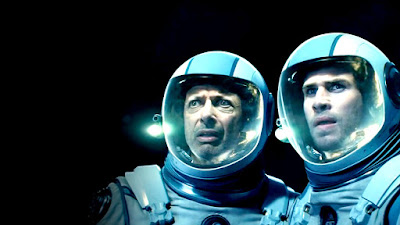 Others regard the earlier picture with fondness and nostalgia, perhaps because it was part of an ambitious experiment of action movies that tapped into the emerging prominence of computer-generated special effects; it sold an ambitious illusion well, and did so in a manner that had not ever been attempted. I was not an admirer of the movie, even though the skill of the visuals was undeniable; too many of the characters were written in a vortex of limited accessibility, and often stared at their predicaments like they were caught in dreamy hypnosis. The immediate dilemma in “Resurgence,” even apart from the razor-thin consequence of the premise, is that the screen becomes immediately occupied with the earlier survivors – some prominent, others marginal. But who wants to see them at all, especially when their entire existence has become a morose consideration of the past rather than a trod through steady recovery?

One of the cardinal rules of good therapy is learning how to see beyond the traumas of the past, but the behaviors of others in this gloomy future conjure bigger questions: namely, how in the world are any of them functional if they’ve wriggled for 20 years obsessively in the echo of chaos? Consider President Whitmore (Bill Pullman), the once-stalwart commander-in-chief of the United States who presided over the nation during its previous encounter with extraterrestrials; now a shell of lost stability who has constant nightmares of his greatest enemies, the movie suggests he is a pathetic recluse dwelling in an emotional prison, and when an attempt is made to show up at a public celebration commemorating the anniversary of the alien defeat, others applaud as if surprised he is even alive. Others, like David Levinson (Jeff Goldblum), displace that trauma in favor of obsessive investigations; when he ventures into a south African territory to analyze the awakening of one of the old alien aircraft, he is shocked to discover that the ship was drilling into the Earth when the species was in the process of defeat (why? – did no one in twenty years of research make that realization before now?).

These actions represent – get this – a suggestion that the survivors are mentally in sync with the consciousness of the alien race, which has waited patiently for two decades to reassemble a sweeping offense against the rebellious humans. Levinson’s theory always has supported the likelihood of their return, and fortunately for the world governments they have prepared for that reality; the remains of the alien ships have been harvested to buff up Earth’s technology, and the group endeavors of nations – all still at peace with one another – have supplemented the defense strategy of mankind, which watches on patiently for the stars to reveal the arrival of yet another alien spacecraft. At one critical point a wormhole opens near a base on the moon, and a circular structure emerges from its depths. Is it a sign from the enemy, or something else entirely? World leaders react violently, but of course they do; even on a planet where nations are able to stall political conflicts for 20 years, the consistent folly of man is that one must shoot before asking questions, even if what they are shooting at may carry secrets that give them an upper hand against the real problem.

“Independence Day: Resurgence” is a silly mess, a loud, arid and predictable retread of an idea that has become so dreary in this age of destruction that even its actors seem bored by the direction of their fates. That gives the material on screen an air of almost comic miscalculation, especially in the climactic passages. Reflect on the most important moment of the first act, when the warnings of others –dismissed as the ramblings of old lunatics – result in the arrival of a space vessel that eclipses the size of the originals. “It’s touching down over the Atlantic!”, someone shouts. “Where in the Atlantic?”, another inquires. “All of it!”, he retorts. The problem is that there isn’t any conviction in how their behavior is molded by the circumstances; they are just reciting generic lines that were invented for them by writers with no concern with human emphasis. Of the many rules the film is destined to violate, the most critical is the underlying – the screenplay was penned by 5 people including the director, perpetuating the curse of modern times that any script containing the signatures of more than three scribes is destined for an ambitious collapse.

All one needs to do is consider the newer faces on screen; at least they are neutral parties. Among a litter of new names that fill the ensemble, the movie also contains Liam Hemsworth playing the cliché role of the hotshot space pilot, Jessie T. Usher as the commander with grudges against the Hemsworth character, Maika Monroe as the daughter of president Whitmore (who has obligatory attachments to both of the young men), Charlotte Gainsbourg as an inquisitive scientist studying the strange markings left behind near the crash sites of the alien spacecraft (she may also have romantic interest in the Goldblum character, I think), and Deobia Oparei as a stern-looking rebel from Africa who knows a trick in killing the alien beings. Any movie that has this sort of roster of talent ought to be blessed with such virtuous casting choices, but here is a movie that squanders them in a plot that sees only three formulaic characterizations: depressed witnesses, ambivalent wisecrackers or soulless onlookers. Another scene involving the assembly of millions of Americans on the grounds of Washington D.C. emphasizes that ambivalence further; when a voice rings out over the loud speakers that everyone needs to vacate in a calm and orderly fashion, the retreat is seen in a quick and broad stretch of camera shots that never take a moment to emphasize a genuine reaction. Are they living beings, or just dots on a landscape destined to be erased?

These realities are not meant to suggest that the film is a painful insult to general human decency or anything. It doesn’t aim that high. And indeed, the film’s main illusion – certainly the primary driving influence of any sequel to this story – is top-notch; the alien spacecraft hovers on screen with a certain skillful level of detail, while the inevitable disaster sequences are ambitious to a fault (one, involving a city that is destroyed by the ship’s own gravitational field, is downright spectacular). They just don’t add up to anything substantial on their own, and Emmerich is too content to trap his survivors in a space of insufferable idealism to make the visuals amount to anything (what is the practicality, really, of total world peace for 20-straight years, even if alien forces are quietly threatening you beyond the stars?). There is a moment in the middle of the picture when one of the early survivors is seen on the top of a collapsing building, struggling to save a woman who has just gave birth. For a brief second there is a race against time as a helicopter attempts to save her from death. Will she grab onto the helicopter rail before the building collapses, or will the pilot be a hair too late? Most movies at least inspire us (even if briefly) to favor a positive outcome, whereas those of us in the audience of “Independence Day: Resurgence” are too bored to care either way.