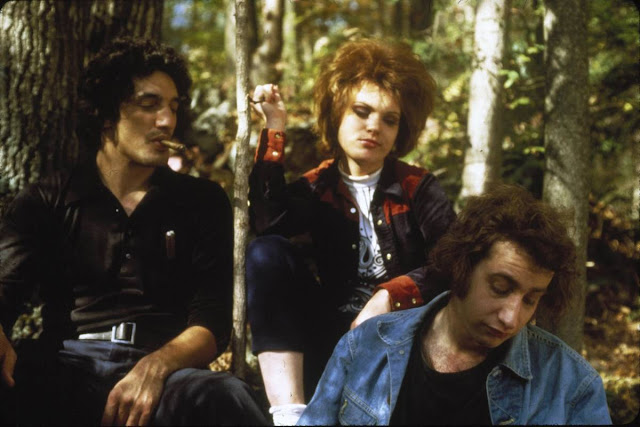 An enthusiast of film beyond the measures of his genre, Craven did not set out with intentions that could be reduced to one-note resignations, and his film did more than just exaggerate the blood and guts: it provided an audience with a serious consideration of the criminal mind, in which gray areas could drive even good-natured people to shameful acts. Yet these ideas were not mere horror devices, they were projections we refused to face in ourselves. Arriving in 1972 just before the genre began to transition out of a supernatural monopoly and into a more thoroughly scoped psychological connotation, the movie delivered deafening blows and appalled a good majority of its observers before eventually being absorbed into the zeitgeist of important genre achievements. Those who endure it today may be beyond the point of seeing the violence as harrowing, but the torn heart of the film sticks with us as easily as the scar of a wound. So long after it appalled many, we accept it now as a monument of the necessity of risk.

“Last House on the Left” was one of a handful of horror films I first reviewed in my early years as a student of the cinema, and indeed that first article – which was quoted in the packaging of the Blu-Ray release – reads like a document of clashing values between a skilled puppeteer and a naïve observer. Rarely had a movie so thoroughly shocked me to the point of discomfort, and even fewer among them had been able to push the boundaries of the acceptable without crossing them. But I wasn’t entirely aware of its underlying intentions until much later, well after the gore had lost some of its bite. I have returned to it rarely over the years – mostly out of neglect – but when I do there is never a moment that I do not sense the deep drive of the screenplay’s psychology. Many pictures molded in the same vein often lose that effect due to the numbing of individual emotions; here, in a film where two girls are murdered by a group of escaped convicts, not a single moment is done with superfluous intention. It’s as if the director and his actors legitimately believe this is happening.

Many, nonetheless, assumed far less based on the origins of the material. Nearly every facet of Craven’s structure is derived from Ingmar Bergman’s “The Virgin Spring,” a famed 1961 opus that had a notoriety of its own: as the first movie ever screened in American cinemas that contained a rape sequence. Craven had touched briefly on the correlation over the years but often spared us a justification of his gratuity, perhaps because the nature of the violence stands outside of a conventional rationale. The concept is hardly an obtuse diatribe, though. On a seemingly ordinary night, two girls venture into the city – and away from the docile foundation of the countryside – to attend a party and wind up detouring into the lair of four strangers, hoping to score some marijuana. Their lure is Junior (Marc Sheffler), the drugged-out son of the gang’s ringleader Krug (David Hess), who meets the girls outside a shady apartment building as they are moving enthusiastically through the streets. He promises them what they seek, but only if they journey upstairs with him. There, against the instinct of skepticism, the girls fall into the trap of four lunatics who are hiding from the police after two have escaped from prison.

What were their crimes? Ominous voices on a radio broadcast paint a grim portrait of murder and abuse, some involving religious officials as the victims. Their escape seems oddly simplified in a reality that ought to keep tighter restraints on violent offenders, but Craven cares more about the dramatic pull than the logistics, and not just for exploitative measures. The central figures are Mari (Sandra Cassel) and Phyllis (Lucy Grantham), young friends who share little commonality in the way of survival instincts; though Mari is naïve and inexperienced, Phyllis possesses a fearlessness of conviction. Their pairing is a necessity to create opposing uncertainties in their survival, and though it is the destiny of this story to see only fatalism ahead, an underlying hope keeps us leaning forward in anticipation, even as the possibilities are dashed by the harshness of the tone. The painful implication that viewers refused to recognize in most early low-budget horror outings was that relief usually came only when the sufferers experienced death – that without it, agony would persist, and the horrendous appetites of the tormentors would move consciously through the celluloid like a force of depressing certainty.

Far more menacing facets emerge after the plot moves through an initial heap of shocks. The girls are kidnapped, taunted, humiliated, tortured, raped and even mutilated before they are disposed of by their crazed assailants, though not without some level of ironic fallout: their final breaths take place just beyond the woods where Mari’s parents live, which will just so happen to be the place the killers seek refuge in when they hide from anxious legal authorities nearby. There are overlapping motives to this approach. Two cops seeking the convicts are shown as flyweight morons incapable of handling responsibility; most of their scenes show them narrowly missing leads, backtracking unnecessarily and even getting stranded after failing to gas up the squad car. Mari’s parents, meanwhile, anxiously prepare for their daughter’s surprise birthday party in a manner that underlines wholesome behaviors. Not unlike the parental figures in “The Virgin Spring,” those routines are a device to insist jarring contrasts when they are struck with insurmountable grief, just as the men who murdered their young daughter are brought to their doorstep. And of course neither side knows who they are dealing with initially, giving their first encounters a disquieting quality.

The vital difference, perhaps, is that Craven replaces the contemplation of fate from Bergman’s film with more coarse horror conventions. This is about the act of vengeance, as experienced by those who never comprehended it until they realized the world could be a nightmare nestled inside a fragile illusion. What Mari’s mother and father feel at the critical moment is a trigger that removes them from the clarity of their own value systems, shamelessly trapping their emotions in the throes of desperation. Though there is never a suggestion here either has experienced violence in the past, in some twisted way that adds sincerity to the slaughter they undertake. Is it possible that they are more than just ordinary middle-class civilians? Do they have a religious upbringing like those in “The Virgin Spring” that underscores their medieval-like punishments, or have they quietly adopted the philosophy of hard justice? The disturbing depth of the violence they inflict is so insistent and unflinching that we ponder these possibilities even as the film shows little incentive to find a deeper meaning. While the approach certainly simplifies the values of the premise, the story’s sincerity discovers something more barbaric: a seriousness in context that we can’t turn away from.

Few sensed that knowledge early on, and indeed there remains a disdain in some film circles for the lengths Craven and his actors would go to suggest such depravity. The technical values of the film, furthermore, brashly reflect the shoestring of a budget. Nearly all the shots are handheld and chaotic (sometimes blurred, unintentionally, to the point of confusion). The score consists of little more than contemporary radio songs rather than original compositions, which distorts the emotional cues. Many of the critical exchanges are badly dubbed over (a staple of early b-pictures, where sound equipment was undependable), and the transitions sometime seem unnecessarily jarring in tone, usually because the superficial banter has an unrealistic quality. But there is a rhythm to this arc that persists firmly through the material as the characters audaciously move from one deplorable deed to the next, and rarely are they shown to the pinnacle of their potential (the final murder, for instance, is shown from an angle that obscures blood spatters and entry wounds).

That this would all be followed less than two years later by Tobe Hopper’s “The Texas Chainsaw Massacre,” another catalyst in the genre’s evolution, is not coincidental. Both movies emerged from a need to deal with the horrors of a tangible reality, and neither was all that coy in playing on the fears of audiences with weak stomachs. But there is a restraint to the visual push of “Last House on the Left” that keeps us closer to the subtext of this thesis, I think. People are capable of inflicting great pain and suffering on others with scarcely a consideration of decency, and those that do often walk among the rest of us wearing a mask of common courtesy. Who is to say that any one of us could not become a Mari or Phyllis with one wrong turn? Or that we could not walk a mile in the shoes of the parents, and potentially allow our grief to shatter basic moral boundaries? Craven’s audacious debut was conceived in the milieu of a low-budget shockfest but weathers the curse of its intentions even now, forever reminding us that our fears are greater in the face of mortal danger rather than the supernatural. And it is all the more important for understanding that thesis within a purpose of greatly challenging horror.