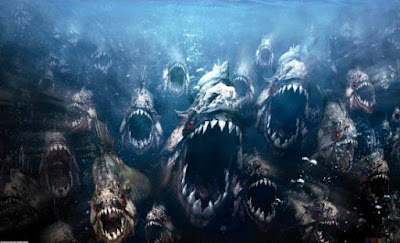 Assume a little innocence for a shred of a moment. Is it fair, really, to be critiquing an endeavor that seems this far removed from the possibility of judgment? I ask myself the same question more than I should, and no doubt there were times during a recent viewing of said picture when I contemplated my very role as an analyst. A narrow margin of B-movies has emerged in the recent years – one online critic refers to it, affectionately, as “the ‘Sharknado’ effect” – that defy the mold of mindless entertainment, and they are often pitched with gusto and flair that glosses over the absence of basic charm. As I watched that trend come to full scope here, I was nearly overwhelmed with a sense of hesitance. I am not obligated to bother with these kinds of films, and would be perfectly content to allow them to serve their purpose as background distractions for the dimwitted and gullible. But another and far more prominent part of my soul knows the difference between exaggeration and a rip-off. Is it at all possible for any sensible person, dimwitted or otherwise, to not walk away from the experience of seeing this muck without experiencing the urge to punch a wall?

The movie’s greatest crime involves a basic lack of comprehension. Consider the bare bones of this premise. After the events of the previous film, involving the discovery of a nearly-extinct species of carnivorous piranhas during a public outing on Lake Victoria (and the subsequent massacre), residents of a town in Arizona are enjoying all the frivolity of summer vacations when a new threat emerges: the arrival of another wave of bloodthirsty fish from deep within the bowels of Earth. What brought them there isn’t so important as what they are capable of doing, which apparently amounts to a lot; there is a later scene featuring Christopher Lloyd as a marine biologist explaining the inevitability of evolution, leading to a shot of one of the piranhas crawling on land with feet it has sprouted. But never mind. The point is that the film makes no rules for its predator, basically, to circumvent the boundaries of its prospective narrative, which will in turn allow the fish to do such dubious things as sneak into a woman’s uterus and then gestate during a sex scene, where it must bite into the man’s genitalia.

The key twist involves the town’s local water park, run by the sex-hungry Chet (David Koechner), facing impending danger when it is discovered that the piranhas are attracted to the smell of sulphur, apparently having to do with the geothermal habitat they once thrived in, and that traces of it exist in water treated by chlorine. Furthermore, the park is siphoning its water from an underground lake to avoid paying city fees, which conveniently provides the fish a direct transport into the pipe system. All of this comes to a head, as it must, in a climax that is preceded by all the typical close calls and ambiguous death sequences that are a norm for creature features, though these don’t have the benefit of inspiring much beyond gruesome observation. One of the first feedings occurs when two teenagers in a van mistakenly release the parking break as they are preparing to have sex, and the man has been handcuffed inside just as the key goes missing in the rising water. The moment is preceded by an almost precious setup: the two pray for forgiveness for engaging in intercourse before marriage, just as their clothes are ready to come off. Is the arrival of the piranhas just coincidental, relly, or is it God’s way of saying he doesn’t approve of their tryst?

The CGI used to render the piranhas is so bad that it defies explanation; they look less like menacing fish and more like cartoon blobs obscured by the blur of murky water. On the rare occasion that we do catch an image with clarity, it’s usually just to point out the sheer absurdity of the creation – perhaps, if anything, just for a howl. But the movie isn’t aimed precise enough to inspire those sorts of chuckles. None of the characters pay the endeavor forward either, normally a behavior we can expect in more campy B pictures – they just kind of stand back and allow themselves to become mindless bait for the fish, rarely conscious enough of the situation to react out of survival, much less cheeky self-awareness. The primary character, in fact, is so utterly clueless about the dynamics of the situation that she barely even registers a reaction when she is nearly killed standing on a dock as piranhas destroy the floor boards beneath her. For some that prospect could suggest a degree of stupidity that in itself is humorous. I recoil in boredom by the notion that any movie, especially an absurd one, can’t give a single character a single amusing line as an anecdote against impending danger.

Contrary to the suggestion, there was a method to the original “Piranha” films. Those involved with the other pictures had the foresight to know they were working within the restrictions of low-brow formula, and that a clear path to enjoyment involved less serious sentiments in a framework of colorful theatrics. I find such pictures funny, even if they are disposable at best. But not even the most basic mind is going to find anything funny or amusing about “Piranha 3DD.” It is a crude onslaught of nothing, wrapped in a package that is excessive to the point of exhaustion. The primary clue is the title, a double entendre for the movie’s two most prominent assets (shoddy 3D and oversized breasts). You know you are in trouble when boobs popping out of the screen are supposed to be the motivating factor in a picture about ravenous beasts lurking below the surface.