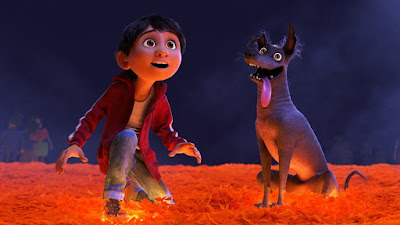 Any number of recent mainstream cartoons that find their way to theaters are in some way about the importance of family values, but Pixar’s “Coco” is the first in a while that is truly sincere about the concept. Never is there a sense while watching it that artists or filmmakers are weaving an illusion that is at the service of a shallow impulse, nor does it inspire the urge in us cynics to pick apart the formula in secondary exercises (a behavior, I willingly admit, that I used in Disney’s recent “Moana”). Like a drill plunging to the depths of a rich reservoir, here is a wonderful little film that finds a powerful source of inspiration while others barely scratch the surface of their wisdom, allowing many of us to forget we are hardened adults diminished by experience. For a precious few minutes I was not merely a movie enthusiast – I was a kid entranced by a spell, in a place of splendor and sensation, joining characters on a quest that felt created by magic rather than the pens of ambitious scribes. And if the feeling remains true that the studio’s output is as rewarding for adults as it is for children, their latest strikes an even more elusive chord: one that transports the oldest of codgers back to a time when our innocent young eyes were starved for exciting adventures.

The young hero of the movie thoroughly evokes the meaning of that wonder. His name is Miguel (voiced by an enthusiastic Anthony Gonzalez), and like many of the eager Disney protagonists he is seen wide-eyed and anxious when it comes to the subject of his interest: in this case, playing a guitar and singing rousing songs. Unfortunately, he is also the youngest in a family of shoe builders who have forbidden the presence of music in their domicile, a reality that is emphasized in an obligatory backstory where the family’s great grandmother is abandoned by her musician husband and never heard from again. This inspires a generational shift in sensibilities that eventually must be contradicted by a child born with those forbidden talents, of course, and in between schoolwork and shoe-shining Miguel frequently sneaks away to engage the town’s musical talents. The cornerstone of his muses, furthermore, is the great Ernesto de la Cruz (Benjamin Bratt), once considered the most popular guitar player in Mexico and now a posthumous muse for any kid eager to chase his dreams.

Ok, so that’s the conventional formula of any number of animated yarns of the last few years. But “Coco” does something even more adventurous than its premise implies – namely, allows the young lead to venture into the world of the dead on Dia de los Muertos, where he will be destined to encounter his deceased relatives in an ambitious attempt to change their outlook on his youthful interest. Circumstances necessitate that journey; after Miguel runs off following a key family discovery, he decides to join a local talent show and finds himself without a functional guitar, leading him to the tomb of de la Cruz where he audacious snatches the famed instrument off the mausoleum wall and opens a portal between both worlds. Though the famed Day of the Dead is a staple in Mexican culture with no shortage of foundation, the animators visualize this afterlife with implicit wonder – a colorful city that seems to stretch beyond the limits of ordinary eyesight, filled with skeletal figures whose personalities have hardly been diminished by their passing. And somewhere in this labyrinth of streets are the sources Miguel must appeal to for safe return to the world of the living: de la Cruz, his personal icon, and Mama Imelda (Alanna Ubach), the fiery matriarch whose experience in life provided the roadmap for all those that followed.

In true Pixar fashion, nothing remains simple. A dog – and loyal companion – follows Miguel from one realm to the next with no obstruction, suggesting he may become an asset against dangers that arise. A streetwise sidekick named Hector (Gael Garcia Bernal) emerges to offer guidance through the land of the dead, and may harbor precious secrets that could change the outcome of Miguel’s journey. When the core family refuses to offer their young visitor a free pass back to the real world unless he entirely gives up the need to play music, he is roused to rebellious tendencies; instead of honoring that wish, he seeks an audience with de la Cruz, potentially his own great grandfather, in hopes he would grant unconditional passage. But can such an endeavor be undertaken in an afterlife where the musician is still among one of the most in-demand celebrities? When knowledge reveals a celebration occurring at his mansion up in the hills, how will Miguel gain entry to it? Will there be any chance he will be taken seriously?

Some fundamental part of the audience knows all things are possible in this kind of daunting quest, but rarely do the circumstances rouse such a humorous and good-natured excursion. The movie is so much more than just its grandiose surface; an engine of intelligence, heart and soul move these characters forward with impeccable enthusiasm, and they are surrounded by story elements that amount to great discoveries. One of the more moving details of this world involves the endurance of the human spirits who dwell there; it is said that if no living being remembers a person, their soul evaporates from the land of the dead and is never to be seen again (a second death, if you will). That detail recalls the heartbreaking reality of “Inside Out,” where an imaginary friend fades from existence when its creator no longer has memories of them. And of course that prospect will provide a specific sense of tension during the climax, when a key character too risks fading from reality when the last living soul on the other side comes dangerously close to losing the last of their memories about said person.

Children will contemplate this as a lesson about those they love. Adults will sense broader implications, including the value of passing down traditions and memories of those that came before them. If those go to the route of the Mexican holiday, “Coco” weaves an elaborate legend to underscore those sentiments. The movie is a triumph to its source. And just as we are engaged by the events propelling the key characters, their struggles weigh heavily, as if sharing the stakes of potential outcomes with the audience. Then there is a wonderful scene towards the end between Miguel and his grandmother Coco, involving music, that may be one of the most emotionally complex of any Pixar film. Think of the effortless pull of emotions going on in the final sigh of “Toy Story 3,” or the breakdown of the young girl in “Inside Out.” It’s no longer just enough for these animators to whisk their viewers into an elaborate fantasy of awe-inspiring destinations; they must mean something. Whereas most of the common CGI cartoons now talk up their prospects without walking the long mile, here is a studio that continues to transcend the baseline.

What nerve do they have? What gall drives them towards something so resonant, so above the standard of the modern rulebook? It is a custom that is rooted in the exhaustive origins of the Disney doctrine, in which a yarn told more than a story but also provided the deep moral lessons that could shape the psyche of young imaginations. Nowadays many of the animators are driven by the technique rather than the vision, and many find that satisfactory (especially as box office returns continue to allow even the marginal films to prosper). There can be a good time buried in the frames of something middling, especially when that’s all you seek. But if twenty years of creative thrusts have taught us anything about Pixar, it’s that the old tradition remains alive and well in the hearts of those who still sense a soul in a meaningful story. “Coco” embodies the hope and promise of what animated films can be.