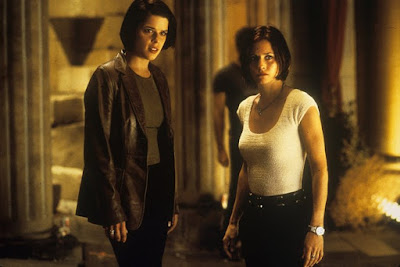 Is this a critique of horror films, or just a moment of excitement in the service of the more intellectual viewers? Asking a question like this goes to the soul of Wes Craven’s entertaining series, which has also undergone enough transformations across time to understand, mimic and bend the convention for the sake of a stimulating conversation. The second picture in the franchise, released only a year after the well-received original, remains the most incisive: a sharp collection of observations strung across two hours of bloodshed, intricate motives, pointed cultural references and nearly flawless examples of well-modulated tension. It is the film Craven seemed destined to make after his knack for intrusive scrutiny elevated him into the big leagues of popular horror showmen, and more than the likes of De Palma or Shyamalan he was almost effortless in his emulation of the Hitchcock mantra, where audiences are stirred by contrasts and buildups more than fatal stab wounds.

Two scenes in “Scream 2” embody this theory. The first occurs towards the end of the second act, when the characters of Gale (Courtney Cox) and Dewey (David Arquette) attempt to unravel the mystery of a new killer on a college campus who emulates the homicides of Woodsboro. She, you will recall, is an opportunistic news journalist who is always looking to score interviews with victims, and an early encounter between she and Sidney (Neve Campbell) is essentially repetitious history. Dewey, a former Woodsboro deputy, once carried a torch for her but has emerged jaded and disgruntled after unkind things have been said in her book (“Dewey oozes with inexperience,” he angrily quotes during one run-in). But now they arrive midway into the story, rattled by a significant murder at her news van, go to investigate leftover tapes, realize their attraction in the editing room, begin to make love, and are thwarted when the footage shows all the previous victims being spied from a camera in the killer’s possession, just before it cuts to a shot of them in the present from directly behind.

The second, occurring not long after, transpires after Sidney, now a campus student studying classic drama, has been whisked away by police body guards. At a stop signal, the masked murderer ambushes the driver and a crash ensues, leaving the villain unconscious in the front seat and two sitting ducks locked in the back of the squad car. Of course, each must now climb over the partition and across the lap of the killer to escape, but will he awake midway into their cautious crawl through the driver side window? Here is Craven perfecting the whole notion of “the bomb under the table,” a stylistic device in which the audience is driven to dread by an uncertain outcome; the almost paralyzing terror of waiting for an attack is even greater than what potentially may come after. In many ways the movie was playing against the convention of its times – the late 90s slashers were the most vulgar embodiments of their classification, with little irony or wit separating them – but there was an underlying method to the intention. Just as Kevin Williamson’s screenplays were giving the characters of a genre picture the awareness of their situations, so was the director departing from the standard practice of hack-and-bleed situations. Almost no other release of the time has survived as long in the ongoing public commentary the first two entries into his most famous franchise.

If audiences at the time had been mobilized by the precision of the director’s stylistic hand, so too were they rattled by key reveals in the final act. Legends persist, even now, of a convoluted shooting schedule in which multiple drafts of the script kept the stars consistently guessing the outcome of their characters. Various versions of the ending were shot, with each suggesting a different identity behind the mask. Only on the eve of the premiere would cast and crew members come to learn the truth of the climax just as the audience would – Craven and Williamson had developed such a precise element of secrecy that it was as if they were predicting the very culture of the Internet, where revelations could be diminished by anonymous pranksters hoping to spoil a surprise as a shameless grab for attention. Those endeavors remained ironclad well through four films, although the precedent they set has rarely been replicated; now, in the age of social media and smart phones being carried around on closed sets, secrets are rarely allowed to retain their mystery into opening weekends.

What makes the finale of “Scream 2” work, perhaps far better than any of the others, is how it handles a myriad of histories and overlapping motives in a single scene, without overwhelming the agenda or its targets. Two people have it in for poor Sidney, and not without some deep-rooted motives – one killer, for instance, is driven by “plain old-fashioned revenge” because of her part in a prior death. The other, more a liability than a schemer, has an idea of blaming the movies: they are the tool for which his homicidal tendencies have been allowed to develop, and that will be the defense during a trial that plays in the periphery of his warped mind. For Craven, Campbell, Arquette and Cox, the four constants in a series of films that collect the wisdom of their times, there is no absolute to the truth behind a homicidal spree. Others regard the scenario with sparing enthusiasm because they are weighed down by gratuity, pathos and cynicism. Here are people who refuse to run very far from the knife, lest it prevents them from turning around and pointing back a more sharp and scathing honesty.