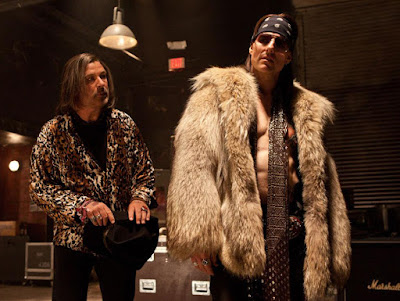 One does not so much watch the movie as they stare on in maddening disbelief: it is a long, tiresome, awkward example of what we now know as the “Glee”-style of musicals, in which one-note characters gather and allow the words of famous songs to tell whatever stories they bring to the table. Thus far, few of them have had something stimulating to exhibit; much like the show that defined this new trend, recent films like “Joyful Noise” and the “Pitch Perfect” series exist primarily to celebrate a culture that must reimagine the classics of the past without any of their spirit or zeal. Furthermore, the singing voices usually lack character; they belt out the songs with the inflection of a clueless underachiever, using the lyrics to show off vocal ranges and nothing of soul or understanding. So much of that makes its presence known in “Rock of Ages” that one knows from the first minute they are in for a painful excursion: the opening scenes gather a series of players who all happen to be singing along to the same 80s track, and their delivery is marred by the undercurrent of a superficial delivery. If we do not cringe from the thought, it’s because we’ve already been rendered disinterested by the whole approach.

Why make the movie at all? If the director, Adam Shankman, is not primarily motivated by evoking the nostalgia of his era, then he is intoxicated by the idea of gathering an ensemble of notable names to sell his mission. Chief among them is Alec Baldwin, who plays a head-banging nightclub owner named Dennis Dupree nearing financial ruin as the spirit of the rock namesake appears to be moving out of mainstream trends. That does nothing to curb the enthusiasm of a pair of youngsters in his midst, though: a barhop named Drew (Diego Boneta), who dreams of one day writing one of the great rock anthems, and Sherrie (Julianne Hough), an out-of-towner who arrives seeking work while quietly sharing in Drew’s aspirations of solo stardom. Movie conventions dictate that both characters will be drawn to one another romantically, especially as they find commonalities with their taste in music, and the subsequent scenes usually involve them walking into song-and-dance numbers at record shops while they fawn over each other’s beautiful faces.

Unfortunately, like all realities, their bond must be tested in the thick of momentary conflicts. As the shadow of a dwindling fanbase looms over the club and its enthusiasts, Dupree and his right-hand man (played by Russell Brand) work nervously to secure the appearance of Stacee Jaxx (Tom Cruise), whose elaborate rock star lifestyle has made him notoriously undependable and despondent (a selfish agent played by Paul Giamatti does nothing to soothe that reputation). Unfortunately, he is also the most celebrated of his culture, and hosting his concert could change the trajectory of Dupree’s financial luck. That becomes especially pertinent as the political climate of Los Angeles sees rock as the root of all evil and corruption in society, and here the movie visualizes that dissent in the form of a straight-laced mayor and his eager wife, who stands at a podium in one scene and snarls the following dialogue to her constituents: “This man, THIS man,” pointing to a picture of Stacee Jaxx, “is responsible for so much filth! He’s like a machine that spews out three things: sex, hateful music, and… sex!”

That’s Catherine Zeta-Jones, sounding suspiciously like she is faking orgasms with each spiteful sentence of her long diatribes. Admittedly, she moves with a certain skillful precision that would be fitting in a more perceptive film, like a satire; here, it’s just wasted energy on a plot that must circle through all the formulaic passages of its premise, including an inevitable sequence in which she makes a private confession that emphasizes her impassioned dislike of the Jaxx persona. Cruise, unfortunately, doesn’t have nearly as much fun as the dopey rock god; he lumbers through his scenes less like he’s trying to channel the lifestyle and more like a man who is sleepwalking his way into an easy paycheck. His most salvageable moment is noteworthy, unfortunately, only because of his co-star: in a scene of such audacious clarity, a music journalist played by Malin Akerman rips into him for crapping all over his legacy and, inadvertently, awakens him from the haze of his booze-fueled pattern (this ultimately seems like foreplay, of course, so that both she and him can become linked romantically by the climax). Akerman plays the material as if she is making the best of a situation that is stilted. In some ways, we admire her for that: while everyone else is catering to some sort of sincere illusion, here she is staring back at it with her best poker face, like a hammer destined to crack the ridiculous façade being pitched to the audience.

The glue holding all these subplots and character motivations together, of course, are the songs – some great, others catchy, and a few others perfectly suited to particular moments (even if you don’t find yourself caring to hear them again). Almost none of them come close to surpassing the originals. Apologists would argue that is hardly the point. Then what is? Wouldn’t it have just made more sense to discard the idea of having anyone sing, and instead let them bond over listening to the originals? A much more compelling excursion utilizing this idea was “High Fidelity,” about a trio of record store clerks who come to intellectual realizations while music provides a resonant backdrop. The fundamental flaw of the conceit driving “Rock of Ages” is that it is destined to water down every notable influence it touches. Only Mary J. Blige, who shows up halfway through the ruckus as the manager of a seedy strip joint, seems interested in doing something distinctive with the music; her voice elevates the melodies instead of drowning them down in flat deliveries. A better idea: make a movie about her and throw out everyone else.

I am warned, of course, that the film is based on a musical that is much more celebrated. That does little to ease my dislike. Film already provides a questionable filter for the mechanics of a live show, but to see one such translation in the time of already-dodgy standards for recorded adaptations is to be reminded, harshly, of an ongoing reservation with movie musicals. They rarely work. And what’s more, they don’t work when they are conducted by filmmakers who restrain the camera as if pulled back by the limits of a virtual stage. Adam Shankman is certainly a competent director, and even made the film adaptation of the “Hairspray” musical, which wasn’t completely bad. What attracted him to this bland monstrosity? And why does his style seem subverted in a film that ought to seem liberating and celebratory? He may be functioning with that morose tinge of a mindset where the memories are more powerful than the recreation, and any attempt to step into them is a sad reminder of how nothing will ever be the same.