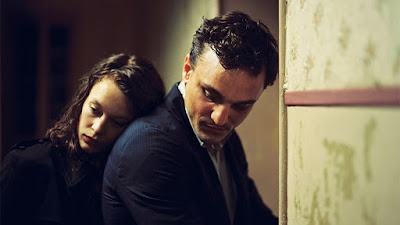 Details this coincidental more reflect the devious values of the great noirs of the 40s, when the likes of “Detour” – also about a man pretending to be a dead man – and “Double Indemnity” showed people latching onto strange circumstances simply because it eased the pressure on their own unfortunate destinies. Yet “Transit” is not so much a film in that tradition as it is a clash of its more timeless values, where the story and characters function to a greater purpose than a slog through their own shadowy skepticism. The sort of luck – good or bad – that follows young Georg, the lead, is also not at the service of dubious dealings or questionable integrity. This is a decent man, full of goodwill and kindness, rendered a silent observer in a world he never adapted to. And when the movie pauses to spy him sharing moments with a lonely kid who loves soccer, their bond is not contrived as a distraction from the main plot; the man sees a face that does not yet know all the cruelties of the world and wants to inspire a few brief smiles before the clouds move in.

What is his story? What is he compelled by? And what exactly will he, along with everyone around him, attempt to escape from? The movie no more cares about his past than it does the specifics of its own political climate. Dialogue provides all the perfunctory clues (German invasions, occupied territories, foreign rebels), but are these Nazis during the second world war closing in on them, or something more current to reflect the more modern immigration tensions of present-day Europe? The director, Christian Petzold, plays cagey with the details. Notice how his characters look vaguely period in their dress and makeup, but not directly inspired by it. Also observe that there are no cellphones or technological conveniences on screen other than radios, but then contrast it with the way the characters talk – hardly reserved or formal like you would expect them to be in the distant past. One could argue that the urgency of the fascist occupation – not to mention the spreading awareness – suggests the current era, but if that were the case, wouldn’t the impending violence have been more frontal? Here the camera drifts against the rising tide of persecution like a witness dying to look away, too afraid to see what horror might come next.

In a way this all gives “Transit” a fascinating, timeless mystique. Tomorrow’s audiences could discover it decades from now and find it as sharp as the day it was made. What they might also pick up on is the depth of the moral challenges Petzold quietly buries beneath the trajectory of his otherwise straightforward story. Every scene of his movie permeates the deep yearning of individuals who want desperately to love, be loved, and exhibit kindness to others, even when the world around them seems more concerned on devaluing their very existence. That is a dichotomy that has fascinated him enough to inspire several pictures in his filmography, including his last, “Phoenix,” which was one of the most revelatory movies I have seen: it took a famous premise once perfected by Alfred Hitchcock and used it to underline a profound observation on the function of human relationships, particularly those in which hearts belong to people on the other side of political persecution.

If he is an artist concerned with the more challenging nuances of that dynamic, then “Transit” shows him in the full loving embrace of cinema’s great promise. His is a film that is nearly perfect in how it laments the way people deal with one another, whether it be on busy streets or in the privacy of rooms, and how truth can rarely be confronted directly when the people involved are looking distrustfully at their own personal realities. The great dilemma in Georg, certainly, is whether he will ever be able to tell Marie, the writer’s widow, that he is dead or that his identity has been absorbed by him, but while most movies would use this detail to close in on probable dramatic tension, this picture walks wistfully past the most sensational outcome. That is not out of disinterest, but out of something more meditative: the eventual realization that circumstances may be so out of our control that we use them to function as we must, without being directly deceitful or corrupted by them. There is a key scene in the last act in which Marie, expressing concern about her lost husband and the visa he carries for her, is offered passage out of Marseilles by Georg. She isn’t certain how he can provide one but doesn’t pry. Nor, for that matter, does he disclose the fact he is using the writer’s identity to provide that outlet for her. Our primary instinct is to curl up in tension as we await the inevitable discovery between them, but it never comes – instead, it leads to a moment inside a taxi where George is compelled to do right by her while bowing out of his own masquerade. Think about how many mainstream films would choose that route, especially when the temptation is so great to concede to the more explosive behaviors.

These feelings are enhanced by performances that penetrate to the soul of their meaning. Young Franz Rogowski, who plays Georg, moves through this arc less interested in reactionary waves and more invested by the subtle exchanges he has with others. The many moments he shares with young Driss (Lilien Batman, also quite good) are at the heart of the matter; they show a man who is willing to adapt himself to the needs of those in his sphere, not to be deceptive, but for the sake of providing them the source of comfort they quietly crave (the literal connection: Driss’ father is the man who died aboard the train Georg stowed away on). And Paula Beer, a popular actress in French cinema, is resonant as the aimless Marie… especially in the more sobering moments, such as a scene in which she confesses her estrangement from her husband, whom she no longer loves but is the only one providing a ticket for her escape.

That Petzold is seemingly so confident, so driven, to deal with difficult moral complexities like this on a consistent basis is a testament to his intuitive nature. Among the eight films he has thus far made, three of them – this, “Phoenix” and “Barbara” – show a meticulous obsession with the difficulties of emotional attachments in times of oppressive governments or ideologies. They are not dramas about black-and-white matters, but deep meditations on people who do or say things that otherwise seem contrary to their instinct. Instead of framing an unfavorable critique in those behaviors, Petzold wants to understand them. Can we hold any person accountable, after all, who may be acting on problematic decisions when the world they belong to has narrowed their perceptions? Can they be reasoned with, or otherwise forgiven, if the means of the matter lead to more suitable outcomes for the fragile emotions of others? “Transit” is a phenomenal embodiment of its material, a picture that deals with all the arduous possibilities without constricting them to cheap or melodramatic resolutions. Life, the movie argues, is too hard to dismiss a mere noble intention.