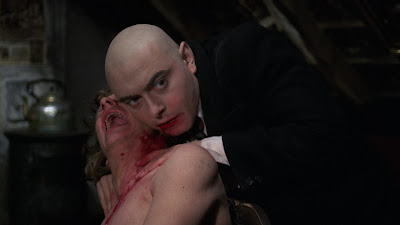 A few are, in fact, suspicious – particularly his downstairs neighbors, who routinely watch young boys arrive with him and then never see them leave (in one scene, a woman scares one off in hopes of sparing him an uncertain fate). This dictates that by routine movie standards, the villain must eventually be caught and answer for the crimes he is committing. But up to that point “Tenderness of the Wolves” involves us in what can only be described as celebratory voyeurism, as if the man holding the camera is observing this all with a degree of misplaced humor. Are the filmmakers so removed from the horror of the events that they must approach it from ironic distance? What of Kurt Raab, the writer and actor portraying Fritz, who plays the role as if he were some sort of Shakespearean antihero? This is not a movie we can reach certainty with because no one involved is working towards the same conclusive argument.

That is not to say that a more laidback approach would be irrelevant. I am reminded of “American Psycho,” a graphic satire about a successful businessman who assaults and murders a plethora of people while remaining undetected among ambivalent acquaintances. The conventional wisdom argues that a story with fictionalized events is easier to pass through the sardonic filters because they have no clout of realism weighing them down, but that’s a short-sighted discussion point. Murder is murder. A movie that far adrift from the sobering terror works because it highlights the desensitized nature of the audience in counterpoint. Might that have been a correct approach for Ulli Lommel, a man who learned much of his skill from Rainer Werner Fassbinder? It’s hard to say. The movie carries the same sharp edge as, say, “The Marriage of Maria Braun” or “In a Year of 13 Moons,” where the characters are, too, allowed to roam free in a logic loop that accepts pain and suffering as everyday certainties. Perhaps it’s not hard to assume, or accept, the idea Fritz’ world of sins consisting of jovial players who celebrate him rather than recoil from suspicions. But the movie, in its purest form, does not offer a fair insight. It plays up the allure and nothing of the mayhem. The movie’s great curse may be in the title: to assume the gentle strides of a beast, they choose to ignore the fangs bearing down on them.

The Haarmann legend is notorious among criminologists: over the course of several years in post-World War I Germany, dozens of young boys (many of them runaways) vanished into thin air around the city of Hannover, with no clue as to who or what was responsible. Then, almost accidentally, a shocking discovery: a man who functioned as a police informant had been luring them to his apartment, sexually assaulting them and then tearing their throats open with his teeth – an act that would ultimately stifle the opportunity to let out a horrifying scream. Then, their remains were dispersed in equally horrifying ways: limbs would be thrown into the nearby river, and other parts were harvested and sold as food for neighbors and restaurants, filled with people who were clueless as to where the protein came from. That his terrible crimes went on for so long is unthinkable today, in a time when forensic science has so thoroughly advances, but the turn of the century symbolized a glaring dissonance between the perceptive nature of detectives and the more evolved instincts of serial murders: they were advancing their skill and technique much faster than their pursuers could adapt to.

One of the film’s jumping off points underscores the typical attitude among Germans of the time: that a man could be a great monster and go unnoticed if he was persuasive enough, especially given the aftermath of Hitler. The movie argues this point, at least, convincingly. In performance, Raab has persuasion and charisma with others, and a good understanding of how to meld two opposing sides of a persona. Notice, for instance, how he interacts with a gathering of friends at a dinner table, and each of them exchange lighthearted banter that turns dark. There is a moment of awkwardness between he and another, but it fades rapidly; this Fritz is a sweet and good-natured man, and certainly means nothing by any of his foreboding implications. Meanwhile, a pair of detectives analyze the growing amount of evidence that seems to be washing ashore from the nearby riverbanks – including soggy clothes, bones and human skulls. Could these belong to the same boys reported missing by relatives? Who is responsible? Their unlikely partnership with Fritz, a former criminal who now provides information to them, is a blinder that keeps them from thinking too deeply about possibilities. In a different state of being, the movie could have functioned as a thoughtful parable about these foolish perceptions.

What the movie does not so, at least beyond two brief implicit scenes, is show us what sort of evil the Haarmann character embodied. Briefly, he is seen engaging with teenage men as a means of foreplay, before asking them to join him in his bedroom for various stages of undress. But there’s almost no follow-through or reveal, just an implication of what probably transpired in the quiet space of an upstairs apartment. Is a reveal as necessary? It wouldn’t be if the film had a better understanding of the man behind the mask. Part of what distances us from indulging the story’s approach is our inability to see him as the madman painted by history books. His crimes are so simplified, even reduced. But the truth of the matter is that he was one of the most sadistic of all psychopaths, unrelenting in his bloodlust, and cunning in how he through others off the scent. This only goes so far in a movie that otherwise romanticizes his public persona to the point of sanitization, and by the time the moment comes for authorities to catch up with him, even we could barely believe in their conviction.

Lommel was not exactly a novice with this material. After working as an actor in a handful of German thrillers and even appearing in front of the camera of Russ Meyer, he came to Fassbinder’s troupe in the early 1970s with an understanding of the macabre. His humor, furthermore, suggested he could offer a more savage approach for this idea, a fact that was proven later when he directed “Strangers in Paradise,” one of the more memorable cult films of 80s German cinema. A full viewing of his full-length debut conjures up intriguing questions. What did he see in Fritz Haarmann? Was he really at all interested in telling this story, or was it just a platform to refine his skill as a stylistic conductor? All homicidal maniacs, in some form or another, must leave an impression that validates their notoriety in the minds of the audience. “Tenderness of the Wolves” implies he was nothing more than a misunderstood romantic, and that’s way too coarse a viewpoint to tie this all together.