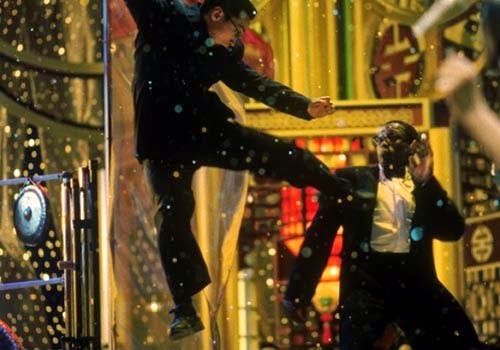 Not that it doesn’t try or anything. The story’s main character is Neil Shaw (Wesley Snipes), a U.N. secret agent under the authority of the Secretary General Douglas Thomas (Donald Sutherland) and assistant Eleanor Hooks (Anne Archer). His current mission is overseeing the ongoing treaty talks between the United States and China, a treaty which shifts priorities drastically when the Chinese Ambassador is assassinated and Shaw is seemingly framed for the crime. With the help of a translator named Julia (Marie Matiko), who apparently witnessed the crime, Shaw dives deeply into the conspiracy in attempt to uncover the secrets behind this unjustified murder.

Give or take a couple of developments, this is basically what “The Art Of War” has to offer narratively speaking. The plot, be it crammed with detail, lacks any sense of direction, and is told in such a reckless manner that it practically derails itself just before things start to pick up again towards the end. There’s no problem in the setup; in fact, for the first 20 minutes, the movie moves along seemingly fine and doesn’t have a flaw in sight. Then it makes the mistake of stressing certain details that should be held back, allowing the viewer to easily guess the mystery and who masterminded it shortly thereafter. Once that happens, the writers get carried away and start throwing pretentious plot developments at the screen like darts, eventually creating a domino effect where the intrigue and the character involvement collapse under an endless series of contrived emergencies, predictable outcomes and unsatisfying increments. The worst part: the production looks so fabulous while all of this mayhem is unfolding.

The cast does well with what they can. Wesley Snipes, who had a similar tone in character with 1998’s “Blade,” moves and reacts like we expect any secret agent would in his situation, even when certain sporadic decisions (such as parachuting off of a high-rise into a large city crowd) seem dimwitted and pointless. Matiko does a fine job with her character as well, aiding Shaw in serious situations but reeling back in time to keep others questioning the extents of her services. The other characters are not as important as these two (at least for a good portion of the film), but round out the cast with solid performances nonetheless, helping to ease the agony of watching the plot’s potential go up in smoke.

The film’s director is Christian Duguay, who also did “Screamers,” and he is a man who knows the style and look of his picture right from the start, even if some of the technical aspects are borrowed from better pictures (one shot, for instance, is echoed almost precisely from David Fincher’s “Seven”). But he’s working with a plot that doesn’t do his visuals justice, and even though they clearly survive by themselves, they just aren’t enough to warrant a solid recommendation here. “The Art Of War” is a more prominent member of the espionage crop of movies, but all the same, fails to equate its interiors with its exteriors.