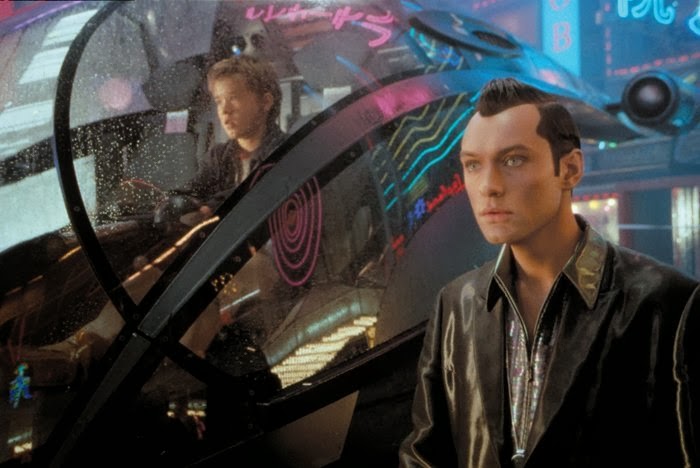 The backhistory of "A.I." is a movie in itself. When the film began production, Speilberg was working with a rough outlineleft behind by the late Stanley Kubrick, who intended to follow "Eyes Wide Shut" with it but died before the opportunity came (a conflicting source says that he simply gave up with the material, but if the truth be known, Kubrick suggested it to Spielberg in 1994, and then reclaimed it when the first offer was declined). So how is it that Speilberg wound up reclaiming the groundwork? Because the two directors discussed it in arm’s length over the years, Kubrick’s family personally appealed to Spielberg, citing him as the only one who could do the vision justice.

With "A.I." at his disposal, Spielberg does a little "give and take" as far as vision goes, opting to utilize the best qualities of both his and Stanley's stylistic talents. The story is set at the peak of imagination, in a future evolved enough to create and manufacture machines that look like human beings. It also gives them the opportunity to project realistic emotions. Of course, therein lies the problem suggested in the movie's promotional line –"What responsibility does a human have to a robot that genuinely loves?" –and in a universe built on bright neon hues and harsh behaviors, there really is no possible answer. Some embrace the machines as ordinary humans, but others mull over the impossibility of machines having human feelings, usually in rather harsh increments.

Though it is easy to separate what is real from what is artificial, most of us tend to manipulate ourselves into believing that machines and/or objects of any kind can actually learn to love, or that we can learn to love them back, for the sake of a good story. This is the crucial point for the viewer as he/she is asked to attatch their feelings onto a young boy whose views may or may not be manufactured by programming. I hesitated on my intial response, but remembering that I once invested my emotions in a wooden puppet in "Pinnochio," the spell is cast naturally.

The movie opens with a scientist (William Hurt) approaching a company specializing in creating "mechas" (machines that look like humans), and he suggests bringing their products closer to actual humanity – that is, programming them to learn and feel rather than think. Years of development pass, and the product is David (Haley Joel Osment), a young adolescent robot with charming eyes and a captivating smile that captures the attention of Henry (Sam Robards), a father mourning the loss of his own son. Henry purchases David and takes him home to his emotionally-ailing wife Monica (Frances O'Connor), who is angered at the idea of investing her care into something that is only wires and computer chips on the inside. But as the movie progresses, she and David begin to bond, like a mother and child meeting after a long separation. The involvement becomes too much for Monica, however, and in an act of panic she abandons him to an outside world of uncertainties. Not understanding why so few humans are willing to accept him (much less his own "mother"), David goes in search of identity, meeting Gigolo Joe (Jude Law) along the way, a machine who is programmed to love in a much different way, and at a price.

The screenplay was inspired by a short story called "Super-Toys Last All Summer Long," although the source material was probably spurred itself by the story of "Pinocchio" (especially given its frequent references to the wooden puppet and his magical Blue Fairy). As a narrative, the script is incredibly generous to its viewers, providing them details about characters, situations and conflicts that are generous in the way they inform this strange world. However, there comes a point when our involvement is held back by unfaithful convictions of a few of the film's most important scenes.

There is the moment, for instance, when Monica’s abandonement of David is underplayed by the notion that he poses a danger to her own flesh and blood son, who has recently awoken from a coma. Scenes like these could have used extended investigations, but are sadly deserted before the emotional appeal reaches too deeply. How do the parents feel about leaving behind David, really? What provokes the correct connection between the young robot and Joe, besides the fact that they are machines programmed to feel? Spielberg assumes we can reach our own conclusions without those scenes, but the contemplation that comes as a result painfully detracts us from our emotional attatchment. In a movie this delecate, instinct is not the kind of talent we should be using.

The look of the picture is magnificent, particularly when David enters Rouge City, a vast metropolis that radiates in dazzling fluorescent colors. All the visual Spielberg traits are apparent (including an obvious homage to "Close Encounters of the Third Kind" during the resolution), and yet the essence of the atmosphere, in which the world feels empty despite the prescence of crowded extras, is clearly inspired by Kubrick’s own sensibilities. In the eyes of the late director, "A.I." would probably have been more menacing, more sexual, and surely more violent than anything his peer might have been willing to do. But as it stands this vision pulls back on the mechanics and finds humanity among the tonal uncertanties. Hardly a kids movie and more of a deep psychological investigation, here is the ideal summer motion picture: one in which style and substance work hand-in-hand to encourage lengthy discussions amongst its viewers.