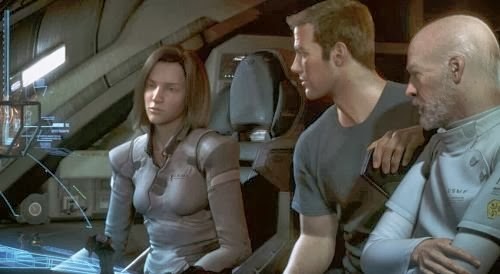 The abrupt arrival of "Final Fantasy: The Spirits Within," however, proves that the film industry is getting a little closer, day by day, to achieving that goal. The movie is the first of its kind: a completely CGI-rendered product designed to look as close to realistic as possible, obviously intended to stimulate appeal in moviegoers to the potential benefits of computer-generated productions. And while the visual evidence indicates that there may be a bright future for this style of filmmaking, it still does not come close to matching the authenticity of living, breathing screen material. Unless there's a major breakthrough in special effects in the future, chances are this is the best that filmmakers can do with the idea.

But in any case, "Final Fantasy" works extremely well, not just because it takes the risk, but also because it has the visionary scope of "2001: A Space Odyssey," and a story so smart and compelling that it had me grinding my teeth. It is loosely based on the game series "Final Fantasy," but since I am unfamiliar with them, I can make no fair judgment calls on how true the picture stays to its source material. As the movie opens, we meet Aki Ross (Ming-Na Wen), a doctor who scours the surface of the planet, searching for remains of planet life not yet destroyed by a catastrophic alien invasion that crippled civilization years before. The Earth in her vicinity is one of ruins and decay, littered by a race of plasma-like aliens dubbed the "Phantoms" who move over the planet's surface in rage and confusion, consuming any living organisms that cross their path (though the filmmakers haven't said, the Phantoms share a great deal in common with both the race of alien Drej found in "Titan A.E." and the creatures in "The Abyss"). Only scattered human outposts hidden behind energy shields remain on the surface--the bright blue skies, the green forests, the sound of birds and the rush of wind are mere memories. Heck, even large cities like New York and Los Angeles have collapsed.

Ross' search is not some naive impulse to try and hold onto memories of a better life; it's actually a necessity in conquering the enemy. With theories constantly scraping into conversation amongst the surviving humans that the Earth itself is a living spirit called Gaia, Ross believes that collecting eight natural life forms (or "spirit essences") from the disaster will be the solution to their dilemma--the conquering force behind the Phantoms. Humanity, however, cannot live under mere the assumptions of something that has not been proven, and General Hein (James Woods) proposes to take immediate action on the aliens by using a powerful space weapon to attack the core of the problem—the Phantoms' vessel, a meteor carrying them that collided with Earth and unleashed their fury. But if Gaia really does exist, as the wise Dr. Sid (Donald Sutherland) points out, the military's attack plan will not only halt the existence of the aliens, but maybe that of the Earth spirit itself. Without one, what future does humanity have, if any at all?

The script by Jeff Vintar and Al Reinert is, contrary to what my colleagues might say, an astounding piece of work that juggles a situation from every logical angle, never overwhelming itself to the point of leaving us confused. The setup itself gets off to a rocky start (trying too hard to introduce its important characters in the midst of a complex situation), but the resolving twists that follow make up for any displeasure. I was particularly fond of how the plot, at a few points, sympathizes with the aliens dominating Earth by humanizing their present situation (one of which I won't reveal in this review, though, since it plays an important part in the resolution), and I also admired how, for once, the writers didn't allow brooding romantic interludes to interfere with the narrative (as they tend to do in science fiction). Given the fact that the picture utilizes such a revolutionary technique, other scribes might not have cared as much about the plot as these two people do. Bless the studio not just for taking a chance with digital, but for also allowing us to bear witness to a fascinating story as well.

But in many ways, it's the digitally-rendered animation that dominates the screen more, and understandably so. Director Hironobu Sakaguchi doesn't treat the visuals like they are even animated--his camera moves with the same conviction and purpose of any sci-fi live action feature. That, naturally, adds to the realism of the picture, which is necessary often since, after all, it's easy to tell that none of these characters are flesh and blood people.

But by the end, does it matter that "Final Fantasy" falls short of successfully capturing the essence of living actors? Not really. This new style of filmmaking undoubtedly has a bright future ahead of itself, although I see it being successfully marketed as a realistic style of animation rather than a replacement for live action as the prime cinematic medium. Someday technology may bring us closer to that task, but I seriously doubt that any respectable audience would accept losing real humans to computer-generated personalities.