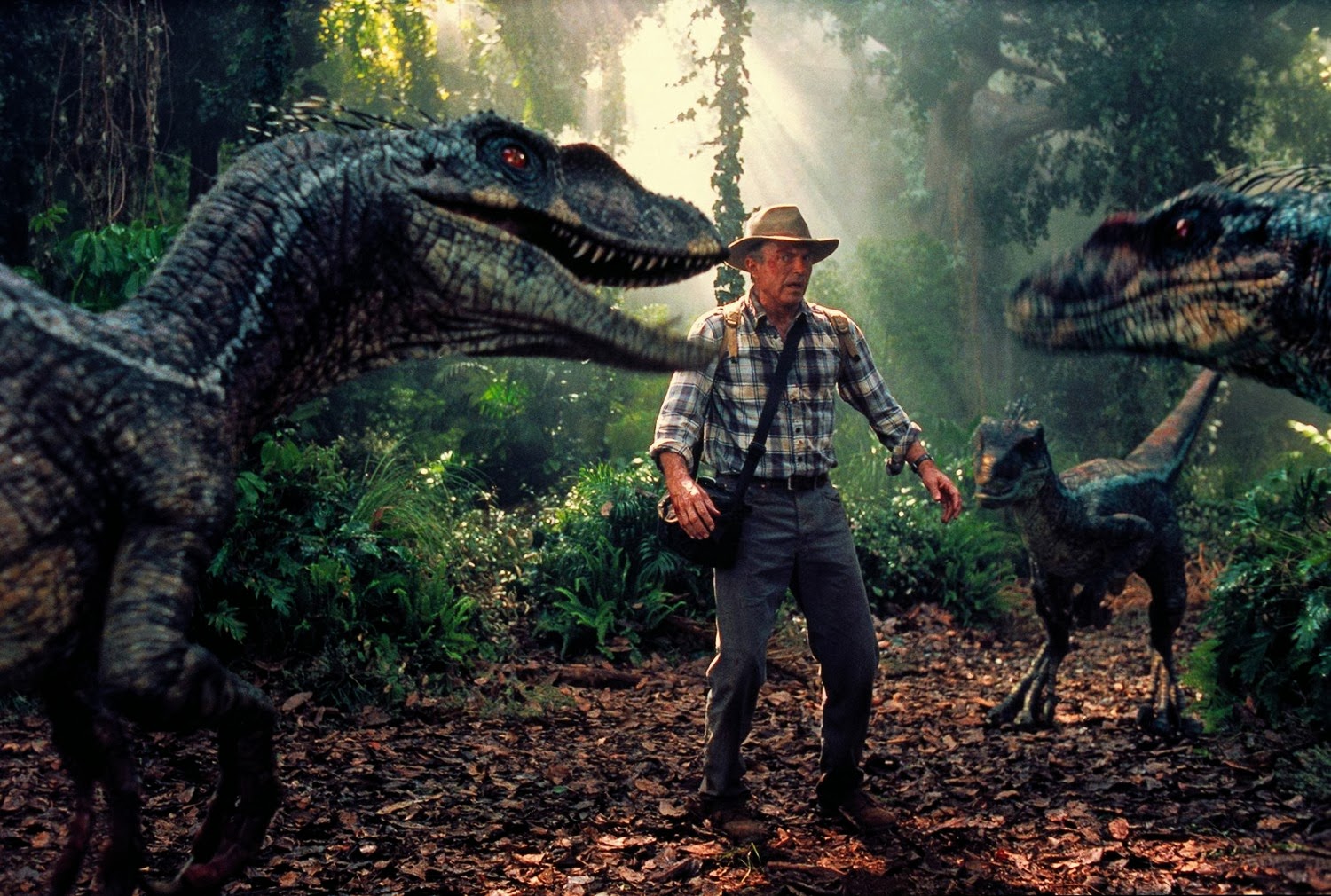 The movie reconnects the character of Dr. Alan Grant (Sam Neil) to the unfolding saga of the living dinosaurs. At the opening of the movie, Grant is lecturing the public regarding his theories that the engineered Velociraptors--arguably the centerpiece of the first movies--are more intelligent than simple paleontology could have ever discovered. He describes their methods of communicating between each other, and even remarks that, without the catastrophic events that killed the dinosaurs millions of years ago, they could have easily became the dominant species of Earth, wiping out humans before they themselves ever had a chance to evolve and combat them. The crowd is not convinced, but it's Grant that is, and such is the reason why he is so hesitant to go anywhere near the two dinosaur-infested islands that InGen so unwisely created just a few short years ago.

Unfortunately, that's just when he is propositioned by Paul Kirby (William H. Macy, an adventurous businessman who, along with his wife Amanda (Téa Leoni), are planning to fly over Isla Sorna (the site in "The Lost World," not to be confused with the one in the original picture) and see for themselves how science has recreated the past. They want Grant to be their guide, but it takes a check with big numbers written on it to convince him. There's just one reservation: they can't land the plain on the island itself. Needless to say, Grant has no say so in the matter.

As it turns out, Paul and Amanda have divorced, and their young son Eric is stranded on the island somewhere (we see how he gets there in the movie's prologue), waiting to be rescued. Armed with little defense equipment, their wits, and the remains of their newly-destroyed air transportation, the two Kirbys, Grant and his young pupil, Billy (Alessandro Nivola), descend into the treacherous forests of Jurassic Park, finding there terrors that they could had never imagined.

Advanced warning has taught us to anticipate the arrival of any new "Jurassic Park" film--it automatically means new dinosaurs. From its arsenal, "JP3" offers up a delicious supply of creatures for us to gaze at: some old, some recreated, some totally new, and others completely unexpected. The movie's prime visual treat is the Spinosaurus, a carnivorous and intelligent creature that has a fin-like growth on its back, and is so fast that it can snap the neck of a T-Rex like a twig. Keeping with tradition addition, the Velociraptors are even more stunning than before, fast and foreboding, with intelligence so realistic on screen that you'd easily mistake them as the real thing. But one of the most notable products of the movie's special effects are the flying dinosaurs, whom were used merely as a teaser at the end of "The Lost World," and now occupy a good chunk of this movie. The complexity behind their movements and actions is uncanny; no doubt Stan Winston struggled with them on numerous occasions.

The director is Joe Johnston, an impresario for nonstop action, who has, among other things, "Jumanji" and "October Sky" on his list of achievements. With "JP3," he adds a sense of fearlessness and risk to the inane atmosphere, something that the series' original director, Steven Spielberg, never did. Aside from the sense of tension he successfully builds as the humans confront their prehistoric enemies, one of his most effective (but audacious) stunts lies in the movies closure, which is abrupt and unexpected, but wisely leaves the door open for a fourth "Jurassic Park" film (an idea, not surprisingly, Spielberg is already considering).

How does this picture rank compared to its predecessors, though? Dead even, I'd say. On a scientific level, the original "Jurassic Park" picture is still the best of the series; on a production scale, it's "The Lost World." But when it comes to packaging in thrills and chills, this is by far the most balanced, most entertaining and most audacious picture of the series.