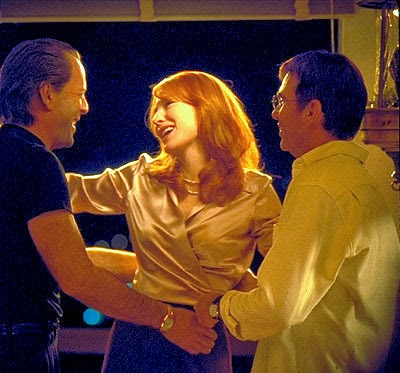 The question is, why do the movies use this detail so incessantly? Perhaps because audiences can, in ways, identify with the crooks they're watching on screen. Portrayed correctly, the thieves aren't simply robbing banks or stealing items—they're taking back what has already been stolen from them. It's a little detail that has existed as far back as the story of Robin Hood, and one that continues to play out even in today's movies. The principle difference between "Bandits" and many of its relatives, however, is that most films lack the sense of a necessary rebellious nature, whereas this film is courageous, delightful, and endlessly funny. And if you look closely enough, you'll see exactly why crime capers have worked so well as movies in the past.

The movie is the product of solid direction, great storytelling, flawless acting and on-the-mark humor, crafted so effectively and concisely that, yes, it probably succeeds "Shrek" as the best comedy of the year. Whereas most crime capers of this caliber would simply fall back on clichés, however, here is a movie that also takes standard elements and manages to display them in fresh, invigorating ways. The obligatory love story and surprise ending are here, yes, but the method in which they are conveyed leaves us surprised and pleased.

"Bandits" sees Bruce Willis and Billy Bob Thornton in familiar roles: the former as a rugged, headstrong and intellectual individual, the latter more sweet (and yet more mentally limited) in comparison. Willis is Joe, a prison inmate in need of anger management who escapes from prison in a cement truck, and Thornton is Terry, a hypochondriac who, in a moment of confusion, decides to tag along for the ride. After cleverly slipping past opposition and breaking free from the penitentiary (much to the alert of thousands of law officials who desperately shoot a few thousand rounds of ammunition at them), the men begin a long and perilous journey in an effort to retain their freedom.

They drive off of roads, change automobiles, and eventually stow away in a house occupied only by clueless teenagers. The point? They need time to concoct a solid plan to stay out of jail, which (not surprisingly) consists of decisions that aren't likely to get them in good graces with law enforcement. Hiding behind several wacky disguises that feel lifted out of a Quentin Tarrantino script, Joe and Terry eventually turn to bank robbery to support their almost nonexistent assets. Early on, the movie even displays how it is possible to rob a bank filled with customers while you're unarmed. The style in which these events are presented make a great case in argument for why bank robbery is such a popular crime in society; as our unlikely heroes take us through the process step-by-step, we see that, if one knows exactly what they're doing, the action really isn't as difficult as it seems.

It is ultimately the desire of Joe and Terry to lead a wealthy and strongly-established life south of the United States border, and to help them in their quest (not to mention their bank robbery schemes), they acquire the assistance of Harvey (Troy Garity), a gullible stunt man who is constantly at work in perfecting methods of how to convincingly die in front of a camera. Serving as the driver for the getaway car for the two "Sleepover Bandits" (a title which they earn after coming up with a more efficient method of robbing banks), Harvey is both an asset and a savior in his given position, even though the men he is working for don't always give him the credit he deserves.

But it's shortly after one particular robbery in which the seemingly simple plan becomes even more complicated. As Terry is walking across the road looking for a quick getaway from nearby cops, he is struck by the car of a depressed housewife name Kate (Cate Blanchett). When he regains consciousness, she is driving him to a hospital, an action which he responds to by waving his gun at her and insisting she pull over to let him out. But Kate doesn't have a frightened response to him; in fact, she is rather annoyed by it. Her unwillingness to cooperate with his request takes her directly to the cabin in which the bandits are hiding out, thus immersing her in their illegal plots so deeply that, as a result, she eventually falls in love with both Joe and Terry. Needless to say, they do the same.

In terms of value, "Bandits" is a vast improvement from the material we've had to sit through during the year's early months, a time when movies like "Blow" and "Hannibal" were the only worthwhile things playing at the local cinema. The script by Harley Peyton is precise and on target, utilizing every moment of the 120-minute running time without a shred of boredom, and the actors know how to effectively convey their roles without seeming like overachievers. Thornton is particularly solid as Terry (especially during moments which require physical comedy), and Blanchett gives us yet another reason to be proud as Kate, the loud, lonely wife of some sort of executive official whose makeup looks as if it had been applied with a butter knife.

It has been said that autumn is when the gears of Hollywood shift into a more positive direction, providing us with the kind of material that screams "Oscar!" "Bandits" lives up to that potential and promises even greater things ahead.