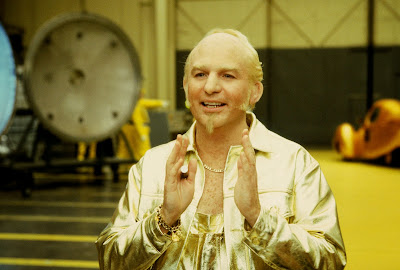 In that grand tradition, "Goldmember" brings the "Austin Powers" franchise to exactly where it should be: at the heart of spirited comedy, in which everything happens as it should and results in spontaneous but enormous chuckles. This was a major issue with the previous film in the series, alas; in "The Spy Who Shagged Me," every punchline, one-liner and sight gag felt so calculated and obvious that the jokes themselves were never really funny (despite being intensely gross). This film keeps bad taste in check for a good portion of its delivery, and though there is an occasion when a wisecrack results in dead stares rather than laughs, the result is pleasing enough for die-hard fans of this ambitious spy trilogy.

When we last left our colorful characters, Austin was enjoying life with Felicity Shagwell and Dr. Evil was trapped somewhere deep in space. When "Goldmember" opens, all those occurrences have already played out; Austin has moved on to be a consultant for Steven Spielberg during the making of a film about his life (titled "Austinpussy"), and Evil has since returned to Earth to hatch new plans of taking over the world and destroying Mr. Powers in the process. This time around, the mad scientist (or whatever he is supposed to be) is plotting to take over the world utilizing the mysterious Goldmember, an eccentric mastermind from the year 1975 whose genitals are kind of like the hand of Midas (hence the film's sly title).

He and Evil's plot involves pulling a large asteroid into Earth's orbit via a contraption called "Preparation H" and having it melt the polar ice caps, thus raising the sea level until the planet is completely flooded. Austin has no knowledge of this situation, however, until his own father, Nigel Powers (Michael Caine) is kidnapped by the opposition as part of their master scheme, and he goes in search of his dad. The conflict: Nigel and his son have never really gotten along; in fact, during the movie's opening act, Austin is humiliated when he is knighted by the queen and his dad never shows up.

When he travels back in time to pursue Goldmember, Austin bumps into his old flame Foxxy Cleopatra (Beyoncé Knowles of the R&B group Destiny's Child), a smart and sexy vixen who is a singer at Goldmember's popular disco club Studio 69. With her reluctant offer to help him in his crusades, Austin prepares to unravel the newest plans of his arch-nemesis before, once again, the planet is left at the mercy of an insane doctor.

If this is all basic knowledge to you, then don't worry; the "Austin Powers" series has never been really big on storytelling. What it is mostly about, as it has always been, is watching Mike Meyers handle so many different roles successfully in one single motion picture. Not only does he reprise Austin as well as Dr. Evil and Fat Bastard, he also takes credit for the new Goldmember character, whose eccentricities are so bizarre and sick that even Tom Green would cringe at the sight of them. Meyers has been one of the most talented screen comedians of his time, and his energetic work here further proves that few in his league are able to pull off so much so successfully. His costars, meanwhile, have fun with their roles as well; Caine is amusing as the father with more in common with his son than he lets on to, and Knowles is fetching as the latest series sexpot, which is her first major film role to date.

Naturally, the movie isn't without its faults, either. Despite the strong arsenal of wisecracks for the audience to endure, the film does tend to get a little hokey at times, especially when it tries to take itself a little too seriously (such as the scenes in which Austin and Nigel argue about the bad things they did to each other in the past, or when Dr. Evil recollects how he was the only survivor in a car explosion and was raised by evil adoptive parents). The dialogue furthermore is pretty inane, and the trivial storyline, despite being brief enough to carry the 90-minute picture, is so familiar that we can practically predict what happens next in every frame. But when you are able to get past those minor inconveniences, "Goldmember" is quite an effective comedy. The first film in the series is still the most watchable and distinctive, but compared to the insipid sequel, this one is the next best thing.