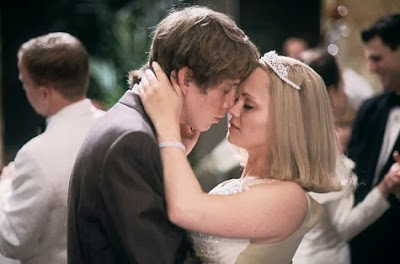 It's a mystery how the movie could be released in this condition. "Pumpkin" is a nasty, smug, shameless and implausible mess that infuriated me in nearly every way possible. Not only does it relinquish coherence and logic, it also has no clue about what it takes to be a genuine or respectable human being. Every ounce of energy that is conveyed by the talented cast is in vein;they are quickly and unfairly abandoned in a minefield of conflicting ideas and statements, lacking the necessary intelligence to help them navigate their way out of the chaos.

The film's star victim is Christina Ricci, an amazing young actress who, with "The Opposite of Sex," "Buffalo 66" and "Sleepy Hollow," broke free from the restraints enforced by being a child movie star in Hollywood. She plays Carolyn McDuffy, a pretty sorority sister of the Alpha Omega Pi house, who along with her fellow sisters are trying to come up with ways of beating their competitors, the Tri-Omegas, for the coveted prize of Sorority of the Year at Southern California State University. In Carolyn's cheery world, everything is in perfect balance—her family, her friends, her popularity, and her boyfriend—until the house decides to compete against their rivals by training mentally challenged teens to compete in an upcoming special Olympics. The problem she has with this proposed undertaking isn't exactly clear, however; at one point, she and one of her sisters challenge the questionable motives behind the sorority's undertaking, and later during the actual training, she runs away screaming like a banshee, upset that her challenged athlete is even looking at her.

The athlete in question, incidentally, is where "Pumpkin" gets its title; it's the offbeat name assigned to a quiet, wheelchair-bound teen boy (Hank Harris), who as we learn through scenes at home, lives a sheltered life with a mother who still treats him like a 5-year-old. Pumpkin has a lot more potential than most give him credit for, however, and when he makes the connection with Carolyn, a deep desire to prove his talent to the world is greatly spurred. But Carolyn's attempts to remain distant from the situation is the premise's immediate conflict; she fears being part of the life of someone who is less than perfect just because it might jolt her out of her own plastic reality.

For the first half hour, "Pumpkin" appears to be going somewhere with its material, relying on wit and irony to convey itself in a true satirical manner. But as we begin to peel back the layers behind the players that drive the screenplay, we realize just how empty everything is. Not one person on screen is even remotely sympathetic or believable, with the sole exception being Pumpkin himself who, despite his mental limitations, is quite possibly the most intelligent person within the picture. Carolyn enters the scenario as a poster child for cheerleader-type naivety, and yet when her world is turned topsy-turvy by her mentally challenged athlete, her views of life and people seem to change almost instantaneously, despite being just as transparent and detestable as they were beforehand. Pumpkin's mother Judy (Brenda Blethyn), meanwhile, is always convinced she is doing what's right for her son's safety, although when the chips are down, she's more motivated by her reputation rather than the well-being of her son.

The movie's most unforgivable flaw is the contrived tone that the screenplay incessantly tries to force-feed the audience. Consider a scene when Carolyn's boyfriend Kent (Sam Ball) takes off speeding down a highway after being dumped by his girlfriend and being punched by a defensive Pumpkin. Kent is frustrated and angered to the point of tears, and he pounds on the gas petal like there's no tomorrow. In the blink of an eye, he misses the road and his car goes off a cliff, exploding in midair as if the gas line has been broken by impact with the cliffside (although the vehicle never tumbles on rocks during its free-fall). The next morning, Carolyn is summoned to the hospital, where Kent is lying in a bed, paralyzed from the waste down but without so much as a slight burn mark in sight. "Now I'm handicapped like Pumpkin," he says to his former love. Gee, and here we thought you were disabled before!

When you multiply this scenario by eight or nine, what you get is the entire final act of "Pumpkin," which is simply a series of useless, boring and pathetically executed false endings that never seem to end when they should. So relentless and disheartening are these scenes that when the actual conclusion is in fact upon us, we don't truly believe it until the credits finish rolling and the projector shuts off.

I suppose there is an underlying meaning behind the crazy shenanigans of this ho-hum endeavor, but even if I began to understand them, it's unlikely that I'd be any less frustrated with this travesty. Satire may be one of the few genres that can successfully stretch into bizarre yet flamboyant territory, but what's the point of trying if the only person we feel a connection toward hardly says a word during the whole two-hour ordeal?

Comedy/Drama (US); Rated R for language and a scene of sexuality; Running Time - 118 Minutes