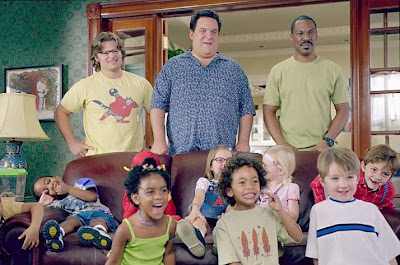 Ask the average man about raising a child, and chances are he will redirect your inquiries to a woman. If that's the sort of generalization that most of today's male population still happily embrace, then it's unlikely that any of them will find a shred of appeal in "Daddy Day Care," a film in which fathers decide to watch and manage the kids of strangers before realizing how lackluster their parenting skills are with their own youngsters. Indeed, as asked during an important dialogue exchange during the early half of the picture, "are men not capable of taking care of a kid the same way a woman can?" Perhaps so, perhaps not. In either case, the answer is probably too simple to even deserve the focus of an entire movie, especially one containing the likes of Anjelica Houston and Eddie Murphy in front of the camera.

"Daddy Day Care" is a movie about preschoolers, for preschoolers, and probably made by preschoolers. The result is a 93-minute exercise in mediocrity, a flat and misguided work that plays as if all of its ideas are scribbled down in crayon on construction paper rather than actual script pages. There is no stretch to assume that kids can be a source of constant comic delight on any movie screen, but can any film depend primarily on them without the benefit of a narrative? Hardly. Watching the adult actors slog their way through the dreary material, they seem even more bored and frustrated than we do, as if they're simply participating in the exercise because they owe a favor to someone behind the scenes.

The opening setup can almost be predicted rather than described. Murphy plays Charlie Hinton, a big-shot product developer for a local cereal distributor who always has a lovely wife (Regina King) and a cute son to come home to after a hard day's work. After he and his partner Phil (Jeff Garlin) fail in an attempt to convince a panel of children to approve their newest creation, a healthy cereal called Veggie-Os, they are handed their walking papers. The layoff is fine and dandy for Charlie at first... but what is to become of his little boy, who is now enrolled in the high-profile Chapman Academy where tuition costs practically rival most high-profile colleges? Unemployed and unable to find work, he resorts to his only current option—becoming a stay-at-home father, even though he doesn't exactly know how to keep his son amused most of the time. Phil quickly joins in this new adventure, although it's perhaps more hard for him because, well, his kid is still not potty trained, and dear old dad is still not the expert on changing diapers.

Somehow, in some moment of the day when all this is going on, Charlie decides he and Phil need to start up a day care service. As if managing their own kids isn't difficult enough a task, these two decide on impulse that they can manage a house full of them while their wives are away at work. Oh, but how some things are easier said than done, eh? In fact, during the first few days of maintaining this new service, as expected, they're bombarded with so many energetic little tykes that it almost murders them before the first day is over. And yet even after the roster multiplies rapidly over time, they still stick with the program, perhaps only in the beginning to benefit financially from something, eventually realizing that coming to manage a room full of brats does wonders to their own perspectives as parents. By the end, rather conveniently, we're even getting the typical "I finally realized my potential as a father" speech here and there after Daddy Day Care becomes a major success. How obvious, eh?

The movie's villain (or rather, the outline of one) comes in the form of Mrs. Harridan (Huston), the head of Chapman Academy who oversees the studies of all her students and refuses to allow anyone to interfere in tarnishing the school's reputation. When she challenges Daddy Day Care because of its increasing affect on current enrollment, she comes out swinging with both fists, tipping off city inspectors to potential problems with the in-home establishment and sabotaging elements of their community fundraising carnivals in hopes that their efforts will go belly-up. For any villain played by the ravishing Huston, however, these sorts of minuscule behaviors would never qualify meeting the definition of a true antagonist. In fact, her character's more obvious misdeeds—forcing the Academy's young little pupils to study German, prepare for SATs and analyze nursery rhymes through the theories of Freud—are treated here like mere background traits. This is a movie that knows it has to create conflict in order to have a message, but it takes easy roads when it should be going into more thought-provoking areas. Imagine seeing a movie about fathers who try managing a day care center only to realize that the process can, indeed, explain the Mrs. Harridans of the world.

Director Steve Carr and writer Geoff Rodkey are fairly new to this industry—Carr's only notable credits include "Doctor Dolittle" and "Next Friday"—and though they generally come across as unpolished amateurs with their work in "Daddy Day Care," they, at least, don't push for something completely insulting or wretched. In fact, during certain intervals of the film itself, we're actually kind of amused by the implored antics (I giggled hysterically when Charlie, on the first day of Day Care, passed out a professional mission statement to all the kids before realizing that none of them can read, much less care). But what exactly is the target audience here? The movie seems too unbalanced to even be directed at anyone specific. Fathers, yes, may be a potential audience, but what will they learn here that they shouldn't already know about parenting? What can kids, furthermore, possibly hope to derive from the material other than what their parents have already talked to them about? Watching "Daddy Day Care" is like being reminded of a hundred rhetorical questions. The outcome is not joyous or very playful. It's sort of like the routine after-school detention where you twiddle your thumbs waiting for time to pass.