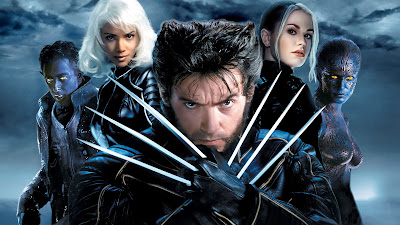 The stories of the X-Men and their intricate adventures in a world with instinctive to fear and hate them have always been a source of constant fascination in the ever-changing comic book market, but even more fascinating has been Hollywood's challenge of filtering that rich 40-year history of the series into a collection of two-hour action films aimed squarely at casual moviegoers. For those of us more familiar with the material than, say, the average theater attendee, the questions often outweigh the anticipation: who, for instance, decides what plots get covered in these endeavors? Who decides what characters to include and how to introduce them? Who or what doesn't quite make the cut? The answers maybe simple, but the brains behind Twentieth Century Fox's inevitably-ongoing franchise aren't immediately thinking about the cravings of hardcore series purists. No, these movie mutants are not a homage to those comic buffs who have waited patiently for years to see these plots and players make the leap to the big screen; they are colorful summer blockbusters designed to appeal to an audience that doesn't expect to know a thing about the source material.

There is, of course, nothing wrong with that prospect. Little is worse than being required to do thorough homework before going to the multiplex, but when it involves a release considerably more focused on high-octane thrills and excitement, it also undermines the potential for a payoff. In most regards, that kind of logic was the key to success with the first "X-Men" feature, a fresh, clever and well-packaged effort that may have been skimpy on its linkage to a popular comic universe, but ultimately delivered the goods. Now comes "X2: X-Men United," a sequel that, like its predecessor, exists solely on its own merit and effectively establishes a premise without requiring viewers to be experts or banks of knowledge prior to the opening frame.

Why, then, does the movie fail to live up to the hype that has circled the project over the recent weeks? Because the writers, believe it or not, seem to have gotten themselves lost in the plot. Unlike the opening chapter to the series, which was character-heavy but had enough action to compliment their narrative thrust, "X2" is a film obsessed with setup, clawing its way through scenes of buildup, foreshadowing, heated dialogue exchanges and odd confrontations without actually knowing where to go with anything in the end. In a twist that literally contradicts the whole purpose of it being released at the start of a summer box office blowout, the picture doesn't even have a genuine mind for action, imploring it as if it were merely an afterthought in the heads of the filmmakers. No, this isn't the enjoyable and smart adventure that the original "X-Men" was; this is what you call a "filler" chapter, designed to extend the life of the subject long enough for the writers to come up with better scenarios for future entries into the franchise.

During the first few minutes, at least, all signs point towards something much greater. Via a swiftly-edited and precisely-crafted cat-and-mouse game within the walls of the U.S. Capitol, the movie introduces the audience to Kurt Wagner (Alan Cumming), better known to most as the Nightcrawler, a mutant with blue skin, piercing cat-like eyes, sharpened teeth and a tail that acts like it has a mind of its own. The German mutant, a generally shy and sweet person in the source material, appears here without regard to consequence or gravity, as he ambitiously maneuvers his way through hallways and hordes of officers in his attempt to find—and assassinate—the country's commander-in-chief. He doesn't succeed, of course, but the fact that he even tried is reason enough for Charles Xavier (Patrick Stewart), the leader of a prominent school for mutants, to seek him out and get to the bottom of his odd behavior.

Meanwhile, back at that school, Logan (Hugh Jackman), a.k.a. Wolverine, returns from an ill-fated trip to discover more about his hidden past. He is instructed to watch over the "kids" of the school while the others are off on their own assignments, but the first night doesn't even end before the mansion and its inhabitants are invaded by a group of government agents on assignment by the mysterious William Stryker (Brian Cox), a former war general whom Logan thinks is a missing link to his own background. He—and other significant mutants such as Rogue (Anna Paquin) and Bobby Drake, aka Iceman (Shawn Ashmore)—manage to flee the scene before being apprehended, but their safety remains debilitated, especially since those out-and-about senior X-Men can't be contacted so easily.

The narrative structure circles around one specific plot point, which deals with this Stryker character and his veiled government plot to utilize Cerebro, Xavier's personal tool for searching out mutants, in an attempt to wipe out every living person who has taken this unexplainable leap in evolution. The combat involves the mutants we are already familiar with—Xavier's own circle of X-Men as well as former villains Magneto (Ian McKellen) and Mystique (Rebecca Romijn-Stamos)—and a few newbies, namely the aforementioned Nightcrawler, and Pyro (Aaron Stanford), an overly-ambitious kid who can manipulate fire into forces much more destructive. There are also new villains, too, such as Lady Deathstrike (Kelly Hu), a mutant who, like Wolverine, has an adamantium skeleton that allows sharp knives to emerge from the tips of her fingers (although the initial romantic background explored in the comics between her and Logan is pretty much nonexistent in this screen treatment).

So here we have an ensemble that has grown gradually from the foundation of the first "X-Men" movie, but almost no sense of conflict or action to engage any of the characters beyond showing off their astounding physical abilities. The privilege of seeing them exhibiting their powerful behaviors is sometimes there, yes, but the scenes don't seem to be consciously made; they're stagnant and somewhat labored, lacking the spirit and vigor that allow the comic panels to jump to life. Even the more obvious visual workouts, like a scene in which Halle Berry's Storm creates funnel clouds in attempt to distract government jets, aren't fully realized. We don't get the impression that Singer has restricted his visual effects artists in the least—in fact, our minds are far from that notion—but the script they are working with doesn't offer them much opportunity to exercise their creative freedom. The action is always background, and even the scenes that do tend to stick out seem a bit static in the end.

The screenplay's central conflict, furthermore, doesn't even seem to make much sense. If it is to be believed that General Stryker can wipe out the entire mutant race merely by manipulating Xavier's mind to do so, why does he even have to rebuild the Cerebro chamber underground in Alaska? What was the purpose of invading the mansion if they already had it built somewhere else and the professor wasn't even there? The narrative holes are obvious and awkward, and though they don't necessarily destroy the movie, they do little to help us endure the experience beyond keeping us guessing at specific plot intervals. At a lengthy 135-minute running time, the picture feels like it is meandering on and on hopelessly looking for some sort of payoff, which it ultimately doesn't find.

Still, "X2" did not bore me; in fact, once you strip away the fact that the endeavor is mismanaged and lacks essential treasures, it has quite a few decent isolated scenes (I particularly enjoyed the ones where Mystique cleverly sets up an officer so her partner, Magneto, could successfully escape his plastic-bound holding cell). Taking this into account with the fact that the movie leaves us giggling in anticipation following obvious hints about future film storylines, then the movie works to some extent. With the summer crop of motion pictures swiftly approaching, however, it shouldn't be long before this effort is merely a distant memory.