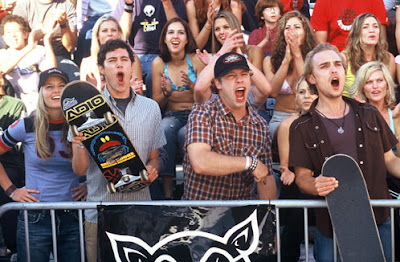 Like any tolerable sports movie, though, "Grind" has a level of distinction that at least keeps the material moving forward. It revolves around Eric Rivers (Mike Vogel), a southern California teen with big dreams of his talent as a skateboarding whiz being discovered by the professionals. He and his two closest friends—the hardworking Dustin (Adam Brody) who has saved up money for college, and the loose wire Matt (Vince Vieluf) who never is able to figure out why women aren't attracted to him—think they have what it takes to get sponsored by the big boys for participating in the professional skateboarding tournaments, but when they arrive to deliver a tape of their performance to one of their biggest idols, reality hits them in the face: they are hardly the first group of aspiring skateboarders to seek out sponsorship, and it's doubtful that anyone would pick their tape out over thousands of submitted others for immediate consideration.

Ah, but as even the biggest heroes in the genre have proven, no one gets anywhere by simply letting the major obstacles distract them. Together, with the vehicular assistance of their town's aging gigolo Sweet Lou (Joey Kern),the three teens inevitably decide to follow the big players through various locales in hopes that they will get noticed—and be allowed to play—in one of the championships. But what are the odds of there being any success in the venture, especially when the troupe is traveling with limited expenses (much to his displeasure, Dustin's rapidly-depleting college fund), and they can't even get past the entry gate unless someone has them put on the list?

The devices of story utilized in "Grind" lead us through an all-too-familiar adventure in which wanna-be professional athletes barely get by before finally persevering in their quest to follow their dreams, but the brief detours the movie takes between these conflicts are actually the product's selling point. Consider the obligatory party sequences, a conflict involving Sweet Lou wooing a skateboarding groupie before she steals his van, and a late twist in which Matt reveals the truth to his friends of why he so despises the sight of clowns. These kinds of scenes, which are scattered in between dry plot moments, often add the touches of color that are generally lacking elsewhere in the picture; while certain ones are bright and silly, others are charming and funny, building on the already-likable chemistry shared between the film's four main stars. The ticket to movies of this nature—particularly those involving large groups of characters—is that you have to admire the individuals before you can even care about their situation, and "Grind" spends a solid amount of time, mostly in moments unrelated to the central plot, establishing their friendships and solidifying their long-existent bonds.

But still, the movie refuses to work. No, not because it dwells on a subject that a good percentage of audience members probably have little to no knowledge of. No, not because it's the kind of movie that isn't afraid to resort to formula whenever it feels like it. The problem with "Grind" is that it's just not very ambitious or interesting in the way of plot; events that carry characters from one point to the next (some of them crucial enough to change the movie's direction) simply roll off the pages of the script without so much as a hint of desire. Observing the calculated differences between the experienced main characters and their uptight competitors on the skateboarding ramps, the essence of the game is revealed in a way that also underscores the efforts of those who made the movie itself—dangerous stunts and tricky maneuvers can get you a lot of oohs and aahs from avid onlookers, but at the end of the day the game doesn't mean anything unless you have put your heart and soul into it.