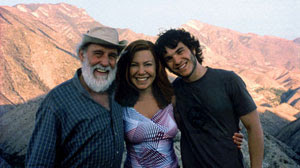 With that kind of candid approach comes "Lucía Lucía," a film from Mexico by famed director Antonio Serrano that examines a woman with an obsessive incentive to overemphasize details in her own complex life. She's a children's novelist played by the endearing Cecilia Roth, a woman with an ordinary exterior whose life is turned topsy-turvy when her husband disappears at the airport right before they are both scheduled to board a plane for vacation. She is worried, confused, and thrown from comfort when he never comes home... and yet none of that really matters to us, because the movie is more concerned with how easy it is to misguide observing eyes with one or two simple charismatic lines of dialogue. Consider two of the most early scenes that are used to set up the premise—in one, Lucía appears as a high-class socialite living in a fancy upstate apartment, and in the next her appearance is plain, an ordinary living condition in the backdrop as she admits, without much regret, that she tends to lie about some things when telling a story before apologizing for it later. If a woman insists on being fanciful with her own life, it's difficult to imagine the story itself being very significant in the first place, right?

The movie is ripe with appealing personas, beings who occupy the celluloid like subjects in one of those old films from a science class about life forms in various stages of growth. At the opening of the film, Lucía, our narrator, is thrown out of the loop following her husband's disappearance, and is then is devastated further when she is told, via a cryptic memo, that he has been kidnapped by an angry group of mercenaries whom he apparently owes a lot of money to. During her rather rigorous effort to pay the ransom and free the man she loves, she meets up—and becomes fast friends—with two men who live in the same apartment building. One, an old military veteran of the Fidel Castro army named Félix (Carlos Álvarez-Novoa) is a father figure with all sorts of great ideas, and the other, an aspiring artist named Adrián (Kuno Becker) is a quoter of famous philosophers who Lucia would consider being romantically interested in if she weren't presently married (or so much older than him). When he insists on making slight advances, in fact, she manages to hold him off simply by offering startling words of wisdom. "You know what it means to be mature?", she asks. "It means you are beginning to rot."

Together, they all descend into this dangerous situation in order to find out the truth behind Lucía's husband's kidnapping (was he really kidnapped, though?), but as is the case with even the most basic films about growth, the focus is never on the actual events leading to the evolution, but the evolution itself. As friends, confidants and assets to each other in a time of ambiguity, the three form bonds, reveal hidden desires and explore the roads of life like anxious tourists compromised by tight schedules. For the men, the journey is more like a spectator sport most of the time, but for Lucía specifically, it is a chance to experience the world in a way she never thought possible to begin with. By the end, in fact, her experience has so overwhelmed her that she actually contemplates whether she even wants her husband back at all, much less save his behind from potential doom.

The three main stars occupy the screen, for the most part, with great charm and energy, but still the movie isn't as rewarding as it should be, either. It is never a problem to revolve a story completely around characterization, but when a script requires it to build based on specific plot circumstances, sometimes it needs a little more in the way of story development to drive it. "Lucía Lucía" tends to lack that kind of necessity, portraying plot elements and story arcs with such vagueness that they seem almost comical when they should be serious instead. There is a late scene, for instance, when the heroes mingle with the unsuspecting villains, and instead of there being any sense of menace around them, the antagonists seem more like bumbling idiots who couldn't possibly be smart enough to manage an elaborate kidnapping plot. This is contradicting to a later scene in which Lucía returns home to find that her enemies have killed her dog as a warning about her interference.

In terms of the movie having rewards, it at least offers more than enough to satisfy the viewer's cravings—characters are dimensional, actors are focused, and chemistry is admittedly strong. I also liked much of the movie's dialogue, which is smart and sometimes very clever without necessarily being too zealous for its own good (during a love scene between Lucía and Adrián, she tells the audience that "Heaven must be a sexual moment frozen in time," and we know exactly how she feels). And yet even with all of this working in the movie's favor, one can't help but wonder how much higher the reward could have been had the screenplay been a little more interested in plot specifics. Lucía reveals a great deal about herself in 110 minutes of self-fulfilling narration, but imagine how much better the experience would have been had the story allowed itself to match that depth.