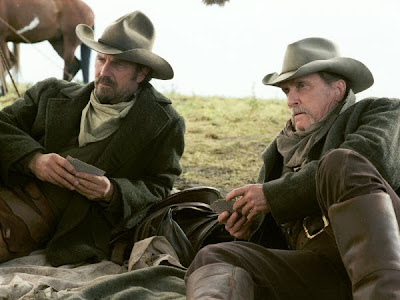 Countless have since tried to revive the movie western, or at least the mere essence of it—most are unsuccessful, others produce tolerable efforts that would otherwise be dismissed in the world of filmmaking. Only on a rare occasion is there someone who can really recapture the vigor that was lost years before. Consider "Unforgiven," arguably the last great film of its kind; directed methodically by Clint Eastwood, the movie knew what it took to overcome the formula and embraced the arduous traits of its greatest precursors: stories with ideas outside the overly-conventional and characters that weren't so much hung up on revenge or saving towns as they were on their own flawed human nature. Eastwood's endeavor wasn't exactly a rebirth for the western, but it did at least seem to close the book on something that never really felt finished after Wayne's death.

What, then, would the Duke say if he knew that Kevin Costner, the same man who made "Waterworld" and the unforgivable "The Postman," decided to make his own descent into that forbidden territory of outlaws and cowboys? Chances are it wouldn't be "best wishes." Not exactly the most favored filmmaker of his time (if not just for the fact that most of his endeavors are shamelessly self-indulgent), Costner's announcement that he would adapt, and then co-star in, Lauran Paine's "The Open Range Men" wasn't exactly cause for celebration, if not just for the fact that the source material pinches at narrative themes that he has been obsessed with ever since "Dance with Wolves" hit the screen. Can a man with a history of over-stretching most ideas and playing on those kinds clichés really have what it takes to create a successful film in this rarely-effective genre?

First thing's first—-Costner's effort in "Open Range" does not produce the kind of result that will benefit the movie western in the long haul. The movie is predictable to a fault, with dead weight in places where it shouldn't be and narrative flaws in areas we least expect them to show up. And yet... the movie still works. Why, though? Because Costner, as a director, is genuinely interested in most of what goes on in front of the screen—the characters, their history, and what spurs their conflicts—and with that motivation he is able to take even the most familiar elements and give them a revitalized—and generally effective—treatment. In the end, there is no denying that his efforts have failed to revive a long-dead concept, but in the meantime he at least offers the kind of thrust that gives off a few observant sparks.

Like every other film in this subtext, "Open Range" opens with its focus on a group of instantly-likable wanderers: Boss Spearman (Robert Duvall), the figurehead of the protagonists whose incessant wit usually upstages his other qualities; Charley Waite (Kevin Costner), the second-in-command who shields a sizable part of his personality off from the world because of bad memories from the Civil War; Button (Diego Luna), a tagalong kid who looks up to his superiors even when they don't treat him fairly; and Mose (Abraham Benrubi), the obligatory unfortunate whose crossing with a local group of thugs seals his—and his partners'—fate early on in the picture. Together, they are what the hardheaded Denton Baxter (Michael Gambon) refers to as "free grazers," men with no specific tie to a home or town who drive cattle from one point to the next for most of their lives. When Mose wanders into Baxter's town, however, he finds himself at the opposite end of an unfair gang-up, which not only results in serious physical injuries but lands him behind bars as well. Charley and Boss show up in town themselves in time to bail their friend out and get him medical attention, but not before they have left a lasting impression on Poole (James Russo), the local sheriff who will make it his duty to see all the free grazers either in jail or in a cemetery.

Sadly (but perhaps not so unluckily) Mose is killed early on in the turf war and Button is seriously injured, leaving only the other two to face off against an infrastructure of determined antagonists. Whereas those in town seem to lack specific reasoning for their vendetta, Charley and Boss are entirely motivated by their thirst for revenge, and understandably so. As a result, the story pulls them out of their familiar landscape and plunges them into a menacing western town not unlike those of the most familiar pictures in the genre—a town loaded with hateful villains, innocent bystanders, victims and supporters on nearly every street corner who will inevitably cross paths with the story's anti-heroes. Probably the most noteworthy of these supporters, at least in terms of characterization, is the sister of the town's all-important medicine man: Sue Barlow (Annette Bening), a kind and lovely woman who supplies the rough and rugged Charley character with a much-needed love interest. The movie isn't necessarily concentrated on the idea of romance (in fact, it feels more like an afterthought most of the time) but Sue gives the story a solid source of light and purity, which becomes necessary when the more harsher tones begin to take over in the film's latter half.

"Open Range"s greatest asset lies in Costner's ability to create incredible tension. Some scenes that would ordinarily pass through the radar without detection are heightened here because they play out without all the flash or glitz expected of them; they are stripped down to the very basics, allowing characters and feelings to drive their direction rather than specific plot twists. Consider a scene when the sheriff crosses paths with the two free grazers in the local saloon, in which he calls them out of the crowd before being harshly warned about his own ill-fated attempts to silence them. The scene is driven by impulse and behavior, not by music or camerawork or even immediate story decisions. By allowing the scene to play out in such a way, Costner surrounds his audience in disrobed realism; it is ambiguous and exciting because we never really know what to expect in the next frame. That kind of approach is replicated even more effectively during a sizable sequence in the final act in which both villains and heroes face-off in a bloody shoot-out. There, characters aren't prominently being motivated by the narrative but by sheer intuition, which results in fateful blunders and moments of surprise which wouldn't ordinarily occupy scenes like this in similar films.

Whereas those kinds of decisions give "Open Range" the quality it needs to survive, others alas prevent it from going above and beyond the bare essentials. Besides the movie's simplistic (and rather bland) approach to a love story, it also fails to establish dimension in the antagonists, particularly Dexter, who spends most of his screen time ranting about free grazers trespassing on his land without actually supplying a specific reason. Duvall, meanwhile, is in a constant tug-of-war with his performance because the script expects him to be both a wise and experienced avenger as well as a source of comedy relief, sometimes at the exact same intervals. And as for Costner? This is a man whose natural talent is behind the camera, not in front; when his Charley persona appears to shield a painful past from those who inquire about it, we don't care about it being revealed because the actor doesn't seem interested in it either.

Still, for a man with more than his fair share of failures, Costner has managed to redeem himself with this interesting and generally solid endeavor in the world of the western. It may not have the Duke's boots to walk in, but "Open Range" covers a lot of ground just fine with its own.