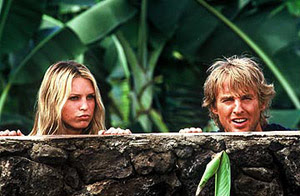 We can't, and many talented individuals have walked blindly into this ill-fated scenario and emerged unvictorious in their attempt to adapt one of the books to the big screen. On a rare occasion, as with Quentin Tarrantino's "Jackie Brown," the undertaking works (although in this case, it is because the director added in his own quirkiness); on the flip side, however, there are rather sub-par efforts like "Out of Sight" and "Get Shorty," which have clear motivation but can't begin to penetrate the fierce bubble that the substance is sealed in. As much as each of those films has to be faulted in one way or another, however, they at least have the distinction of actually trying to do something with their material, whereas George Armitage's new version of "The Big Bounce" starring Owen Wilson and Morgan Freeman is just about the most uninspired effort imaginable in the attempt to garner some kind of success with its source material.

The result is a movie that is hardly worth the time or effort to write this review, a dead zone of monstrous proportions that warrants nothing but yawns and groans for all 89 minutes it takes up the screen. It's a wonder that the people in front of the camera don't fall asleep at some point of the action, as their relevance in the story serves little purpose other than to give the audience a different variety of faces to see, and their dialogue is a shoddy collection of monotone one-liners and words of wisdom that infants could recite in their sleep. To say that the experience of watching the film is awful would not be a fair description; this is the kind of movie that doesn't even have enough enthusiasm to deserve our hatred.

Somewhere amongst all the boring characters and their personal relationships, there exists a story—a paper thin one, yes, but one that still inspired a much better film adaptation in the late 1960s. In this new version, Owen Wilson plays Jack Ryan, a rebel of sorts who is fired from his construction job after assaulting a coworker with a baseball bat and as a result decides to return to his previous profession: manipulating innocent people and pulling off elaborate cons for the betterment of his own wallet. Somewhere amidst all his heists (many of which could probably be accomplished by the most dimwitted of criminals to begin with), he captures the attention of Walter Crewes (Morgan Freeman), the local judge who likes his demeanor enough to offer him a job fixing and maintaining small housing units along a segment of Hawaiian beach. The hook, of course, is that this particular beach just happens to overlook his own former boss's house, a place where his current mistress Nancy (Sara Foster) is staying and enticing anyone she comes into contact. Jack falls for her charms almost immediately after a casual glance, and the two connect in a way that provokes not just romantic interludes, but also discussions about pulling off the ultimate scam on Ray Ritchie (Gary Sinise) before he returns home to reclaim his bed mate.

What ensues as a result of this setup is basically the standard infatuation comedy with elements of con thrown in for good measure, except that this time none of the comedy or charm comes along with it. In fact, the general air around the film is so rank with uninspiration that the movie feels like outtakes rather than a genuine final cut. The pace is so slow that snails could outdistance it, and even though it only lasts 89 minutes, there is seldom an indication that you're enduring something in which an ending is close in sight.

Furthermore, the casting of Owen Wilson insults the very nature of the film's hero—the character is initially viewed as an outwardly-straightforward being with little quirk, but Wilson treats the role in the same manner has most of his previous, in which the primary motive is in having zany physical and verbal reactions to most major plot twists. The obvious mismatch is an unhealthy distraction, even when the movie doesn't have any plot twists to begin with; watching him pursue the screen persona is like watching a surfer trying to make a career with Shakespeare tragedies.

It is doubtful that even the most amateur filmmaker of professional cinema could do much worse than what the director has given us here; after all, at least amateurs are motivated by something in this profession. Watching "The Big Bounce," you get the impression that Armitage and his cast and crew were only participating in the project because they owed favors to someone high up in the chain of command at Warner Bros.; it has that kind of essence that suggests we are dealing with sleepwalkers instead of filmmakers, most of whom might have been involved just for sake of going on a trip to Hawaii during filming. Yes, but at least they're the lucky one—us viewers still had to pay hard-earned money to see this dreck.