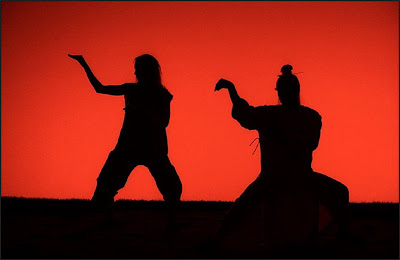 As steep as the achievement seemed, however, it still could not take away from the fact that we only were seeing half of the whole story, and that director Quentin Tarantino's vision consisted of more than just a few brilliant shots of kung-fu stacked up against a premise straight out of an old spaghetti western (both volumes were actually shot with the intention of them being one film, but were later split up by the execs at Miramax because of run time issues). This second volume, however, which could have been less like a new film and more like a big climax to already-established material, is not the kind of conclusion one who have expected to see as the follow-up to the earlier product. Why? Because here Tarantino abandons all of the burning fuel of his first outing and instead concentrates on characters, relationships, dialogue exchanges and essential back story, using the quirky elements of violence only as minor tools to drive along everything else. That may not necessarily make the film better than its predecessor, but it does give it the sense that what we're seeing is something completely different and unrestrained. The result in itself is mind-numbingly brilliant.

When we last left Thurman's Bride, she had just disposed of the second of five victims on her death list: a female Asian crime lord who, four years prior, teamed up with her fellow assassins and caused the massacre of her entire wedding party. Being the lone survivor with a gunshot wound to the head, she quickly fell into a deep coma only to abruptly awake four years later, determined to seek revenge in the form of tracking down all five villains, also former associates, and disposing of them one by one. In "Kill Bill, Vol. 2," three of her opponents remain standing, and slowly but surely they will be eliminated, each causing their own difficulties for the female vigilante before she finally crosses the path of Bill (David Carradine), the mastermind of the operation.

The basic premise of the entire franchise could have easily been described in just a few short sentences, but Tarantino doesn't desire making things easy. Here, interestingly enough, the movie pulls us aside at several intervals and actually gives us full explanations to scenarios that before were only vague setups; for example, we have a scene in which the Bride is tracked down and ultimately betrayed by Bill, the leader of the squad and apparent former boyfriend, and even another in which she realizes that the child she is carrying must result in her giving up a life as an assassin (conveniently, this all happens just as she is in a confrontation with a gun-toting hit-woman sent to kill her first). Meanwhile, other flashbacks, such as one involving the grueling training session with a Cantonese fighting expert played by Gordon Liu, exist more to explain current dilemmas rather than past ones, such as one in which the Bride's next target, Bill's brother Budd (Michael Madsen), undermines her attack and then buries her alive in a cemetery. The details, of course, have no plausibility whatsoever, but anyone looking for reality in a Tarantino vehicle should be watching it in the first place. The absurdity itself is an interesting beast that never fails to amuse the audience.

There is also a deep resonance in the way the movie portrays its characters. On exterior levels, each of them is driven by the same agenda: that the only solution to betrayal is hardcore revenge. But that's not always the fundamental reasoning here, either; as much anger and determination each of them have towards one another, there are also moments when they drop the facade and start to reveal hints of a deeper regard (such as a moment when Budd admits to his brother, "We crossed her; maybe we deserve to die"). Heck, there is even a sequence here where Elle Driver (Daryl Hannah), perhaps one of the most enamoring female antagonists in the recent past, quietly pulls back her immense dislike of the Bride and simply says, after learning about her premature burial, that "she deserved better."

As a work of pure imagination, "Kill Bill, Vol. 1" succeeded for what it was: pure and visceral screen energy with a heightened sense of stamina. But what makes this film almost as great is that it has completely different motives: less action, more exposition, meaningful character elements and a sense of completion. It truly satisfies all of those who felt either deep admiration or pure impatience towards what the first volume had to offer. As a lone entity, the movie is intelligent and effective and more than stands on its own, but put the two halves together, and what you have is a product that, like the recent "Lord of the Rings" film trilogy, is a satisfying and groundbreaking work that movie audiences will be talking about long after other movies are forgotten.