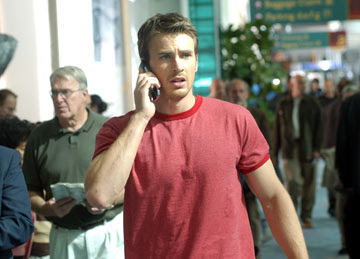 Armed with this premise, Director David R. Ellis propels his audience into a 94-minute frenzy of action and drama in what is probably the most intelligent and exciting thrill ride to hit the big screen in a long time. It is the kind of movie that all those half-hearted summer blockbusters of the past few months could only hope to be: an endeavor that is skillful in both concept and conviction, unleashed at such a high pitch of enthusiasm that it thoroughly engages you even when it doesn't seem like it is trying so hard. We have seen movies like this arrive in such an unexpected fashion countless times before - films of seeming obscurity that sneak up on us and deliver more than what they promise - but seldom have they arrived at as convenient a time as now. The recent selection of commercial flicks playing at the cinemas has inspired many (including myself, I admit) to disregard enthusiasm and anticipate little improvement. Seeing "Cellular," on the other hand, reminds us that even lengthy dry spells can be easily forgotten with just one fell swoop of genius.

The movie opens simple enough, introducing viewers to the lives of Jessica Martin (Basinger) and her young son Ricky (Adam Taylor Gordon), who is whisked off to school right before there is a break-in at her upstate house and she is taken captive by a bunch of men. Quickly and forcefully, she is tossed into the attic of an old house and locked inside, surrounded only by dust, old furniture… and as luck would have it, the remains of a destroyed telephone. Of course, there are not a lot of individuals in the real world capable enough to know how to reach the outside world with a mechanism as damaged as this, but rather conveniently, Jessica just so happens to be a high school Science teacher. All it takes is a little twisting of a wire here and there, and Jessica is ready to communicate with the outside world.

Unfortunately, she has absolutely no control over where the phone's signal goes, and when it reaches a random kid named Ryan, she knows she has to do all she can to convince an unrelated party that her life is in terrible danger. The movie establishes this task but ever so often forces her to be cut away from a direct conversation with her new acquaintance, particularly when one of her abductors (Jason Statham) comes into the room ever so often and threatens the life of her and her loved ones if she doesn't tell them what they want to know. "You have the wrong family!", she continually reiterates, completely ignorant of the possible reasons why she is in this grave situation. With Ryan catching all of these details over the phone, however, it means that his involvement doesn't just consist of him trying to find out Jessica's whereabouts, but also those of her son and husband, who become new targets on the bad guys' hit list and must be found before the abductors snatch them up as well.

The key to the success of this narrative is not the fact that it cares about details, but about the tension that comes with them. The movie is fueled by an exhilarating rush of adrenaline, utilized often and consistently at several points of the narrative, but not so much that it undermines the plot. The match is a lot more effective than this review can make it seem, and when you combine it with the notion that you are dealing with characters on the verge of emotional collapse, the dynamics give the movie a resonance that is simply exciting beyond comprehension. Combine the thrills of any six random blockbusters from the past month, and "Cellular" either matches or surpasses the total easily.

When I comment on the genius of this project, I do not restrict myself to the praise of either the direction or the writing, either. Given all its zealousness, "Cellular" is also a very well-acted undertaking, cast with talented and attractive stars that,, unlike most of their peers, emerge on celluloid like they have mastered an underlying understanding of the mindset of their characters. Consider Ryan (Evans), the young and handsome hero who is mistakenly forced into a situation he didn't ask for - in the film's earliest scenes, this is an actor whose mere essence on screen is all about showing off his chiseled physique. But rather than dwell on the notion of having eye candy on film, both he and the script take the persona to a height that involves a little self-discovery and quick-wittedness (qualities which a former girlfriend reiterates that he does not have to begin with early on in the picture). A lot can also be said for Basinger, whose career has been rather checkered since her late-90s Oscar-winning appearance in "L.A. Confidential." Her role as Jessica Martin isn't laced with pure victimization or helplessness in order to elevate the main protagonists; instead, the movie gives her enough incentive not only to be smart regarding last-minute decisions, but also be motivated enough to go through the awkward and dangerous task of making contact with a complete stranger.

The director, David R. Ellis, only has one previous credit to his name - the extremely silly but amusing "Final Destination 2" - but here, working with a story that is derived from the same man who wrote the brilliant "Phone Booth," he finds a cinematic pitch that reminds us of a time when movies could be enjoyed on multiple levels and not simply on individual elements. His use of comedy in between action and thrills also works to the picture's credit - such as a plot line in which a cop played by William H. Macy almost retires to run a day spa with his wife but gets back into the law enforcement mood when he becomes involved in Ryan's pursuit of the kidnapped woman on the phone - but the laughs are also not so consistent that the film loses its sense of seriousness. "Cellular," much like its nearest cinematic relative, is the type of taut and solid thriller that knows when to push all the right buttons and how to deliver a substantial payoff. Finally, a movie with the balls to both excite and challenge its audience!