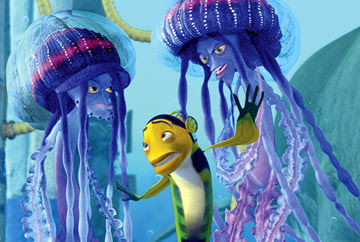 On the other hand, the studio doesn't insist on making a direct carbon copy, either - upping the ante a bit, they fill "Shark Tale" with a lot more pop culture references than what occupied the bulk of "Nemo." It's also a lot more urban than the latter, directed in part by the fact that its characters feel like they've been lifted from a UPN sitcom instead of an innocent child's storybook (and anyone who doubts that the main character is purposely modeled after Will Smith's own teen persona from the "Fresh Prince of Bel Air" years is obviously not looking at the celluloid clearly). Most would argue that this is the exact approach one should utilize when a movie may or may not tread so obvious a line of familiarity (especially if it were being released in the shadow of a film as big as "Nemo"), but somehow the result in "Shark Tale" isn't nearly as appealing as it should be. The ambition is admirable, some of the characters likable; but the overall tone of the film lacks accessibility, and much of the humor is so dry that even those who might get the jokes are not likely to find them very funny.

Smith's character, the quick-witted and smooth-talking Oscar, is the film's narrative center, an ambitious little creature who works days at the local "Whale Wash" (modeled, of course, after the Car Wash) and then dreams of wealth and power (and all the perks that come with it, like fancy penthouse apartments and stuff) by night. Those dreams would no doubt be a front-burner project, of course, if not for the fact that he owes hordes of cash to his boss Sykes (Martin Scorsese), who in turn owns quite a steep payment to Don Lino (Robert De Niro), the head of a shark mafia who threatens to take Lino's Whale Wash business and dismantle it if he doesn't fork over what he owes. Oscar, of course, is also the kind of fish who thrives at potential get-rich-quick schemes, but when he blows a major stash over an ill-fated sea-horse race, it puts him in a very compromising situation.

Enter Lenny (Jack Black), a Great White who, much to the displeasure of his father Don Lino, is a vegetarian. Oscar's latest moment of chaos comes when Lenny's brother is accidentally killed by an anchor, and the fish unwittingly takes credit for it. Though the lie lifts his popularity in the reef and allows him to be the kind of wealthy and power individual he has always dreamed about, it does nothing to change the fact that he has a family of angry Great Whites looking for him to exact their revenge. Lenny, who himself feels a twinge of guilt regarding his brother's demise, decides to team up with Oscar so the both of them can solve all of their problems in one fell swoop. Their secretive partnership works in their favor for a time, but how long could it possibly go on, especially when Oscar's closest friend Angie (Renee Zellweger) discovers their secrets? And furthermore, will Oscar catch onto the fact that his best friend actually wants more than a friendship from him before it's too late?

The plot, a seemingly convoluted series of misunderstandings and unlikely partnerships, is fueled much in the same way that the "Shrek" films were - that is, to spoof elements of pop culture over telling a story that may or may not be driven by itself otherwise. The difference, naturally, is that the fairy tales at the center of "Shrek" were styled in a manner that depended on the satire; in "Shark Tale," what you actually get is storytelling in which all the in-jokes seem tacked on just for the sake of saying something witty. That, at least, means the movie has a broader audience appeal than the general animated film (and a lot of the references to films like "The Godfather" certainly back up that notion). Unfortunately, any kind of movie who needs to reach so far back in time to spoof something so common is obviously not thinking with the times.

Children, as expected, will be dazzled by the colorful characters and all the neat little visual gimmicks that the film sets out to provide (even I can admit that a sequence involving a reef that resembles Times Square is spectacular in both scope and sight). But who is this movie for? Them? Us? Everyone? No one? Good question. The brains at Dreamworks have a solid foundation here that could have taken five or six different directions than what it currently does. Few will find it very amusing. Most will feel obliged to laugh just because it's a cartoon with cute round faces and a bunch of flamboyant characterizations. But this is in no way a match to any of the recent efforts to emerge from the Pixar hard drives. If "Finding Nemo" was a Utopia of deep-sea cartoon adventures, than "Shark Tale" plays as an inferior in need of some serious renovation.