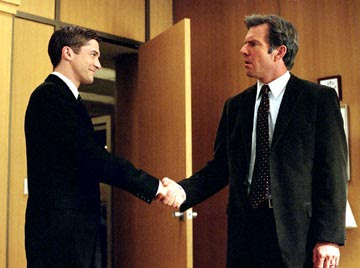 "In Good Company" begins with a premise that is probably not very dissimilar from what many of us in the world of journalism have experienced at one point or another. Dan Foreman (Dennis Quaid), a reputable advertising editor at the local weekly Sports Magazine, is put into a position of uncertainty when his chain is bought up by a major conglomerate, and established employees begin facing possible lay-offs as the company undergoes major restructuring. Perhaps not so common, though, is how this professional shake-up plays out; rather than being ousted by a corporation that wants to abandon journalistic rituals in order to stroke investors, the movie deprives him of his high-ranking position and turns it over to a 20-something kid, who is a hot figure in the business world but lacks the experience to be in such a place of authority. Naturally, Dan is kept on board as a cushion while all his friends are ousted… but the story doesn't directly confront this conflict until its hero finds out that his new boss is also dating his college-bound daughter. Talk about getting to know your employees better.

The odd thing about director/writer Paul Weitz's picture is that it plays with these situations in a relevant context instead of turning them into a platform for all sorts of corporate back-stabbing. Instead of living effusively by the "chew-them-up-and-spit-them-out" mentality, as most films might have done, the picture goes for the more feel-good stuff - that is, it creates fully-realized characters that are not just smart and dedicated, but also flawed and likable. Here they engage in veiled power struggles, smile slyly at one another and shell out seemingly half-hearted compliments, all before rushing off to either vent or stare blankly off into space behind closed doors. These behaviors are not the film's devices, though; they are merely the reality of the situation. Big business is indeed a dog-eat-dog world where few are sacred, but when one's personal feelings are at stake, even the most aggressive specialists can find time to be a little nice to each other.

Quaid's Dan fills the obligatory protagonist role quite resourcefully (although in later acts, his co-star essentially moves into the forefront). At the opening of the picture, Mr. Foreman, devoted husband and father (with a third baby on the way), is working long hard hours at his job as the advertising sales editor of a reputable New York-based sports publication. Though life outside the office is typical of the middle-class worker - his house has a familiar rustic vibe, and the family is getting ready to take out a second mortgage so that their oldest daughter can go to college - it's a vocation that Dan is both comfortable and happy with, and has been for several years. Unfortunately, just as things start looking up, a ruthless and determined conglomerate goes on a takeover spree and the magazine falls victim to it, losing its status as an independent publication. As such, out goes the safe establishment and in comes the money-hungry corporation puppets, who move fast in their restructuring of the various departments, and lay off whomever they consider to be excess baggage. The problem: Dan himself is not laid off, but rather de-promoted to serve as a lackey to a new young entrepreneur named Carter Duryea (Topher Grace), who is too unproven in the field to even successfully promote teamwork amongst his peers, much less manage the position of ad sales.

The movie supplies this setup with balanced arguments. On one hand, Dan needs his job and is understandably upset when the position is abruptly handed over to someone so new to the industry; on the other, Carter is an ambitious guy who just wants to get ahead in the world, and it's not directly his fault if the bigwigs above him put him into a position that compromises the status of someone much more established. Most important to the story, though, is that these arguments affect those involved in more ways than the professional. Consider, for example, the fact that Carter's marriage dies only a few short months after it starts, primarily because he's always off trying to conquer new heights instead of staying at home to be around his bored and lonely wife. His is the lifestyle where work also doubles as the hobby, and when he goes home at night after a hard day's work at the office, his only source of amusement is a fish tank that sits in the corner of a room. Dan himself doesn't know or care about his new boss's self-imposed solitude… at least until the guy slyly invites himself to the Foreman household for dinner one night so he can, in essence, see how a family lives. That turns out to be a big mistake for both, however, partly because it means that the de-promoted one will have to tiptoe around his boss in his very own home, and partly because Carter, now reeling from a failed marriage, will inevitably meet Dan's oldest daughter Alex (Scarlett Johansson), who is both beautiful and engaging. In other words, an ideal rebound girl.

Weitz's script isn't a terribly complex one, but it doesn't need to be. His selling points come in several forms here, from solid and believable performances to a shrewd sense of comedic timing that comes when you least expect it to. It also manages to create a fully realistic perspective on the workplace of a journalist, which comes as a definite plus to those of us who enjoy offering nods of approval at narratives we can see ourselves in. As for those performances, Quaid and Grace strike the exact right note as the two lead characters (some will no doubt get a kick out of the scenes in which the story sidesteps the professional relationship and treats their connection like some kind of unlikely father-and-son battle for success), and Johansson, who was regal in "Girl With a Pearl Earring" and off the mark in "Lost in Translation," plays the material straight enough so that she holds her own without necessarily taking away important development time from the bigger players.

The movie does hit a few kinks from time to time, however. Even though the entire concept requires - and then delivers - a few amusing supporting players, some of the more interesting ones are never developed as much as they should be; often, in fact, they are sidelined completely and then barely referenced afterwards. Something can also be said for the movie's awkward pacing - the screenplay's overall strategy is so tricky sometimes that the narrative itself is unable to keep up, and often we find ourselves lagging when we should be moving on to something else entirely. In retrospect, though, these are hardly serious errors. "In Good Company" sets out to say something both productive and thought-provoking, and on most counts the message comes across loud and clear. Furthermore, it keeps you on your toes by looking at things through reality instead of pretense, and by the end, I actually found myself thinking, "Yeah, that's probably exactly how all of that would happen."