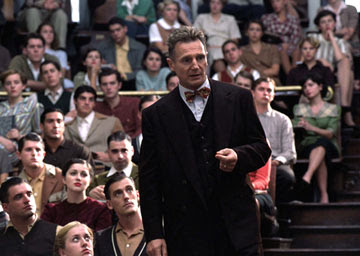 In the case of Alfred Kinsey, though, talking about it was only one step in shattering the walls of taboo that our civilization built around the concept of sexual intercourse throughout the first 50 or 60 years of the 20th century. Looking at it today, what with all the liberated sexual movements dotting our population, the very idea seems absurd. After all, in the middle ages, sex wasn't so much a quandary as it was an casual activity - but with the evolution of cultures and the coming of social status, it was thrown into the corners of a dark room and locked away, never to be spoken of. That the American society in particular treated sex like some kind of illegitimate child well through the modern era is not necessarily something to be proud of, but it was also difficult to step outside of those boundaries, too. Traditions lead to personal ignorance, and that in turn inevitably keeps the traditions established for future generations.

Kinsey knew full well the moral restrictions that society instituted regarding the subject, but that made him all the more focused and passionate in his goals. An American scientist (and later college professor) who specialized in the studies of zoology, his strict upbringing by a minister father gave him a full perspective on the narrow view-plane of his peers, especially when it came to a subject that he, like so many others in youth, required open and honest discussions about before making it a reality. As such, a handful of generations of teens fell out of touch with their sexuality and lived by the notion of trial-and-error. Even poor young Alfred, who seemingly embraced his human desires like they were no different from the instincts of ordinary Earth creatures, fell into this unfortunate trap. Though he and his wife were virgins on their wedding night, the inevitable first sexual encounter was ill-fated because neither had the knowledge nor the preparation for it. Theirs was an experience, though, that provides a fitting assertion to the entire approach of sexual conduct: if it is indeed an anchored notion that every one's first time of intimacy should be special, you sure aren't going to get it by remaining silent.

The Kinsey of this movie is a wild beast whose ideals and methods are too progressive for his time. He treats sexual nature like it should be more than just a whisper in the dark, and orchestrates a full-scale study of American sexuality that both intrigues and frightens people, at first on his college campus and later in an evolved public life. Unfortunately, his approach is also not without its own distinct flaws; what with him applying his scientific methods of investigation to a full-fledged inspection on human sexual behavior, the perspective is all about actions and nothing about emotions, and during the process he often hurts and alienates those who are in his circle. But what is most important - at least in the long run - is not the method but the motive; single-handedly, his search for the full story on the sexual behavior of the modern male and female jump-start the wheels of change, and ordinary people from across middle-America are suddenly sharing their lives with him, seemingly removed from the inevitable discomfort that would ordinarily fill the room.

With even slight progress, though, there also come setbacks. When Kinsey publishes his findings on the human male's sexual behavior in 1947, the report is such a widely-read commodity in the American mainstream that its readers see it as informative long before they regard it as revealing. If that is not enough of an accomplishment, however, the determined "sexologist" perhaps pushes his agenda a bit too far in the eyes of society when he examines the nature of the human female several years later. Its release, needless to say, is met with an inverted reaction; the audiences revile it, and critics scoff at the notion that something as pure and gentle as a woman would even know about things like masturbation, much less practice them. Ironically (but perhaps not coincidentally), both the success and the dilemma of this character follow a distinct pattern that has been seen already in a handful of Hollywood bio-pics in 2004, in which real-life protagonists rise to fame for being different and then quickly fall from grace for the very same reason.

Liam Neeson plays this role with a certain compassionate quality, making the larger-than-life persona of Alfred Kinsey into something more human than either of his revolutionary publications might have suggested. He savors the character's flaws like a canine licking wounds, often stressing them when the material seems like it is more interested in viewing him as a statue rather than as a man with ambition. Even then, though, the enthusiasm is not without additional dilemmas - for example, when one of his studies leads him and his assistant, Clyde (Peter Sarsgaard), into the very much hidden 1940s homosexual underworld, the two are so involved in their research that they make themselves participants, and after an innocent discussion on their own hidden tendencies they engage in their own sexual encounter. In any ordinary movie and with any ordinary set of characters, the action would certainly spell outrage for the wives. But Kinsey doesn't hide behind walls to cover up his own basic desires; he confronts his wife Clara (Laura Linney) with the news, which she greets at first with sadness (understandably) and then follows up on with her own affair. Neeson also has the privilege of pulling off a scene here that forces his character to react to his wife's own extra-marital aspirations; what is good for the goose is indeed good for the gander, but the look of bafflement on his face at that specific moment is priceless.

The director and writer of the film is Bill Condon, who studies behaviors just as much as he studies literal personas, and here conceives a film that, very much like the historical figure it is based on, creates grand chaos instead of conforming to old standards. His last picture "Gods and Monsters" explored a similar persona, in the regard that Hollywood director James Whale, much like Alfred Kinsey, lived a lifestyle that led to alienation and ultimately isolation. But it's not just a fundamental understanding of human behavior that makes Condon's latest endeavor so resonating, either. It is well crafted, beautifully shot, well paced, and acted by thespians who are just as dedicated to the material as the man behind the camera is. The movie also never gives you the sense that it's wearing out its welcome. At 118 minutes, "Kinsey" opts to stay on one specific path when it could have easily taken several side roads. Strong subplots no doubt might have ultimately worked in the film's favor, but the director doesn't subtract anything crucial from the payoff by opting out of that route. The film is certainly happy to explore supporting roles (the screenplay does some great work with a college superior played by Oliver Platt, for instance), but the protagonist and his studies are the primary target, and the crosshairs understandably stay there most of the time.

Even more importantly, however, the movie basks in the afterglow of all its enlightening inclinations without any sense of shame or regret. It is blatantly sexual and revealing - both on a narrative and on a visual scale - and dares not restrict itself when it feels more needs to be said or explored. At a time when the political mainstream also seems adamant about returning to the social and moral standards of previous decades, the movie is also relevant in more than just a historical context. Brave, insightful, often funny and always dramatic, "Kinsey's" bold approach is easily the most refreshing seen in a film all year. It's the kind of picture that reminds you of the continued potential of the cinema.