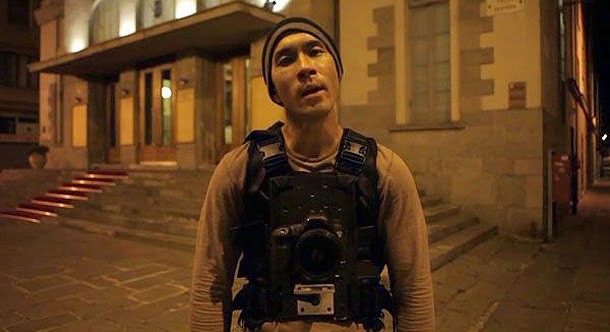 Granted, such naivety displaces them from the pool of victims normally supplied to movies like “Affliction.” Their lives – and their optimism – are indeed full of the kind of robustness associated with blatant soul-crushing terror, but they emerge as much more level-headed and put together than the victims of the standard Dead Teenager Movie, too. At the opening of the film, the scenes are even presented as if a precursor to a heart-warming documentary about the possibility of life; Clif, the cameraman, speaks enthusiastically of the plans he and his buddy will partake in, while Derek, unnerved by his physical fate, reveals no traces of self-doubt despite having a family full of concerned pessimists. To them, the world is at their feet and the journey ahead will be the most rewarding undertaking any of them has ever accomplished. It never dawns on them, alas, that nations beyond their own are, apparently, housing supernatural influences that exist to terrorize and curse all those inquisitive sorts who wander into their sphere. Audiences must be thankful that so few pick up on that reality until far too late.

The beginning of realization comes quickly, in a scene that transpires after a drunken night at a local nightclub in Paris. Clif and a mutual friend tease Derek over the fact he has found no success in hooking up with any European women, and encourage him to chase after a hot girl at the bar. After he makes a successful connection, the two horny youngsters disappear back to the hotel, and the two other guys decide it would be fun to prank him by interrupting their sexual activities by barging in while the camera is still filming. Their arrival, however, is instead met with shock: that beautiful girl is now long gone, and Derek is lying naked and covered in blood, the result of gaping open wounds on his neck and arm. Where did they come from? And better yet, did that now-missing girl have anything to do with them? There are no clear answers even to the apparent victim, setting the stage for the inevitable progression of a horror movie filled with the kinds of revelations that leave the survivors quaking in dread.

But then, an interesting surprise transpires. The movie does not opt to play it straight with the material and go the route of its nearest cousin, the highly intense “Quarantine.” Instead, the story pulls its resources from deeper influences – which I am too nice to reveal here – and creates a scenario that is not only unexpected, but also rather refreshing. I was awestruck as much as I was humored. The reality is not a direct one, either. Derek’s situation grows ever-so-bleak only in slight increments, suggesting a virus that will take its time to overpower its host. Clif watches on worried and vigilant about the seemingly deteriorating condition of his dearest friend, but is powerless to help, especially in the thick of a European medical field that has no probable idea what they are dealing with. For each ailment that inflicts the victim, some kind of inhuman ability also emerges: super strength, incredible speed, and even an ability to leap high distances. Let’s not forget the adverse reaction to sunlight, either. Alas, neither victim nor observer is able to explain any of these physical changes, which inspires the traditional array of dissonant emotions. And always, in expected fashion, is the director’s camera watching on like a silent spectator, absorbing the details with the kind of fascination normally reserved for witnesses to colossal disasters.

“Afflicted” presents these characteristics in a technique that was propagated in the late 90s now known as the “found footage” sub-genre, where all the action takes place as if in real-time in the hands of victims who just happen to be carrying their own cameras during the unfortunate events. The genre’s birth, however, also came on the heels of another radical shift in horror standards: the notion that such movies could also be more challenging if equipped with some level of self-awareness. In Wes Craven’s “Scream,” for example, all the teenagers who walked around with targets on their backs knew that they were mere slabs of meat in an ambitious killing spree, and dealt with the reality instead of being oblivious to it. In “Final Destination,” an escape from certain death set the stage for unfortunate survivors walking around in fear of an unseen force plotting against their existence. Fifteen years after this technique was popularized by “The Blair Witch Project,” a dose of similar cognizance would be well suited in this sub-genre of handheld shockers. Because such a concept hasn’t quite taken off, a film like “Afflicted,” which is well-made even for its genre, does not always find of a distinctive voice outside of its odd but fascinating idea. It is a minor achievement in a field of exhausting and endless visual exercises, noteworthy less for its passable excursion through horror clichés and more for its ability to create convincing special effects without always blurring them in the jumble of shaky camerawork.

And yet I confess I was entertained on some level by what was seen. The characters, played by the filmmakers themselves, are drawn out enough to seem plausible in the conflict, and the steady pace of the material does not overburden the mood of the picture with incessant waves of clichés or predictable outcomes. There is a formula to it all, but it is handled well enough to build something of substance, and by the end I was honestly so enamored by the premise that I simply could not predict how it all was going to end. When it comes to the ongoing cycle of handheld horror films at the local movie theater, there are far worse choices than a movie like “Afflicted.” It believes in itself, which may be all that one needs to justify a quick viewing. After one of my own, I concede I can find justification in the continued development of the genre, because to see a camera in the hands of a potential victim is to see a heightened sense of urgency that has been sorely absent from traditional horror films as of late. I just continue to hope for some characters who know what they are getting themselves into the next time around, that’s all.