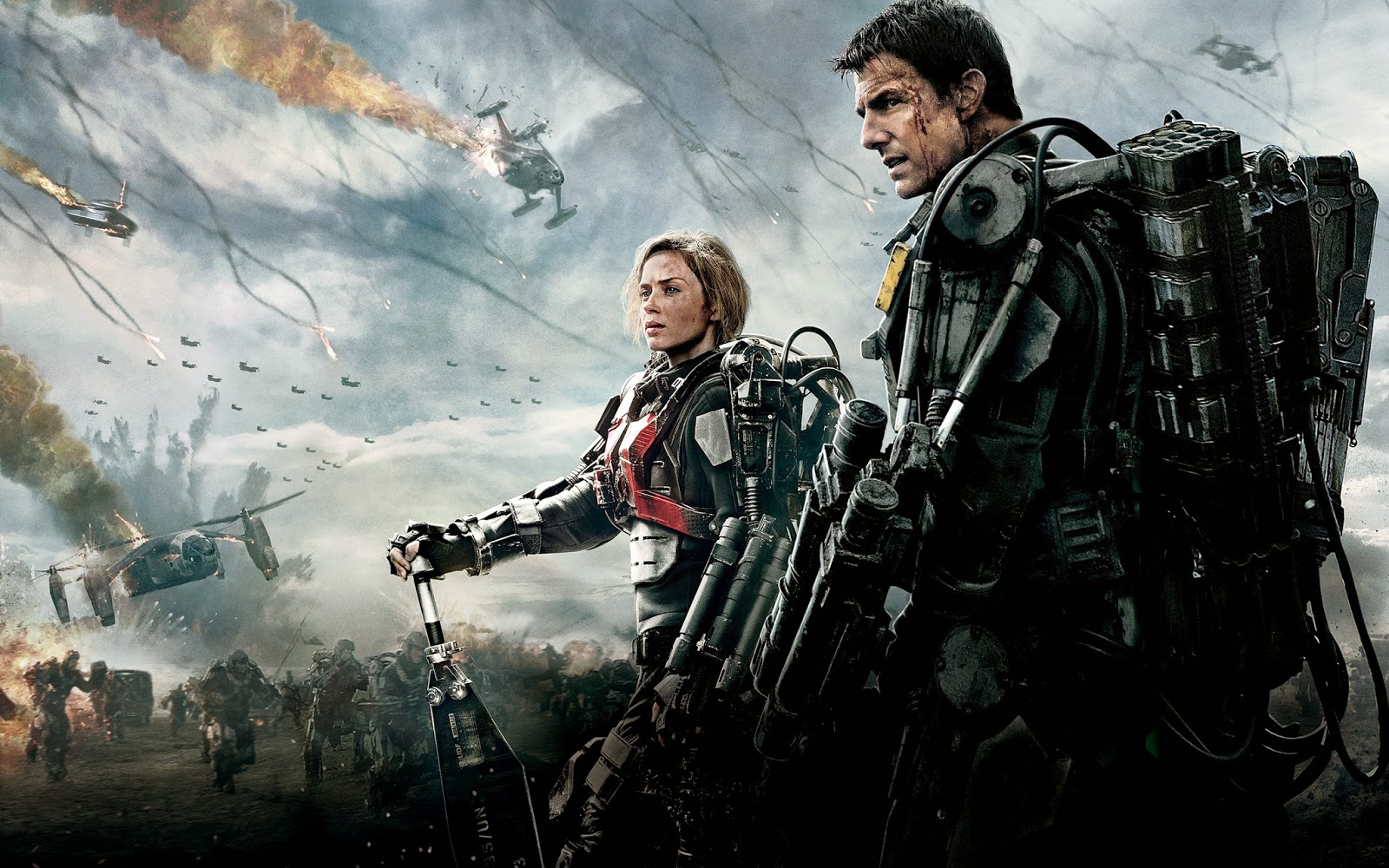 The paradox is almost crude, even gimmicky. It conjures up an immediate comparison to “Groundhog Day,” about a disgruntled news reporter played by Bill Murray who finds himself trapped in a time loop until he learns to be a more likeable person. Like that film, “Edge of Tomorrow” uses this detail primarily as a means of character building; since the hero is a smooth-talking military major with no battlefield experience, the anomaly he becomes caught in exists as a means to train and develop his war skills over several attempts, without necessarily holding him to the limits of outright mortality. And yet by using the idea in modern movie science fiction, other facets are enriched. This is not a run-of-the-mill genre yarn in the vein of countless modern sci-fi blockbusters, but a fascinating and enjoyable vehicle that creates an ambitious illusion in a premise that, basically, exists at the epicenter of the aliens-vs-mankind formula. And in the center of these exciting qualities is the unwavering Tom Cruise, an actor who, after “Minority Report” and “Oblivion,” now seems to have perfected the art of adopting inquisitive personas in stories of psychological complexity.

The movie plays like an elaborate plot puzzle cloaked in the skin of a traditional action picture. In the opening scenes, generic news footage cuts back and forth between details that are critical in the evolving conflict. What you need to know: an asteroid has crashed onto Europe, and a grotesque race of goopy insect-like aliens emerges to do non-stop destruction on anything in its path. The super-powers of Earth respond with heavy artillery and armed forces, but each attack on the beings is seemingly in vein; the invaders grow stronger and more aware of what will go down on the open battlefield, and the war wages on with an increasingly bleak outlook. The United States government, however, responds by introducing a new weapon in the form of a mechanized armor suit, which when equipped can arm a simple man with enough power (and bullets) to stand a chance against such a challenging enemy. Major Cage (Tom Cruise) is a skillful salesman when it comes to marketing this weapon as a recruitment tool, and its recent success at a victorious battle in France, in which a lone soldier named Rita (Emily Blunt) wore the suit while slaughtering hundreds of dangerous aliens, becomes the catalyst in inspiring millions of new recruits who come flooding in off the streets.

The timing is impeccable for deeper agendas. Under the command of General Brigham (Brendan Gleeson), the united armies are ready to commence “Operation: Downfall,” which will (hopefully) result in the full reclaiming of Europe from the grasp of the Mimics. Arrogant enough to assume that the utilization of these new suits is all that military forces need in overtaking the enemy, however, Brigham enlists Cage to spearhead the revolt, which would effectively drop him on the front lines despite never having any formal ground training of his own. Tensions evolve in a scene with cleverly devised dialogue exchanges; Brigham respectfully refuses to see any other scenario, and Cage attempts to blackmail his way out of the position before his determined superior squanders the threat. In the next scene, the bewildered major wakes up on a military ship as nothing more than a new recruit stripped of his title.

The events of that day become well-known to the audience, primarily because the screenplay establishes these moments as the start of Cage’s inevitable time coil: he meets a sarcastic but arrogant commanding Sergeant named Farell (Bill Paxton), is introduced to a host of quirky grunts that he will fight alongside, participates in a quick training session with the armored suit, and is then dropped into the fray during a battle sequence that, inevitably, always begins with some kind of ambush on part of the Mimics, usually while his team is still caught in mid-air. On the first occasion, Cage’s inevitable death comes when an “Alpha”, an alien rarely spotted on the open battlefield, is killed just before his own demise, and its DNA splashes on Cage’s face, effectively transferring the anomaly to him like some kind of quick-acting virus. Because of said circumstance, Cage doesn’t simply die; instead, any and all subsequent meetings with death are followed immediately by his return to that same moment when he woke up on the ship. And not only do all the events occur each time exactly as they did before, the story robs all of them, except for Cage, of self-awareness.

Explanations are inevitably supplied by Rita, the heroic face of the resistance. After a chance encounter on the battlefield, Cage suspects this quiet but brooding figure’s success has less to do with her popular suit of armor and everything to do with the same paradox that he is now currently trapped in. His instincts prove correct, and as the earlier host of the alien gift, she learned, developed and mastered the ability to anticipate the movements of the enemy and combat them to rousing success, ultimately resulting in her well-known victory in France. Now the task falls to Cage to use this newfound ability to squander the inevitable ambush on the beach before he and his comrades are made casualties of it, though much more foreboding realities also loom in the distance: unless he and Rita can locate the “Omega” source soon and destroy it, then no amount of time travel or skill-building will assist in defending humanity against certain extinction.

All of this is adapted from source material that eluded my knowledge until now, an extremely popular science fiction fable released in 2004 called “All You Need is Kill,” which found immense success in Japan before earning dedicated followers overseas in the subsequent years. In the hands of director Doug Liman, the movie distinctly recalls the sentiments of Japanese anime; there is heavy emphasis on the intricacies of gadgets and mechanisms, while the aliens themselves have, for better or worse, the cartoonish look of the villainous beings buried in the pages of Manga (are those legs the Mimics are walking on, or tentacles?). It is an understatement to say that the visual effects are wondrous, too; intricate and sharp, they seem to expand the movie’s vision beyond the frame while servicing the plot first and foremost, and cinematographer Dion Beebe is faultless in his ability to frame images as if they are part of a war-driven conflict rather than an outlandish sci-fi spectacle (the beach scene, for instance, would seem more like a reenactment of the invasion at Normandy in a movie with fewer mechanics and no gooey aliens).

But then, an unfortunate turn of events: the movie retreads to formula in the third act before succumbing to an ending that undermines the intrigue of the premise. Why such a drastic shift in momentum? The most educated guess I can offer is that Liman, a relative newbie in a sea of established blockbuster filmmakers, simply underestimates his own audacity; he is content to follow the clichéd patterns of his predecessors, allowing the need for some kind of positive closure to undermine the bleak sensibilities of what comes before. With a more meditative and challenging conclusion, however, “Edge of Tomorrow” could have been one of the rare great films of a summer crowded with action pictures. But it doesn’t quite arrive at the peak of its power, and by the end, despite being so thoroughly engrossed in the multi-layered premise and all the questions it raises, you can’t help but sense this was a movie capable of going much further a distance.