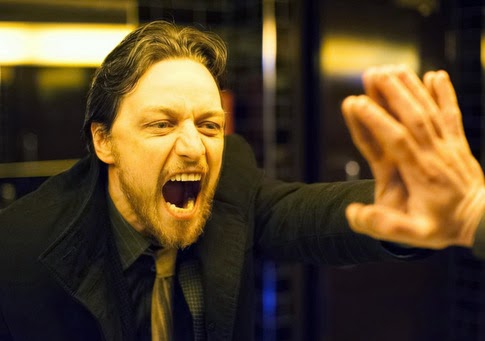 Here is a relentlessly shallow and nihilistic movie, a 97-minute exercise in cynicism with nothing of substance standing in a manic foreground. And that’s a discouraging prospect, given the fact that the source material was penned by Irvine Welsh, whose own “Trainspotting” served as the groundwork for a much better movie that too found significance in the underbelly of mental and social impurity. But the same conceit that inspired Danny Boyle to write and direct that story, I’m certain, is not the same that director Jon S. Baird uses here – both movies recognize what notes to hit in a narrative symphony, but only Boyle’s looks deep enough to build a rhythmic progression. “Filth,” in contrast, is too eager to skip past such buildups. It is all about crescendos, and surrounds them in such blaring and incomprehensible noise that there is not a single moment of legitimate commentary left in its wake. It is the kind of movie best suited to audiences who have abandoned all hope in humanity and are suckers for ceaseless suffering.

The film stars James McAvoy in a role that obscures all hints of liberation. He plays Bruce, a detective sergeant at a local police bureau who has just been assigned an important murder case that occurred in the nearby Edinburg tunnels. During the early scenes, the investigation itself appears to be of great importance; the camera is present at the moment of the young Asian student’s unfortunate demise, and it sees the culprits with a level of clarity that leaves little doubt in the details. The key observation, however, comes from a witness wandering the tunnels during the murder: shot in a vivid light that makes her look almost porcelain, her presence is as significant as her identity. But Bruce, aspiring for a promotion to inspector, does not follow through with the details, and turns his full attention to indulging in momentary sensations. Why bother at all with the implication of a police case, you might ask? Because the movie needs it as a device to contrast the antics of an unravelling mind, and they include (but are not limited to) heavy drug use, intimidation, cruel pranks, obscene phone calls, suggested mental illness, obsessing over lost relationships and verbally abusing women after sexual encounters. And not only are there suggestive fantasy sequences interjected, one of them even contains a musical number.

The Bruce character is somewhat of a morbid curiosity. He isn’t written with any sense of vision, but the movie is content to develop him from a plethora of characteristics that seem directly inspired (or ripped off) from a variety of other cinematic sources. “A Clockwork Orange” is obviously the primary homage, but traces of “American Psycho” also sneak in – the scenes of Bruce doing drugs at the nightclub with his co-workers are surprisingly parallel to Patrick Bateman’s – and there are isolated moments of paranoia and brutal vulgarity that recall David Cronenberg’s “Naked Lunch” and even Martin Scorsese’s “The Wolf of Wall Street.” Colleagues on the force gather around him, meanwhile, like opportunists wanting to soak up some of his misplaced esteem, and yet none of them show the slightest acknowledgment that his behavior is indicative of an un-medicated bi-polar patient. Only a quirky psychiatrist played by Jim Broadbent, in fact, bothers to confront the problems head-on, and there is a bizarre sequence in the middle of the picture that may endure with enthusiasts of abstract art: in it, the psychiatrist psycho-analyses his enigmatic patient and overwhelms him with visuals so schizophrenic that look like they belong in a Terry Gilliam endeavor. Not-so-minor detail about this scene: would you be at all surprised if I told you Beethoven was playing over the soundtrack? Of course you wouldn’t.

The emotionally and mentally damaged are fascinating subjects of many a great character study. Most, however, earn the faith of their audiences based on the razor-thin possibility that the most damaged of human minds may be redeemed in the end, or at least perish for the sake of resonating statements about our human psychology. But “Filth” is not ambitious enough to comprehend either of those traits. Here is a movie so intoxicated by downtrodden diatribes and unfocused kitsch that it outright denies its main character of any possible empathy. Sometimes that prospect results in some very cruel moments, including several scenes where Bruce subjects his best friend (Eddie Marsan) to all sorts of vicious mental and physical pranks, and another where a colleague played by Jamie Bell is consistently reminded about the lackluster size of his anatomy. What dramatic purpose do these moments serve in a movie so caught up in transparent malice? Absolutely none. They are shameless displays of shock value masquerading as probing social statements, and the movie is so detached from them that their tone is bathed in an unrelenting gloom. Some, one could argue, may discover a level of black humor in those antics. Those are not the people I look forward to hearing from when this review graces their notice.

And what of McAvoy? It is almost shameful to see such an arresting performance being housed in a movie so unforgivably creepy. Did he see the material from a place of profundity, or was he one of those devoted professionals on set making the most of an uncertain situation? I dunno. But he plays the role with clarity and conviction till the absolute end, audaciously pitching the performance at a level of sheer scorn without succumbing to the allure of caricature or overkill. Watching him, there is no doubt we are dealing with an actor here whose evolution is happening, in front of our own eyes, with rapid triumph. But what advantage does he have in a movie where the fruits of labor are puckered beyond regard? Like a victim of some unknown emotional trauma, “Filth” has no qualms about lashing out at its audience without perspective or reasoning. Calling it a nasty and unpleasant experience would understate the obvious.

Directed and written by Jon S. Baird; based on the novel by Irvine Welsh