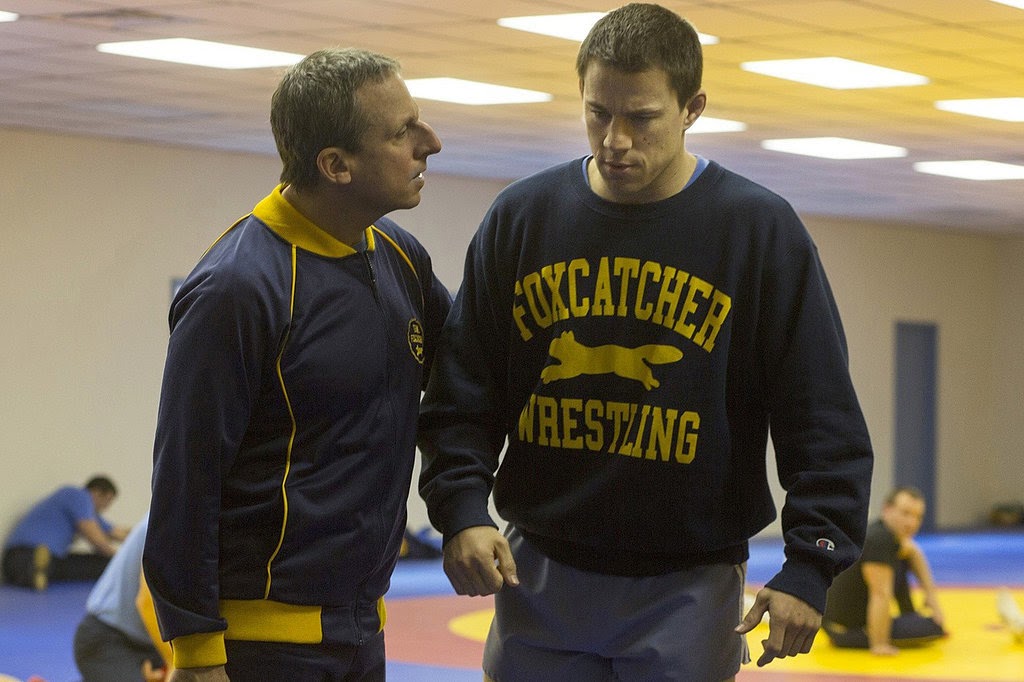 The thought process of being the best at something is one of the more blatant common bonds of movies of the last year, but for “Foxcatcher,” those realities are stirred from more literal sources: namely, a series of events that actually transpired over the course of several years, when a mysterious figure in the wrestling world took two brother athletes out of the doldrums of their routine, made them members of a prestigious training group, controlled their entire existence and then, in an act of madness, gunned one of them down in cold blood. Little is left unspoken of those details, and that presents an immediate challenge for the architects of this unflattering character study: namely, what can you possible say about people that weren’t exactly obscure, or about the events that lead to the tragedy that is already absorbed into social consciousness? The answer for director Bennett Miller is less about specifics and more about unspoken motivators. Here is a movie that regards people with sympathetic gazes rather than details, fully aware how all things will pan out but fascinated enough by the inner-workings of flawed psyches to keep our eyes watching on in sobering deliberation.

The emotional center is Mark, the youngest of the brothers, who in the early scenes is shown grinding away though a monotonous routine that has followed him like an unruly curse. At a school gathering where he shows off his gold medal, young eyes look on not in admiration or wonderment, but in passiveness; it’s as if they have never heard his name, much less recognized the prestige he wears around his neck. The reality of that distinction is echoed by saddening observations of his private life, which involve almost nothing of consequence other than solitude and silence. What does he desire, exactly? One suspects that it comes down to basic direction; thoroughly enamored by the sport he has found success in, it drives him in almost every waking moment like a guiding light of influence, and the almost distant concern of his brother serves to fuel those passions with a touch of envy.

Those sentiments rise to the surface when an enigmatic figure invites him into the corridors of a gorgeous mansion in the country to discuss new career opportunities. John (Carell) is, too, a loner driven by an almost fetishistic love of an obscure sport, and he speaks of it – and of his position as a training facilitator – in rambling metaphors (“A coach is a father!”). But something about his watchful instruction stirs Mark so deeply that he agrees to join his team of aspiring athletes to train for prestigious championships. David, meanwhile, isn’t as easy to persuade, and that goes to frustrate the nature of du Pont, who is so thoroughly enamored with the prospect of success that he never ceases to acquire new figures under his umbrella of control. The irony is that none of it is obvious – at least to the characters – in the film’s early stretches; only when the chips are down in competitive moments does his almost radical nature rise to the surface, often for the purpose of intimidation. Can we fault him? Many of the decisions never hinge on sympathetic, and yet we understand the reasoning. The absence of loving parental figures is the source of much of the trauma these men inflict on one another, but we remain watchful over them like optimists hoping for a powerful shift in destiny.

The key to our attention, I think, comes down to on-target casting. Tatum, Carell and Ruffalo are not normally the sorts of actors who frequent the terrain of morose drama, but they are not so alien to it that it displaces them from the perspective. In that regard, each of them embodies these personalities as if stimulated by the sheer novelty of their undertakings. Carell in particular strikes an array of resonating chords; normally a comical sort whose humor is stirred from the prospect of seeming caught in discomfort, his du Pont is so utterly deadpan that he garners that sense of menace with minimal dialogue delivery. Ruffalo, more versatile than most give him credit for, is very likeable as the brotherly David, and adds charm to a portrait of a man who seems more genuine than anyone in that moment probably would have given him credit for. And Tatum, who is fairly accustomed to the sorts of roles that require him to furrow his grin into a sour pout, is very good as the film’s sympathetic hero; quiet and simple, we acknowledge his nature with a concern that builds to respect, and in a key moment of violent verbal exchanges we sense that none of it is labored by a movie plot, but merely constructed out of a lifetime of experiences that have quietly placed him in the shadow of a more outgoing sibling.

In terms of underlying psychological values, “Foxcatcher” shares a great deal of commonality with “Whiplash,” another recent picture that dealt with the controlling nature of professors who would do anything – including abusing and threatening others – to climb to the top of a professional ladder. While that movie instilled those sentiments in urgent and dramatic underpinnings, this one arrives at those conclusions in a more meditative manner; dialogue is minimal, actions are without fanfare, and exchanges between characters do not directly reveal the psychological cracks for any sort of feverish payoff. “Whiplash” was a far greater film, but Miller’s excursion is not to be dismissed; from a more subdued standpoint, it arrives at very powerful acknowledgments and takes the time to consider them out of the context of their immediacy. In the final shot of the film, the surviving Schultz brother enters the next phase of his life just as he left the other: with a quiet regard and acceptance, because hey, that’s just how we carry. Bennett doesn’t question why we might make the drastic decisions we do, but understands that they come from a place that is usually indescribable, and accepts them as facets of an existence that often functions like a deafening storm of repeating tragedies.