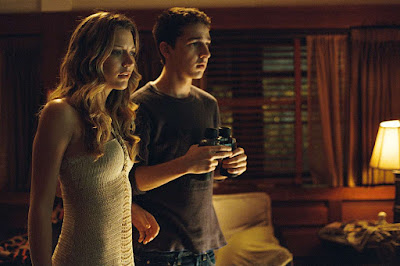 The main character in Alfred Hitchcock’s “Rear Window,” a photographer with voyeuristic curiosity, was by many measures the most sophisticated of modern movie heroes. An everyday observer whose intrusive behaviors mirrored the sentiment of curious moviegoers, he made the sorts of discoveries that have become the anticipation of the audience, and countered the reveals with a clever brand of wisdom, caution and investigative proficiency; by all reasoning, he seemed to follow a routine that is as ideal as it is effective. So potent was his prowess for studying the full disclosure of others that when it came to building the chutzpah of protagonists in similar stories over the years, most filmmakers turned to him as their primary source of inspiration. But seldom before – save for fringe endeavors and television remakes – has anyone made an active attempt to retell the entire underlying experience of L.B. Jefferies in any implicit detail. There simply has been no need for it. And in the age where his initial discoveries play like minor offenses compared to what is possible, why would anyone spare the time to reach that far into the standards of old for anything, least of all a mere characterization?

Inevitably the lessons of Hitchcock do live on in the skin of modern adaptations, some less effective than others. “Throw Mama for the Train,” one of the most famous, essentially altered his “Strangers on a Train” into a more comedic scenario. “A Perfect Murder” retooled the fundamentals of “Dial M for Murder” for more devious implications. And D.J. Caruso’s “Disturbia,” another recent example, carries the daunting task of rethinking the premise of “Rear Window” in all sorts of 21st century hoopla, as if to create the assumption that there remains much uncovered ground in the comforts of the soulless suburban lifestyle. Social statements aside, the movie has loftier intentions. There is a fine line separating the suggestive context of a Hitchcock thriller and violent modern torture porn, and here is a movie that walks that tightrope between simplifying the broad strokes of the earlier example and coming to terms with the gratuity of the latter. Many ought not to assume as much from any movie about such subjects made in the wake of the “Saw” franchise, but you’d be surprised at just how potent an idea like this does remain if given the proper treatment.

Caruso is dedicated to such foresight, and “Disturbia” is, amazingly enough, a rather effective little film – well-made, thoughtful, respectably acted and played with the kind of care and precision that made the architect of these ideas so treasured in the first place. That is not to say it is any kind of grand achievement when it comes to mimicking the skillful and careful tension of its parent, but that isn’t the point; for this filmmaker and these particular actors, it’s about recognizing the undercurrent of suspicion we each possess, and how the unnerving complacence of a standard lifestyle can bring it to the surface, especially in the face of events that create their own sense of uncertainty. The young man that stands behind the binoculars of this sentiment is no seasoned photographer, nor is he any sort of expert of life experience. But he is a good kid, driven by hard personal tragedies that supply him the drive to wonder, perhaps rightfully, if a neighbor is capable of inflicting unspeakable harm on those he comes in contact with, including a new female neighbor he has a crush on and a mother he holds closely to his bruised heart.

That young man Kale is played by Shia LaBeouf, in a role that works congruently with his tempered approach as an actor. At the start of the picture, he and his father are out fishing and enjoying the comforts of their familial bond when a terrible accident on the road costs his dad his life, and forever sets him on a path of personal self-loathing. At school, when he is chastised cruelly by a Spanish teacher for procrastinating, he reacts violently, and becomes the subject of house arrest. Directionless and without much optimism, his paralyzing isolation turns him into a voyeur of the ongoing antics of a slew of neighbors, including one (Sarah Roemer) who recently moved into the house next door with her parents. Kale is keen at picking up on details with those he has strange fascinations for, and in a later scene LaBeouf is given a golden chance to show us how good he is at being natural in young love scenarios; after winning young Ashley’s attention, he rattles off a list of quirks he has come to notice about her, including how she loves to read classic novels on the roof outside her bedroom and how she always gives herself a quick glance-over in the mirror before going downstairs.

Their interactions play like a youthful recreation of the love affair between Jimmy Stewart and Grace Kelly, a gimmick that a story like this uses to amp up the gravity of thrilling consequences. As easily as Kale aspires to win Ashley’s affections, he is also quick to notice disturbing developments going on with the other close neighbor, a quiet and creepy man (David Morse) whose detachment seems to mask dark agendas. He drives home late at night and appears anxious. A dent in the fender on his old Ford Mustang mirrors a detail he overhears relating to a recent female murder in the Austin, in which the same car was apparently used. One night, he invites a young hooker over to play, and his camera catches her running and screaming as if trying to flee. And later still, both teenagers spy him carrying a large sack down a flight of stairs outside the house, with feint traces of blood on top of the plastic. Their observations are not exactly careful or quiet, however, and there are two tricky scenes in which menacing Mr. Turner warns them both that he enjoys his privacy and would appreciate their cooperation – as a plea or as a deadly warning, we are uncertain.

The movie cycles through this game of wits while downplaying the obvious, mostly because it needs to; a thriller about characters is made all the more thrilling when we aren’t sure who is projecting the truth. LaBeouf has great fun in coming across as a paranoid teenager obsessed with the details, but Carrie-Anne Moss, who plays is mother, balances that with a respectable pragmatism that gives the film a much more sincere edge. These aren’t characters caught up in the hysteria of the scenario for the sake of just prying or causing trouble, as most modern films would normally do. Caruso, in showing such context, proves that his driving force owes just as much gratitude to Hitchcock’s method as it does his own sense of priority. Neither the script nor the direction are overly sensational, even though they could have been; the details carry us gradually through the situations without wrapping them in ambitious nonsense, and the climax – though very graphic at times – is effective at pushing us right to the pinnacle of a dark realization, thoroughly engrossing us in the process while our eyes cower in wonder at what lurks behind the walls of Turner’s strange house of secrets.

There are drawbacks to putting these details in the hands of teenage leads. Because adolescents are seldom ingrained in the routine that suggests lifelong experience, many of their decisions are often made impulsively, and with dire consequences. Consider a scene when Kale foolishly suggests that his best friend Ronnie (Aaron Yoo) sneak into Turner’s garage, and carry a camera with him to film what he sees – aside from the fact that it is a twist that bears no purpose other than to open up a gateway to a bloody climax, it also leads to an awkward encounter right after, in which audiences are left to wonder how one person could go from one place to the next without being noticed. The logistics of such things aside, what teen in their right mind would be so obvious as to follow around a menacing neighbor at a grocery store? Or be so stupid as to film the details from an upstairs window while the bedroom lights are on, making him visible to his target? Yet we are willing to sidestep the obvious drawbacks because “Disturbia” isn’t derailed by them. A lot of things happen in 105 minutes of suspicious events, but they keep our interest because they are played persuasively, and the actors are credible conduits for a story that thinks about gradual movement instead of filling the screen with endless scenes of graphic violence and bloodshed. When it comes to recalling the best of Hitchcock’s important film lessons, here is a decent movie that at least remembers the buildup is just as important as the jolt.