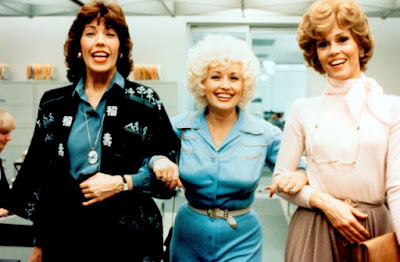 Audiences leap at the chance to share a bond with characters that mirror their everyday struggles, but few have been quite as focused (or resonating) as those that occur in the workplace. Colin Higgins’s “Nine to Five,” one of the more popular films set in office culture, is as relevant in that sentiment as it is funny. Many ought to have expected it to fade into oblivion following a mildly successful response back during its initial theatrical run, but like a stampede of epiphanies it carries on even now, rousing its viewers to assertive cognizance and inspiring a plethora of filmmakers to mirror the perspective (one of the more famous, Mike Judge’s “Office Space,” can probably be seen as an indirect remake). To the audiences of the time, the three central figures were the informed embodiment of feministic measurement; today; their situations and dialogue are reflections of the tiresome grind that has become the average American workforce, a routine of artifice and pleasantries that mask an inner disgust for corporate politics. It is one of those rare movies that goes beyond judgment because of how accurately it forecasts the nihilism in our collective professional morale.

Imagine the daunting risk of making a movie about such scenarios without the dependability of established comedians. In a relatively sizable gamble, Higgins assembled his endeavor out of actors that had only rarely undertaken the task of movie comedy, and one of them, Dolly Parton, was a complete novice to standing in front of the camera. What was the draw beyond having recognizable names on the credits list? There must have been a certain chemistry that they brought amongst one another in off-screen interactions that gave them such a notable edge – one that propels everything we see even now. “Nine to Five” creates fairly consistent laughs, yes, but they are given merit not just because they are familiar to our experience, but because we accept and identify with the characters, who are played robustly by people that connect shrewdly with the material, and chew on it with the same sort of rigorous brilliance of some of the great movie comics of that time.

Chief among those assets is Lily Tomlin, the most senior secretary in an office of passive middle-aged typists. She is a loyal employee to Consolidated, an upscale business in Chicago, and her professional life is stagnated; awaiting a promotion that will likely never come, her routine involves checking up on employees, deflecting nosy supervisors and occasionally fetching coffee for her arrogant boss, usually while rolling her eyes or retorting with aggressive courtesies (she did train him, after all). In the early scenes, she is assigned to show the ropes to Judy Bernly (Jane Fonda), a new hire with no job experience that takes an instant liking to her brash approach, perhaps because it is a fitting contrast to her own clumsiness and insecurity (she recently just came off a divorce). Their common bond, inevitably, becomes their dislike for the company’s vice president Franklin Hart (Dabney Coleman), who embodies all the qualities of the most detestable of corporate mouthpieces and takes credit for the ideas of others, usually to their faces.

While they passively acknowledge the reality of their situation with the necessity to keep the job, Hart’s private secretary, the buxom Doralee (Parton), attempts to approach the matter with more lighthearted sensibilities. One gathers that such impulses must just come naturally to her, especially given how ravenous Hart’s sexual advances are; when he sets her up to bend over in compromising positions so that he can catch a view of her plunging neckline, her casual retort is one of acknowledgment but humorous acceptance. Nonetheless, even the most loyal and lighthearted souls have their breaking points, and just as her two co-workers have reached the end of their own ropes, she joins their ranks in a round of elaborate daydreaming that culminates in a trio of murderous fantasies, and the start of a new dangerous game between them and their corrupt boss that escalates into something of convoluted zaniness.

The weight of the situations is key in propelling many of the important laughs (especially in the last half), but they would mean nothing in any context without the assuredness of the stars. Tomlin, so consistently firm in her conviction, is not just reciting words or reacting by the demands of a director or a screenplay – there is a genuine connection to the material that propels her performance and gives it a genuine edge. Simultaneous to that, Fonda, a more methodical thespian, has great fun in playing against her accepted type, and there are moments where she is so ingrained in the embarrassment of daily situations that her reactions are as priceless as they are sympathetic (a later scene in which she goes upstairs in a mansion to make sure Hart is tied up results in one of the more memorable reaction shots). And though Parton is no elaborate curator of emotional responses, her mere presence carries its own gravity. She is confident, infectious, and joyous to watch despite the superfluous nature of her existence; just to sense her is to be enraptured by her ability to possess our attention.

Combined, the three women possess a level of chemistry that gives the movie an added level of comical awareness. The most precious scenes are not even isolated interactions with Hart, nor are they the ones that involve the obligatory screwball elements; the most resonating, I think, involve them collectively talking and plotting against their terrible boss. Many of those are so ingrained into us that they can virtually be recited from memory; the greatest, involving a round table discussion of experiences with firing a gun all while the ladies are passing around a joint, comes to mind as easily as it continues to garner smirks. Conventional wisdom suggests that this particular setup was passed down by the “Cheech and Chong” films, but there is a certain straightforward accessibility in this depiction that allows it to stand apart from the more direct inspiration. Being high as a kite and engaging in flamboyant discussions is a staple of any buddy-oriented comedy these days, but they are only as effective as their delivery, and greater ones should not have to consistently call attention to the context.

Much of “Nine to Five” exists in resistance to that trend. The material is so natural, so lighthearted and so succinct that it isn’t so much written as it is impulsively devised from an awareness of principles. The screenplay by Higgins and Patricia Resnick supplies good measures to suggest as much; it creates broad strokes and general details without necessarily overloading the audience on them. That supplies the actors with countless golden opportunities to do something stimulating with the material. Dabney Coleman, who plays the antagonistic boss (a “sexist egotistical lying hypocritical bigot,” the famous saying goes), has perhaps the most fun with this opportunity, and whether he is caught in plot predicaments that are in his favor or against it, he works his way through the dialogue – and the interactions with the three women – with a sly wink. Was Higgins just as cognizant about the necessity of his casting as he was his three actresses? One must often wonder. The rarity of any film is to combine the forces of a team of players into a singular goal, but how in the world did these four specific people, all from such opposing walks of life, manage to come together and make such effective strides with this story? The uncertainty of an answer may be part of what draws us continuously to the movie, so long after it was just another Hollywood comedy showing at nationwide matinees.

The poetic irony here is that the ideas, once relevant because of the attitude of the audience, are more prevalent in today’s professional climate. As the economy ebbs and flows and workforces are downsized and broadened in a variety of industries, people become motivated to hold onto what they got, and often dictate their attitudes for some level of work-related security. The Franklin Hart types are frequently made from this mold, and there is a desire in many of us to detest the actions of such people, perhaps even fantasize about the clever and insane ways that we can remove them from being a nuisance to our daily routine. When one puts emphasis on these two details, is it any wonder that a movie as pure and incidental as “Nine to Five” still holds up so well now? The dog-eat-dog world of office employment makes monsters out of thinkers, and here remains a movie that reflects on that reality in enduring passages of wit, sarcasm, fantasy and all-around likability. Oh yeah, and a few well-timed performances as well.