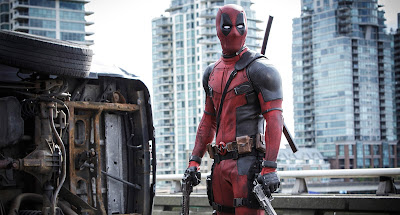 Wade Wilson may have been manufactured in a universe with few similarities to ours, but in a movie climate overrun by noble superheroes and domineering tyrants hell-bent on world destruction, his arrival could have not come at a more apropos time. A staunch practitioner of all things vulgar, he comes to be the lightning rod for which desensitized audiences can rest their cynicism on, occupying a space in his social culture that arms him with a scathing editorial analysis of all things loud, obnoxious and completely absurd. Such intentions are made known quite early on in the new movie about him; waiting for the arrival of a slew of enemies he is destined to slaughter, he narrates in sardonic oratory that breaks the proverbial fourth wall of movie awareness. Endeavors with less alert protagonists would hardly have the audacity to regard their destinies with some level of cheeky discernment, and yet here is a man whose life experiences – and colorful observations – work directly in favor of that proclivity. The funny thing about costume-wearing warriors is that the more abundant they become, the less likely they are to comment on how cliché their own origins might be.

If the arrival of “Deadpool” has become obligatory based on the rampant trend of comic book movie adaptations of the last five years, then Ryan Reynolds’ casting is, in many ways, just as inevitable. This is an actor who has been involved already twice in forays into such worlds – first as a sarcastic mercenary in “Blade: Trinity” and then a colorful wisecracker in “Green Lantern” – and has weathered the scars of box office failure enough to inform his context. What was his reaction when the filmmakers dropped this screenplay into his lap? Was it as if he was being offered a chance to redeem a career that seems trapped in a time slip of monotony? Listening to the dialogue, one has to wonder if the filmmakers gave him the license of improvisation. A mere character is not reciting many of these words; they are a snapshot of Reynolds’ distinctive comic panache, and roll off his tongue as if running commentary that could have been pulled from a behind the scenes documentary. There are countless precious moments when this becomes obvious, but my personal favorite occurs when Deadpool crosses paths with two X-Men who suggest that he follows them in order to “meet with the professor.” His response: “McAvoy or Stewart? These timelines are so confusing.”

It is precisely that degree of banter that carries us viewers, now weary of this formula, effectively through “Deadpool” without surrendering to conventional responses. We have a good time watching on, but not because it is at all rousing or enthusiastic as an action picture – no, our interest rests firmly on Reynolds, who creates a character with so much humorous flair that his words project a certain cheerful acceptance of a superhero’s fate. What’s most interesting about that scenario is how decidedly firm those standards are in both the present moments as well as those of the distant past; long before he was sentenced to death, scarred by government experimentation and given mutant healing capabilities, Wade Wilson was the same kind of hard-boiled motor-mouth, and certainly charismatic enough to hold his own in situations ranging from youthful intimidation to aggressive sexual practices. It’s easy to grow weary of movies like this when they opt to deliver the specifics of events out of chronology, but in this case it comes as a result of offering a characterization some level of firm insight. You would think that a show-boating wisecracker wouldn’t find much funny about the loss of a girl, his health and good looks, but hey, who’s to say we can assume what anyone is capable of in the face of violent change?

The conflict: Wade, a mercenary for hire (usually for inconsequential deeds), meets beautiful and feisty Vanessa (Morena Baccarin) and proceeds to engage in a wondrous relationship with her before he is given shocking news: stage 4 cancer is travelling fast through his body, effectively sentencing him to certain death. As she clings to a narrow morsel of hope for his recovery (usually in between searching for alternative treatment plans), he views his fate with a strange sense of cynicism; he knows his days are numbered but does not want to change Vanessa’s image of him, especially if he is destined to endure immense suffering and pain. As those realities trickle into their sphere of awareness, a strange figure dressed in government clothes wanders into his world to offer substantial glimmers of hope: with his cooperation, his agency could not only cure him of his fatal ailment, but also turn him into a valued military weapon capable of besting any odds he is up against. Despite a brief bout of skepticism, Wade agrees – because hey, if you’re already destined to die and planned to leave your girlfriend, there isn’t that much to lose anyway.

The scenario pulls him into a dark and turbulent world of science experiments where patients are strapped to gurneys like slabs of meat and moved around to be prodded like squealing pin cushions. At the head of this experiment is Ajax (Ed Skrein), a stone-faced brute whose British accent and sharp quips are instant invites for Wade’s biting retorts. Inevitably this leads to a series of scenes where the villain attempts to bring out mutant chromosomes by exposing his subject to various experiments designed to heighten his senses – some of them painful, others cruel and sadistic – and when one of them comes to alter the structure of Wade’s skin cells, it inspires a moment of rebellion that leads to him breaking free from his medical prison (and right into a scene in which he fights his oppressor completely nude while the lab around them has burst into flames). His mission from that moment on becomes single-minded: he will track down Ajax and force him to correct his disfiguring appearance, even though the results have given him a healing factor that allows him to – quite literally – grow back severed limbs and repair bullet wounds with minimal fuss (although the jury is still out if super healing capabilities can assist in fixing very bad skin conditions, unfortunately).

As this arc ebbs to and fro through an arsenal of graphic chase sequences and incessant violence, Reynolds does an interesting thing with his performance: he plays it wryly while blurring the boundaries of his screenplay with the insight of weary moviegoers, which assists in taking a certain edge off of the excessive blood and gore (one wonders if, perhaps, he studied Tarantino’s sensibilities as homework). The screenplay by Rhett Reese and Paul Wernick gives him ample opportunities to play with the fourth wall of this story, which is sound; it allows him to connect with the sentiments of his audience and dismiss the common threads running through the plot, which have become just as predictable as they are obligatory. Likewise, even though much of what he goes through is clearly in the vein of lurid fantasy, he accepts the rules as easily as he must spit at them, and there are some precious moments where the dialogue is completely on-point with the eccentric nature of the situation. Would this sort of character have fit in with any of Marvel’s more conventional hit-makers? That is doubtful. But this is a movie and character that know exactly where they belong, and have no interest in competing for the driver’s seat of exhilarating action when they have carved out a distinctive niche in a universe starved for more distinctive perspectives.

Given the dexterity of these ideas, one could almost assume that “Deadpool” would be the kind of movie eager to take us all the way into strange new narrative territory; like “Ant-Man” it has the desire to build on the possibilities of an offbeat hero, and like “Guardians of the Galaxy” it involves players who are cut from a cloth completely different than those like Iron Man or Captain America. Yet the movie, even with all its witty wisdom and delightful verbal connotations, seems stuck on screenplay autopilot; the story is essentially just a prop to elevate Deadpool’s savage critiques and punchlines, and the minor characters barely do the service of filling in the edges without being of any noteworthy consequence (the villain, as an example, is a complete waste of the story’s obligations).

The climax is a display of gargantuan ambition, to be fair, but it is staged so awkwardly that one gets the sense it doesn’t even need to be there; clearly the writers could have gotten just as much effect out of Reynolds while watching him exchange one-liners in the corridors of an abandoned factory or something. I suppose when it comes time to split hairs, not many will mind. Audiences will be showing up here not for a rewarding outcome or an enthusiastic payoff; they are there because they want to bathe in the risqué values of their R-rated hero, whose devious intentions are clear even when the story surrounding him isn’t as ready to take the full descent. On those terms, “Deadpool” is exactly the movie you expect out of this character, and, well, how awesome is that?