The Wild Parrots of Telegraph Hill (2003) 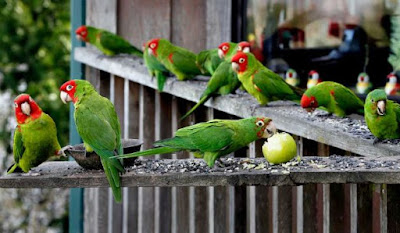 The rhetoric of commoners would have you believe that animals only occupy the personalities we attach to them, but more perceptive minds know better: they can sense the gears of attitude lurking underneath a trajectory of common instincts and silent routines. Part of what attracts us to such creatures – be they pets or otherwise – is that they know how to hold their own in a world of conventional disinterest, often catching our notice by acting in such a way that is indicative of some kind of internal spark. Sometimes that comes in the form of relentless affections, other times strength or defiance. The constant is that there is a necessity in them to be noticed, especially if it relates to their very survival or comfort. How perceptive they must be to have so thoroughly sharpened their associations with human beings over the centuries, especially as it has been instrumental to their endurance in a world that continues to offer new dangers at every given moment.

One of the key observations made in “The Wild Parrots of Telegraph Hill” utilizes this philosophy tenfold: the birds are not so much feathered objects as they are a unit of empathetic lives that fill us with stories of survival and individualism. They have come to notice of others not entirely because of that distinction, however. Flying the skies above San Francisco and nestling in the trees below, they are parrots displaced from their native South America, who have come to depend on the kindness of fascinated onlookers to thrive in a world filled with suburban predators. How did they get there? Citizens speak of a cluster of far-fetched theories, but the reality is probably much less glamorous: in all likelihood, some that were transported up north got out of captivity and repopulated, allowing the flock to grow to alarming numbers (and ultimately splinter off throughout the west coast).

Much of this is on the mind of Mark Bittner, a man who comes to regard himself as the guardian of the green and red conures, but his drive is less about situational empathy than it is sensing the calling of their distinctive personalities. Over the course of 83 minutes, only a fraction of the material really deals with the prospect of their odd location or biology; to Mark, they are like extensions of a little family he has come to depend on for company, supplying many of them with names and stories that are used to propel his initiative as their stalwart caretaker. In some instances, that translates to touching little vignettes emphasizing their bond. In one example we are introduced to Mingus, a feisty little bird that moved indoors and then refused to leave, and in another are offered a painful memory about the tragic death of an old female, who lost all mobility before crawling into the crevice of a bedroom heater to die in Mark’s bedroom.

Among all these parrots, however, sits the patient figure of Connor, a conure with blue feathers who has been with the flock longer than any other; without a mate and suspicious of more casual interactions, he assigns himself to the role of protector of the injured, suggesting a past of individual traumas. If there is one interaction among them that Mark looks at as his proverbial anchor, it belongs to him, and there is a scene early on where they exchange an interaction that can be seen as an exchange of respect and commonality. Perhaps they bond because they both see themselves as loners; Connor is the only blue conure left in the trees, and Mark is a nomad with no prospects of professional or personal growth who lives in a small cottage on the verge of destruction. In a way that creates an underlying competition between both to see who can find love and stability first, at least apart from one another. But is there anything to offer to the world when they have become so alien to the grind and have nothing to offer other than mutual nurturing?

Not many documentaries about animals care all that much about their subjects – at least beyond the appreciation of their biology or survivalist tendencies – but “The Wild Parrots of Telegraph Hill” is so much more than just an informative excursion through the strange existence of birds in the big city. Produced and directed by Judy Irving, it is a gentle document about the romanticism between a man and his wild pets, all of whom depend on his good nature to persist in a strange cycle of existence among the threatening neighborhoods of San Francisco. The irony in that distinction is how foreign a possibility it all seemed to be for Mark. Once upon a time, he wasn’t even fond of the avian ecosystem. But what gave him the incentive to look towards them from less cynical eyes and become so loyal in his conviction? It is easy to assume that time and patience melted those barriers, and the stories were attached to the parrots as a way of keeping himself involved in their safety. But I don’t think it’s as simple as that, especially given how easily swayed those of us in the audience become. If we are dealing with a flock of birds from a respectable distance to offer mere appreciation, that’s one thing, but it is clear early on why both Mark and the camera gravitate so closely to the birds: because they aren’t so much existing as they are demanding our notice through a menagerie of distinctive impulses and charming behavioral patterns.

What that leads us to is a resolution that isn’t so much a delivery of facts as it is a projection of our sudden attachment to these creatures, many of whom become recognizable based on personality distinctions rather than just given names or physical traits. Like characters in an engrossing story, they come to occupy a space in our minds that we reserve for special bonds, and the destinies they are met with – some tragic and some triumphant – carry a very real emotional undercurrent to them. What becomes of Connor, the poor bird who loves none but guards the sick and dying? What of Mingus, the parrot who wants to be domesticated but must face the reality that Mark might not be able to take care of him for much longer? When we find ourselves asking such questions in a documentary, I believe there is a moment where the genre begins to transcend the notions of delivering mere information. “The Wild Parrots of Telegraph Hill” certainly arms itself with enough, but like its director and narrator, it is a movie that sees past the inevitability of these intertwining fates and discovers something profound about its subjects: namely, that there is so much more to them than just mechanical exteriors and exuberant feather patterns.

Produced and Directed by Judy Irving