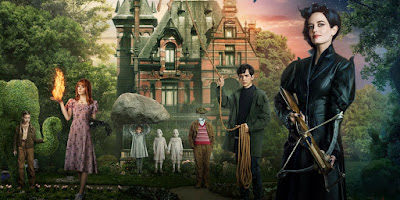 “Miss Peregrine’s Home for Peculiar Children” is not the sort of excursion that is alien to the behaviors of the eccentric Tim Burton, but unlike a plethora of the director’s recent output it sticks to you with a certain romanticized clarity, as if plucked from some untapped corner of his exhausted imagination. Some credit can be attributed to sharpness of the visuals and even the dexterity of the characterizations, sure, but the most certain of its qualities rests in the writing; based on a popular young adult novel by Ransom Riggs, here is a story tailor-made for the sensibilities of a dreamer, enriched by a consistency in the details that leave their viewers fascinated, shocked and at times enamored. Yet even enthusiasts of the Burton doctrine might find themselves bewildered enough in those realities to stand back in charmed perplexity – as much as they are likely to be thankful the opportunity to be once again swept up in a rewarding adventure, some will be inclined to attach footnotes. A filmmaker this gifted and this pointed in his observations is too precious a gift to be a slave to formula, and yet “Peregrine” represents a departure from that trend rather than the persistence of his individualism.

How did the audience develop that cynicism? Our reservations belong to what Pauline Kael once referred to as the “burden of disgust,” which argues that one’s knowledge of a subject can bend us toward the trend of harder standards and easier dismissals. A quick jaunt through the catalog of the famous filmmaker more than suggests synchronicity with that worldview, although there have been exceptions – though both his “Alice in Wonderland” and “Sweeney Todd” earned accolades from the general public, neither could be regarded in the same way as many of his earliest successes (“Batman,” “Beetlejuice” and “Edward Scissorhands,” for instance). Sometimes the reality of the quirkier artists is that they unconsciously contradict the underlying wisdom of their stories, especially as they age. How else, for instance, is one to surmise the flavorless quality of “Charlie and the Chocolate Factory” when the same man was once capable of making the astounding “Ed Wood,” in itself the funniest and most resonant of his early pictures?

For many, a journey into the strange time loop of Miss Peregrine’s house will represent a bittersweet return to that tradition. The film stars Asa Butterfield as Jake, a shy teenage boy whose inquisitive eyes are stirred by years of absurd stories fashioned by his grandfather Abe (Terrence Stamp). While a youth of belief made him the target of relentless taunting and bullying by school peers, his conviction remained forever in the favor of his greatest relative, who is seen in the early scenes going into a strange panic before being discovered dead in the trees just beyond his backyard. What killed him? Authorities – and even his own son, Jake’s father – believe he simply wandered out there and died of a heart attack, but the grandson suspects something amiss. When he spies the presence of a menacing figure with white eyes on the same night of Abe’s death, it becomes the dependable foreshadowing that propels his interest in unravelling a certain mystery.

At the tip of that puzzle is a trek to an orphanage on a remote Welsh island, the apparent site of Abe’s earliest stories. Its significance is played up by a postcard discovered among the deceased grandfather’s findings, signed by a Miss Peregrine (Eva Green), who beckons Abe back home for enigmatic reasons. But how could she, really, given that Jake discovers the orphanage and its inhabitants were apparently obliterated during a raid bombing during World War II? Among the ruins is an even stranger detail: when Jake walks through their corridors, he quite literally wanders right into a time loop of the past, where Peregrine and her “peculiar” children are still alive and functioning, and happy to engage with Abe’s charming grandson. There is a degree of mythology associated with that detail that Burton plays up wisely, and as the movie’s primary villains threaten the safety of the children and their selfless caretaker, these “time loops” are utilized with clever implications as characters bounce between them in an attempt to preserve their closed worlds.

The plot moves strategically through this maze on the shoulders of two destined romantic parties: Jake, skillfully portrayed by Butterfield, and Emma, played by the charming Ella Purnell. She is an air spirit whose skills involve appearing weightless, like a balloon overfilled with helium, and there is a scene where the visuals emphasize her abilities by having her breathe a massive air curtain into the chambers of a sunken shipwreck. The talents of others, meanwhile, play into all of the familiar Burton touches: a child whose neck contains monstrous teeth, twins covered by masks (apparently concealing faces too horrific for a movie camera), a girl who has superhuman strength, another who always appears invisible (the running gag: sometimes he doesn’t even bother with clothes), and a boy who projects his dreams as if they are home movies. What they exist in the time loop for is, of course, a dubious predicament for “peculiars,” whose gifts have also become the resources for a faction of feeders known as “Hallows,” who seek immortality. Without the loops, many of the young would be subject to discovery by these vengeful monsters, and Jake’s arrival apparently heralds a moment when the two factions are destined to clash – which may in fact explain why his grandfather’s death was preceded by the appearance of a haunting apparition (Samuel L. Jackson).

If I deliberately avoid painting all of the minor strokes of many of these themes, it’s because a movie review can barely articulate some of the precious secrets buried within. Like a treasure trove of novel touches, one is likely more eager to unlock the chest rather than have its spoils rationed out for them. And while Burton relies on many of his conventional proclivities to spin this yarn, some level of it remains incessantly fascinating; just when you think you have the plot framed out well enough to comprehend, a new detail comes along to inspire a few revisions. At times it also inspires rather pointed questions. How do the time loops work? What happens if one closes and the people within them are trapped in the modern day? How is Jake able to wander into one but not others? What I found most surprising about these conundrums is how seamlessly they are rationalized in the dialogue. Most pictures overloaded on logical uncertainties tend to call attention to the obvious and explain the essentials in a coarse fashion; here is one that allows us to pick them up as little morsels hidden in everyday conversation between eccentric youngsters.

The downside to this all, alas, is that Jane Goldman’s screenplay doesn’t give Burton nearly enough to work with in order to set up a climax, and the movie takes a rather steep nosedive in the final 20 minutes when it ought to be accelerating beyond the tempered pacing. One of the key locations for the obligatory clash of the peculiars and the hallows, for instance, involves a time loop inside of a carnival; the mere mention of that setting might have inspired many artists to reach for some level of audacity, but all we end up with is a series of long and dreary exchanges between a shallow villain and his nervous victims. To outside eyes the scenes would most closely resemble the early fighting sequences of the “X-Men” franchise, but at least those went somewhere with the novelty; here, Burton seems so content by the preceding material that he takes a hurried approach in the resolution, leaving us with the sense that we are cheated. What was the point of ending so abruptly? Would it have killed him or his visual effects artists to burrow a little further into some kind of adventurous fanfare? “Miss Peregrine’s Home for Peculiar Children” is so interesting a concept that it’s a shame the final moments play out so sluggishly, as if to imply that the studio ran over budget well before the revelatory moment was within grasp.