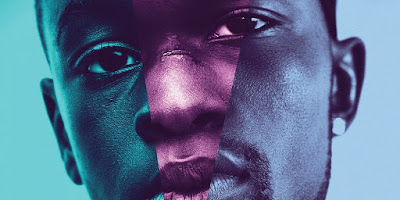 The two most important memories in Chiron’s life occur on a beach: one early on when a man acting as a parental figure teaches him how to swim, and one in adolescence when he shares a private encounter with a buddy from school. Both moments are catalysts that allow uncertain eyes to peer beyond the shadows and see a lost part of one’s identity, but observant members of the audience will sense their significance stretching beyond simple narrative agendas. Perhaps that is because their underlying intent is substantiated by the profound depth of writing, which tells the story of a sad introvert whose dueling personal distinctions make him an unwanted target of peer bullying. Perhaps it comes down to the riskiness of the ideas, in themselves a reach for any endeavor piercing the membrane of the mainstream. But it is the fact they exist at all in the walls of the same movie that persists as the undeniable force of wonder. The heartbreaking candor at work in Barry Jenkins’ rich character study amounts to some of the most effective dramatic intensity of the year – no question about that – yet rarely has such a story allowed these details to shape the surface so vividly, especially in the midst of a frontal confrontation with the harrowing prejudices that plague those within their own isolated worlds.

“Moonlight” is an audacious, emboldening injection into the fabric of the American consciousness, a film that will be remembered as a watershed among followers as the reality of modern film is carved into the walls of important history. Certainly grander statements have already been written in the months it has left wounds in the hearts of others, and those revelations are worth contemplating almost as much as the result itself. Think of the subject matter: here is a movie about a black child, raised in a ghetto, bullied and beaten, with only momentary role models who discovers through years of trauma that he may be gay. How many serious film writers could have predicted they would be moved by any of this, let alone identify with the plight endured by its protagonist? If the movies are indeed the engine that builds the empathy of the human experience, a great many cynics will walk away feeling as if they have been pointed in the direction of passion and optimism.

The long road to that epiphany is, however, paved in troublesome terrain. Split into chapters, the film shows Chiron in three specific stages of life: as “Little,” a very young boy, meandering through the foreboding streets of Miami; as a teenager caught in the trenches of sexual discovery and physical abuse in school; and as an adult, reinvented as “Black,” a man who hides potential feelings behind the rugged and dangerous façade society expects of him. The weight of these specific glimpses is found in moments that shape both the direction and the emotional evolution of their host, however tragically; some of the details have such clarity in them that one wonders how anyone – even someone as removed as he – can work through the fallout with such impassive expressions. One gathers this to be the sort of nature that has followed him around well before the movie opens, and when a grown man named Juan (Mahershala Ali) attempts to befriend him during one of many apparent chases from school bullies, there is at first no gratitude or intrigue: only a sense that something more menacing (or violent) is waiting for him around the corner.

Of course details gradually emerge to illuminate the scenarios, including glimpses into a home life with a mother (Naomie Harris) who is absent, cruel and driven by drugs and prostitution. “Moonlight” contrasts those certainties with brief glimmers of hope, such as a glorious scene when Juan takes Chiron into the ocean and shown how to swim; later, their silent bond is mirrored in the interactions shared with Teresa (Janell Monae), Juan’s girlfriend, who is destined to act as a surrogate mother figure as he passes through life. Disappointments dot the venture, certainly, but always they come at the service of taking the movie through resonant observations of the hero, whose soul has depth and charm even when the actions of others dwarf him to solitude. And when the moment comes when he and a childhood friend share a moment of intimacy on the sand in the dead of night, there is nothing forced or awkward about the encounter. To them, it is a powerful release that gives them much-needed tinges of joy, even if the worlds they live in are destined to persecute them for such.

Often in the movies, however, filmmakers have put distance between themselves and such realities. A great many pictures come and go while dealing with the lives of the oppressed, certainly, but few ever take on added distinctions; it is only a norm for the social structures of a story to reason with being gay or being black, rarely both at the same time. Some argue it is because one minority is rarely tolerant of another, but my pessimism considers that a superficial projection of the studio system, which is far more interested in keeping characters within the framework of non-threatening complacence. To those sorts a protagonist like Chiron is a challenge to even the broadest of their glitzy illusions – someone whose behavior comes at the expense of reducing a conventional interpretation to fodder, all while re-imagining the scope of what it means to be a man in this world with foreign qualities. The screenplay is adapted from a rather successful stage play, and like many other notable theater-to-big-screen translations over the years there is truth in the story that is only hard to swallow if one is unwilling to see beyond their own perceptions. Like the recent “Tangerine,” “Moonlight” is a mirror that must be gazed upon if anyone of us in the audience is to mature in our contemplation of those who are different.

Some could say this all sounds like a basic consideration of the material, but there’s far more going on here than can easily be communicated in description. Chiron may very well be one of the great screen identities of recent times – as rich as he is deep – and the three talented actors who portray him all bring a certain honesty to his existence, as if possessed by fragments of his moral psyche. The greatest of the three, perhaps, is Ashton Sanders, who portrays the teenage version; so precise is his portrayal that he seamlessly rides the waves of the current, from troubled gazes (when he is confronted by a mother who steals his money for drugs) to sly exchanges (the look he gives Kevin, his friend, after they have exchanged sexual impulses) to blank disdain (when he is the victim of a beating in front of a group of fellow students) and to outright rage (a key moment when he returns to school and acts out violently against his greatest aggressor). To most – and to the director – the formative years of high school are the most influential in shaping our discoveries, and Sanders subconsciously anticipates them in a portrayal that is utterly heartbreaking.

The last moment of the film did, initially, leave me with reservations. After Chiron becomes a successful drug dealer in Atlanta in his twenties, he is haunted by obligatory memories of his beach encounter… until Kevin, the other participant, initiates contact with him. The finale consists of a series of close dialogue exchanges – some friendly, others awkward, others still consisting of passionate gazes – and then an exchange that feels less like part of their reality and more like a dream sequence from some fairy tale ideology. What was Barry Jenkins’ point of it? My guess, if I had to make one, was that he was afraid of caving to the obvious impulse of relying on a release of sexual tension, as most movies usually do. Some will find it bravely restrained in that context, while others may feel it cheats the trajectory – and the deserved payoff – of the characters. After lengthy thought, I choose to look at is as a footnote, a risk that was at least worth making in a film already chock-full of challenging dramatic landscapes. However you choose to slice it, “Moonlight” possesses the purest form of joy that exists in filmmaking – the kind that reminds us of the power of identity when most are more focused on technical breakthroughs. It will be remembered long after others are left in the dust.

Thank you for this thoughtful analysis of MOONLIGHT, the best that I have read. In addition to the other fine qualities like the cinematography and the fine portrayals by everyone on the screen, the brilliance of the film, I think, lay in how the baton of Chiron's character was passed from actor to actor. I found the ending quite unsatisfying. "Cheating the trajectory", a perfect way to put it. Was Kevin in fact gay or simply a loving, caring person not afraid to be close to another man? Chiron certainly was gay. Was Chiron left in the lurch once again, unable to trust himself or others sufficiently to pursue the companionship of gay men, and instead having to rely on the loving embrace of a straight friend. Were both men still governed by internalized homophobia instilled by the black community and its notions of manhood? I felt that these questions and others were left incomplete. If Chiron could not find the love of another gay, that sad outcome is unbearable to think about given the "trajectory" of the narrative, the ordeal which the audience endured.