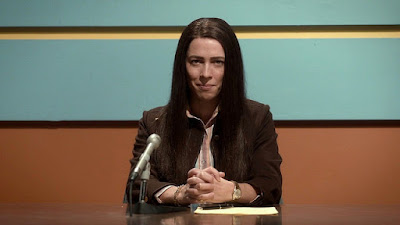 Though few now recall her sad story, Christine’s name still reverbs with a haunting echo to those fluent in any level of journalistic training. Hers was a situation that altered the possibility of the times: on a seemingly normal morning in July of 1974, she was delivering a morning news report on a local Florida television station when she pulled out a pistol and shot herself in the back of the head. The horror of that impulse, which ought to have eclipsed any possibility of context, instead became a footnote over time; to most who remember it, there is an inconclusive reasoning standing between them and their acknowledgment of paralyzing austerity. Paddy Chayevsky reached for those answers – albeit indirectly – in the form of biting satire in his screenplay for “Network,” about a man who threatens to blow his brains out on the evening news (some say the character was inspired by the Chubbuck case), but nearly four decades after a flurry of public debate her final act continues to linger in ambiguity. So rarely had mental illness overtaken one of its victims so publicly, or so tragically.

Chubbuck’s death is at the heart of the matter in not one but two recent films – this, a more straightforward account of her last days, and “Kate Plays Christine,” a pseudo-documentary about an actress attempting to understand the psyche she is destined to portray. Both films follow a pattern highlighting the blurred lines of public etiquette and behind-the-scenes tragedy, underscored most recently by renewed interest on film in the R. Budd Dwyer case (a Pennsylvania treasurer who committed suicide in front of live cameras). What parallels do they share beyond the puzzling framework of their shocking deeds? Both figures, perhaps, saw the cameras as weapons in their fragile lives – him being a victim of public controversy, and she a staunch critic of sensationalism. To most minds their deaths exist in protest of the mediums they loathed, paradoxically immortalizing their acts while turning the mirror back around on those hungry for the violence. Nowadays with the advent of the internet and the normalization of ghastly human atrocities, the final moments of Chubbuck and Dwyer must seem almost tame by comparison.

Director Antonio Campos does not exaggerate the finality of his subject. The movie is foremost a character study, set in the stark contrasts of 1970s décor and fashion. When Rebecca Hall first emerges as Christine, she is seen adlibbing a fantasy interview with Richard Nixon, certainly a prized subject for young reporters; it was the age of Watergate and the infamous David Foster interrogations had not yet materialized. But her ambitions rarely sync with the reality of her output, either. Fellow journalists – both in front of the camera and behind – see her as a thorn in the routine, a critic who is out of touch with modern momentum. She does not subscribe to the adage of ratings-driven reporting: “if it bleeds, it leads.” Often her features are about nothing of consequence, or at least seem to be designed for those whose interests are narrowly defined. Those realities are emphasized implicitly during a later passage when she goes in pursuit of a more “daring” story; using a police radio to show up on scene at a deadly fire, she covers none of the act itself and instead conducts a personality interview with the arsonist, whose own sadness seems more interesting to her than smoldering embers in the backdrop.

Something propels her towards a goal that seems to contradict her own professional feelings. The pressure is on amongst everyone in the newsroom to catch the attention of Bob Andersen (John Cullum), the station manager, who is said to be searching for someone to promote to a national syndicate up north. Christine covets that opportunity, but so does George (Michael C. Hall), her evening co-anchor; though they share dialogue that reflects a mutual respect (not to mention potential romantic feelings), it obscures the inevitability that they are competing for the same prize. For him the promotion would mean achieving a goal; for her, an escape from lingering melancholy and troubled times at home. This propels her underlying anxiety as it must (just as heated confrontations with her ambivalent mother and ill-tempered boss do), but by the time Christine is taxed with stacked failures, they become catalysts for something more menacing. A date with George ends, quite unexpectedly, in a group therapy session. Romantic inclinations are silenced. When the opportunity to move to Boston slips through her fingers, the clarity of her conviction is challenged, and there is a moment between she and her fiery supervisor that ends in a rather uncomfortable confrontation right there in the newsroom.

But the purpose of these scenes is not to lead to an outcome that we will recoil from in shock. Those details are well-known, perhaps even superfluous at this point. Certainly the director, known thus far for minor independent productions (“Simon Killer” and “Afterschool”), must cover them for the sake of framework, but it is far more important for him to establish a mood rather than a thought process. He sees the Chubbuck case from a place that obscures the rationale, no doubt, because no one will ever find one. Hers is a legend where the final act comes at the end of a journey impossible to resolve or find closure with. But what takes any victim of suicide to that moment is not unfamiliar: it is a feeling, a sense, that the hopes and aspirations of an individual face impossible obstacles, and no other solutions seem within reach. If the act of suicide itself comes out of a desperation, then it is never in doubt that Chubbuck’s is quietly tormented up to the point of the trigger being pulled. And so removed are her peers during that moment that at first they don’t even believe it is really happening, as if to assume Christine is capable of staging an elaborate prank in protest of her station’s agenda.

The guts of the movie are anchored in performances. Hall, normally light and calculated, virtually disappears into the role of the suffering Chubbuck, and what she does with the muscles in her face is nothing short of extraordinary – it creates, almost effortlessly, a scowl of disgust that seems to counterbalance her innocuous platitudes. One does not have to read too far between the lines to sense that this is a woman slowly withdrawing into the dark corners of her own mind. Likewise, young Maria Dizzia does an extraordinary job as Jean, a woman who is always watching even when others can scarcely notice the compassion flowing behind her focused eyes. The movie’s saddest moment comes after Christine’s unfortunate act, when Jean returns home and must face a life having been scarred by what has transpired. Earlier dialogue foreshadows this resolution, of course, but not the sincerity of it. What hell it must be enduring the years as the unfortunate eyewitness, always wondering if something different could have been done to change the outcome.