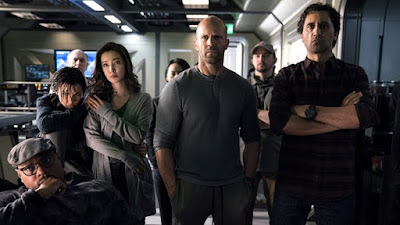 No shortage of dismissive adjectives come to mind when contemplating this, one of the most lightweight shark movies of recent memory. It tells the story of how an excursion to explore the Mariana trench inadvertently leads to the release of a slumbering giant, who has somehow managed to survive under 11000 meters of water pressure for well over a million years without undergoing any evolutionary changes. As it rises towards the surface, it sets course for the same curious sorts who gave it passage to the open seas, and its most revealing moment on screen comes when it stops to observe a little girl wandering through the underwater corridors, where they briefly stare at one another before he takes a bite of the enormous glass panel. She lets out a shriek that alerts others of its danger, but who cares? In a film where a shark’s bite radius could literally swallow a ship whole, would any of the would-be victims really know they are being eaten long enough to let out the obligatory scream?

Something about the ravenous monsters of the ocean continues to attract modern moviegoers. Think back over the last four decades of summer blockbusters and marvel over the seemingly endless supply of pictures where sharks have become the primary antagonists; four “Jaws” films eventually lead to “Deep Blue Sea,” then “Open Water” and then, more recently, “The Shallows” and “47 Meters Down.” Some of them have their merits, and even fewer transcend the shock factor of their gimmick, but in almost all instances they are crippled by a late realization in the characters: they are seldom as interesting as their bloodthirsty predators. But now we are in a time when the aquatic dinosaur of “Jurassic World” has cast an even more dubious shadow, where rows of teeth mean little in the context of something being far bigger and nastier than anything seen before. That leads us to the beast in “The Meg”: a shark known as the Megalodon, thought to be extinct for millions of years, that measures nearly four times the size of the average great white. Ordinary onlookers might be paralyzed by awe or fear when they realize they allowed a slumbering giant to escape its hidden prison, but those in this film seem unburdened by shock. Is it because they can hardly believe it themselves, or have they too seen enough shark movies to care about the dangers?

The movie is a long and absurd exercise in kitsch, without any high aims and even fewer incentives to inspire more than a passive glance. Sometimes it holds our attention, however briefly; a moment during an early encounter provides a notable jump scare, and again later when the oceanographers discuss whether they accidentally unleashed more than one predator from their foolish excursion. Their dilemma, unfortunately, is that they function only as footnotes in a screenplay where all their dialogue is reduced to arbitrary exchanges and clichés. Take the Statham character, for example – after exiling himself to the islands after being forced to leave behind two of his close friends in a dangerous deep-sea rescue mission, he is visited by colleagues who hope to lure him back, and his perfunctory response touches on all the obvious cues (“You're going to tell me your story and I'm going to say no. You're going to offer me money and I'm going to say no. You're going to try to appeal to my better nature and I'm still going to say no because I don't have one.”).

But wait, there’s more. Once they crew realizes their discovery (or mistake, depending on who you ask), they argue all the conventional points about what approach to take. Many, of course, know it must be destroyed. A scientist (Winston Chao) wants to keep it alive to study it (“man doesn’t have to destroy everything,” he argues). A dangerous encounter ensues in which Jonas (Statham) must plant a tracker on the shark while he is swimming nearby, then be pulled out of the water to prevent the beast from eating him. That gives way to another agenda: injecting the megalodon with a tranquilizer that will ultimately kill it. But how do you know just how much to give him when his size far exceeds that of any known living sea creature? The experts have assumptions but no certainties, leading to an even bigger question: how exactly did any of them graduate in their field of study if every plan is theoretical or lacks certainty?

The movie goes on and on and on with this predicament to the point of exhaustion, sometimes pausing long enough to show the key characters in various states of fright as the shark outsmarts them, attacks their boat and, of course, picks them off one-by-one like waterlogged appetizers. The two who are spared the longest are Jonas and Suyin (Bingbing Li), the daughter of the lead scientist, who functions as the hero’s obligatory love interest (although their attraction is never consummated, perhaps because that would have risked the film’s PG-13 rating). But to watch them at any point on screen is not to involve oneself in any sort of human interest. These are slabs of meat making bad puns, not intelligent people who are trying to survive against a menace. The shark, meanwhile, is almost always observed as a blob dashing across the frame to obscure its details, perhaps because they aren’t exactly convincing. The giveaway is a scene that takes place on a beach populated by eager swimmers, who are driven to hysterics in one instance when they realize there is a gigantic beast swimming beneath their feet; in one shot the shark literally comes towards the camera frame, stops, and then turns around to follow a noise off in the distance. Here we see the total sum of special effects artists who lack a precise vision: the shark looks like a cartoon, and it moves far too fast for its size.

Will any of this matter to those who go and see it? Of course not. “The Meg” is the embodiment of the B-movie culture, uninterested in tapping into science or thought as its primary values. Its problem, alas, is that it’s not very interesting as a thrill ride either. Part of that could be because the director, Jon Turteltaub, is a man more interested in flash than suspense, and he never pauses long enough to build a sense of dread. Part of that could be because the actors, slogging their way through this material, seem motivated by dollar signs rather than having fun with what they are given. And maybe its because the shark, as ordinary a device as any other villain in most creature features, simply does not make for very interesting a threat anymore, no matter how large or impossible. There is a moment where Jonas mutters the words “Just keep swimming” as he approaches the massive jaws of the shark, perhaps to detract himself from chickening out. Some of us prefer to assume he is thinking about the same dialogue contained in “Finding Nemo,” and whether he would feel more productive walking out of this production to go home and watch that one instead.