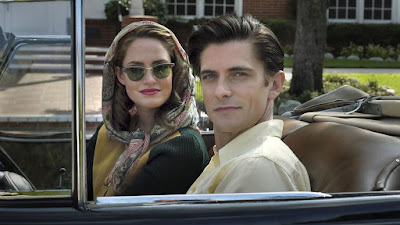 For nearly the entirety of its running time I simply sat there, shocked by what I saw, dumbfounded that any idea like this could carry any sense of intrigue for the hundreds of moviegoers that showed up to take the images in. Were they coming because it is, after all, based on true events? Had they been inspired by the notion of learning about the later years of Louis Zamperini, an Olympic runner who gave up his athletic aspirations to join the warfront after Pearl Harbor? Or how he would deal with emotional scars following years of physical and mental abuse? Whatever goals exist for curious onlookers, few leave the experience feeling anything other than betrayal and resentment. That’s because the movie is an arrogant ploy to reduce the human experience to one of submissive ambivalence, where science and medicine seem to exist as fringe exercises lacking the grandiose healing powers of religious devotion. To say that it roused me to loathing is understating the obvious.

Consider this premise. A flash of newspaper clippings and archive footage sum up the foundation over the opening credits: Louis Zamperini (Samuel Hunt), one of the great competitors on the track in the 1936 Olympics, has been called to arms in the war over the Atlantic, where he narrowly escapes death on the open water by being captured, imprisoned and tortured by Japanese war criminals (his primary antagonist is Watanabe, better known as “The Bird” in some historical circles). After being presumed dead, he returns home to the loving arms of his Italian-American family, who hover over him like superiors of a protective lion’s pride; barely a sigh or gesture escapes his reserved demeanor before someone arrives to offer the obligatory concerns. Unfortunately, they see very little of what really assaults Louis’ mind. He has constant nightmares about his recent experiences. Sometimes they bleed over into reality. Objects or events trigger a déjà vu that leads to heated outbursts, and soon he is drowning his silent traumas at the bottom of a bottle of whiskey – much to the dismay of his sergeant, who advises him to take three weeks of vacation in Florida after he inadvertently sabotages a gathering promoting the sale of war bonds.

While soaking up the sun he meets Cynthia (Merritt Patterson), a lovely and charming woman who, over the course of his brief sabbatical, advances from being a casual acquaintance to a passionate lover and fiancée (the movie makes all these leaps in roughly five minutes worth of scenes, no less). After they return home, Louis faces the inevitable curse of American veterans as he attempts to reenter the workforce, dismayed that lacking a thorough education means his chances of getting a decent job are diminished. Then he gets the idea of training for the next Olympics, and Cynthia coaches him through a strict daily curriculum of exercises that ultimately end with a crippling ankle injury; afterwards, he is told he will never compete again. All of this comes to a head just as his wife announces they will have a child, which only displaces the demons temporarily; after her birth and repeated visits to a hospital psychiatrist, booze becomes the only gratifying outlet to his growing sense of instability.

If all this murk and pomp plays like your standard checklist of morose undertones, it’s because Cronk conveys it as such. The movie is front-loaded with conflict and desperation. This is a ruse, we learn, to inspire a series of more uplifting scenes that must come later, as the Zamperini marriage is tested by alcoholism, poverty, vague possibilities of abuse, familial alienation, lurid daydreams and even emotional breakdowns. The screenplay by Richard Friedenberg and Ken Hixon rarely bothers with transitory behavior, however; it simply creates scenarios to push the melodrama through like a crank grinding out impurities in these cloistered lives. All the psychology, meanwhile, has been ripped away from the foundation; here is a family that is not so much facing serious issues as they are marching to the beat of a one-note orchestration. And then it all climaxes in a series of appallingly simplistic scenes: a shattered man is brought to church by his wife, nearly leaves, has a religious experience, then rushes home to dump all his hidden bottles of booze down the kitchen sink before turning to her and announcing these revelatory words: “he kept me alive!”

For the sake of objectivity, let’s assume this is, indeed the entire framework of Zamperini’s personal enlightenment. Why does the film deal with it in such a detached manor? It is all spiritual slapdash, without any of the plausible meditation to go with it. A more serious film would pause, contemplate, allow its characters to deal with the issues around them in thorough dialogue or quiet contemplation. But everything contained here is perfunctory, entirely in the service of a story that sees Christian faith as the only absolute, and must arrive there very rapidly to satisfy a short running time. We are used to seeing this sort of scope from this filmmaker, who also made the bad film “God’s Not Dead,” but rarely are the exchanges this crude, this awkward or this anti-intellectual. I have seen whole episodes of sitcoms that have thought about life complexity more than anyone standing behind the camera of this charade.

What of the people on screen? God love them, they give it their all. Samuel Hunt, thus far a man of television credits, is charming and handsome enough, and even embodies the man he portrays with close physical proximity. Merrit Patterson has presence as a supportive wife, and there are scenes where her blunt honesty seems sourced from a heartfelt realization. But here they are trapped in a masquerade of deceitful morality, where every word, every gesture or act of conduct is in the service of a distorted indoctrination. For the 98 unending minutes that “Unbroken: Path to Redemption” occupied me, I felt a sadness that I had rarely experienced: one where years of knowledge and personal growth was dismantled by the condescending advice of phony evangelists, who would go on to insist that all the pain and suffering we endure could be avoided by simply saying a prayer. Those are the sorts of idiots who have no business being around the movies, much less making them.