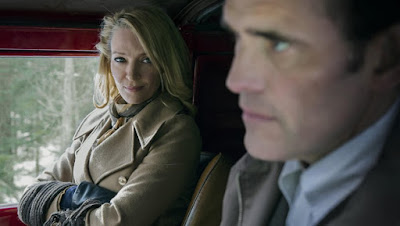 How do you engage with a movie, then, that shows such blatant disregard for the considerations of the audience? The trick is keeping pace with the framework. Throughout “The House That Jack Built,” a madman is seen partaking in the murder and mutilation of innocents like a predator at a noon feast. Almost nothing is left to the imagination. But in between killings and mutilations are verbal rationalizations that underline the violence with startling clarity. Think of Bret Easton Ellis if he were possessed by Gore Vidal. And as the movie moves further into this hysteria, becoming increasingly nasty and nihilistic with each passing scene, the narration becomes the crutch we cling to as a barrier between our patience and disgust. It creates a fascinating dichotomy. That von Trier presents the dialogue as a by-play between his character and an off-screen dissenter played by Bruno Ganz is telling – it indicates he also anticipates the retort of the viewer and has gone to great lengths to neutralize an impending sting.

The real von Trier is hardly homicidal, although he has been cited as one of the most difficult tyrants in the business – close enough, some would argue. When the Icelandic songstress Bjork famously accused him of sexual and emotional abuse on the set of “Dancer in the Dark” – right at the onset of the #MeToo movement, no less – there were few ripples; many could hardly put it past him. Others, including Nicole Kidman, have painted a portrait of a man who blends his dark sense of humor with almost threatening authority (a radio interview promoting “Dogville” contained an anecdote that suggested he would get drunk and reduce her to tears with verbal abuse every night after a long day of shooting). In some respects that gains him great admiration from frequent collaborators, who have repeatedly defended his nature as essential to the meaning of the work, but either approach underscores precisely what influences the actions within “The House that Jack Built.” Replace the concept of murder with filmmaking and what you have is an image of a man who revels in the obscene, sometimes well beyond the boundaries of ordinary human function.

For the purpose of Jack, he rationalizes this prospect with philosophical intricacy. “I believe,” he indicates in an early voice-over, “Heaven and Hell are one and the same. The soul belongs to Heaven and the body to Hell.” This precedes an announcement that his “career” can be summed up in five specific incidents, each seemingly more grotesque than the last. The first occurs almost without plan: driving a red van through a wilderness, Jack stumbles upon a stranded woman (Uma Thurman) with a flat tire. Her jack is busted. An awkward verbal exchange certifies their fates: almost against his wishes, she manages to persuade him to transport her to a garage in town, back to the site of her car, and then back again after her attempts at changing the tire prove to be fruitless. Their interactions in the van provide heavy-handed foreshadowing, including a discussion about strangers with vans being potential serial killers. Yet there is little to suggest Jack will come to verify these impulses. He remains alarmingly patient and disinterested in the potential prey in front of him – that is, until she stops dancing around the point and comes right out to insult him. What the whole sequence suggests, I suppose, is that victims to their killers are rarely taken as innocent bystanders – somehow, they have instigated a deep hatred within them that warrants a violent punishment. They are no more blameless than they are immortal.

There are more than just five killings in the film, although some are incidental to the more premeditated measures. One of their common bonds is the relative assurance of their perpetrator: an intellectual with grotesque delusions, Jack works in motion with an impulse that does not anticipate consequence or challenge. The second incident provides him with a chance to test these thoughts. After he has successfully murdered a woman after talking himself into her farmhouse, he attempts to smuggle her body out of the crime scene in his van while a cop is snooping around the neighborhood, who is there to answer a call about a break-in. But what proceeds is a clever confrontation between the officer and Jack that has an audacious edge of intellectual masochism, as if he is getting off at the prospect of nearly being caught. But then it is followed by a swift getaway in which the woman’s body is dragged behind the van all the way to his lair, where he reveals how much damage the face endured after scraping the pavement. Any ordinary scenario would be a slam dunk for forensic experts on the hunt for a missing person; here, Jack boasts about rainfall washing away the trail of blood, as if fate has destined him to always get away with what has become his macabre hobby.

The contrasting argument, you can say, is that a film in which a killer always gets away with his crimes has little to no value as a thriller. But the movie isn’t obsessed with those sorts of motives. It is a meditation on the psyche of controlling, dangerous men – a distinction that von Trier certainly places himself among. Like his antagonist, he too has walked away from the smoldering embers of his accomplishments as if empowered by their fallout, and that audacity has only propelled his need to push the moral boundaries further. As “Breaking the Waves” led to “Dogville,” so has “Antichrist” – his most divisive film – led to this one. They contain the mark of a man who is in ecstasy of the subversive, and his camera plays like a straight razor slicing through the flesh of ordinary themes. But why use the act of killing as the connecting metaphor? It goes to emphasize, I suspect, his idolization of mass murderers. When he famously praised Hitler during a press conference at Cannes years prior, he opened a portal of insight into his austere philosophies – that is, a recognition that all his work, up to that point, stemmed from a desire to compare himself to minds with devastating agendas. Some could say that has taken the form of outright misogyny; most of the victims in his films are usually female, and their grief is rarely as harsh as the mutilations they endure (sometimes self-inflicted). The dissenting body will look to “The House that Jack Built” and see more of the same: unsurprised that many of the key centerpieces of Jack’s “incidents” are female, children and minorities. It contains all that we can use against him, while at the same time featuring everything that has cemented his remarkable notoriety.

Two sequences in the film are an ordeal to endure. The first occurs in the aftermath of the third murder, in which he takes the corpse of a child, usually seen in a morose state in life, and performs taxidermy on the remains – because, he reminds us, it’s no fun to be surrounded by people who look disappointed even in death. The climactic reveal is so extreme and excessive, few know how to respond. But then it is upstaged in the following event after Jack, having won the affections of a beautiful blond, restraints her before using a knife to saw through her breast… and then has the audacity to deliver that breast to the hood of a police car parked on the street below. In both cases, the audience is seemingly being demanded to choose a position – whether they are ok with the director’s methods or if he can push them below the brink of acceptable aesthetic. During the screening I attended in Portland, three people walked out during the film – one during the taxidermy scene and two others following the severing of the breast – as declaration against his method. And this follows walkouts stemming from the film’s showing at Cannes, where the audience was sharply divided between the film’s technical and intellectual merits and its nihilistic nature.

The great dilemma in all this is that von Trier has made terrific films, perhaps more frequently than many of his contemporaries. “Dancer in the Dark” embodies the best and most stark of his thematic interests, in a film where music and fantasy cloaks the certainty of paralyzing pathos. “Europa” stares into the guilty heart of man, and revels in its cruelty. “Breaking the Waves” deals with conflicts in a marriage that would have made most marriage counsellors recoil in disgust. And “Melancholia,” a film structured like the most downtrodden symphony you will ever hear, understood the stark mood contrasts that come with clinical depression. Where does “The House that Jack Built” fit in with all these? It is not one of his great achievements, if for nothing more than the fact that his tangents are too numerous to give the material a plausible rhythm. We can accept the extremes, verbal or otherwise, if they are presented with a consistent conviction. There is something morbidly alluring about the perspective. But he cuts away too often with explanations that play like intellectual traps stemming too far from the point. Maybe his mind works that way. I dunno. But my philosophy on austere films is concrete: graphic violence or themes owe us a steadier hand than he is willing to provide. That doesn’t negate the fascinating edge of the film, but at a certain point I realized, just as Jack was making his way through a stark epilogue, that we were already in our own hell waiting for him to arrive.

Author’s Note: This review reflects the unrated cut of von Trier’s film, which played for one night across the country and was promptly yanked in favor of an R-rated release, which goes wide starting today.