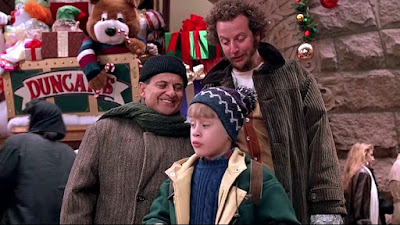 The movie opens a year following the events of the last. The McCallisters – a large Chicago-based family who are usually seen noisily passing each other in hallways – are days away from yet another chaotic Christmas celebration, and are packing up for a getaway to Florida. A similar setup was dealt to them twelve months prior: during urgent preparations for a Christmas vacation to France, they inadvertently left behind young Kevin, who was sleeping in the attic as punishment from the night before. A similar fate seems all but certain this time around as he is accosted by family for an accident occurring at a school choir function and banished upstairs to think about what he’s done. Right. Never mind that it was his brother, the obnoxious Buzz (Devin Ratray), who instigated the prank that would derail said concert. Or that his apology to the family is, at most, a pandering exercise in kissing up. But the circumstances exist as they must, I suppose, to heighten the urgency of what must come next: this time at the airport, where Kevin is separated from his family in the middle of a crowd and winds up on a flight to New York, where he is subject to the prying eyes of the street-smart and the hard-edged. As if being the youngest in a family of aloof morons hasn’t already prepared him for that, of course.

Turns out those in the Big Apple aren’t exactly working with a full deck, either. Consider a trio of employees at the Plaza Hotel, who are one-upped by young Kevin when he manages to talk his way into renting a suite without a parental figure around. A cluster of setups almost directly cloned from the earlier film means that these adults will easily be out-maneuvered by their child host, and they won’t recognize so until much later, when another prank up his sleeve means that the wait staff will be fooled into believing a VHS audio recording is actually a menacing guest with a gun. Are you buying this? How many years did these people have to live before arriving at a point of total intellectual density? The movie makes a case against belief that New York holds any functioning adult to a high standard of common sense.

Never mind. There would be little point in all this, of course, if the same burglars from the first movie didn’t show up for a rematch. Their presence is foreshadowed early on when a newspaper clipping, announcing their escape from prison, flashes on the screen during a wind storm. What sort of luck is it, however, that they stow away on a fish truck that arrives in the exact same city that Kevin is currently stranded in? The same sort of dumb luck that also allows Kevin to find – and successfully convert – a town house in the upper west side into yet another death trap for the burglars, whom he will lure there after catching them on Christmas Eve robbing a nearby toy store. How this all falls into place is too convoluted to explain, but one nagging element bypasses the dismissals: who exactly taught Kevin to be this precise with all his elaborate death traps? Is there an angle we are missing, potentially to be explained by a missing brother who was once involved in military strategy? Maybe his father, played with straightforward ease by John Heard, is harboring some unknown secrets lurking in an unused subplot? Something that would emphasize this unique talent, even beyond the implausible accuracy of the results, would make for something interesting. Seen twice, they are a total retread.

At one point this was all rather amusing, even in hindsight. The first “Home Alone” was by no means a marvel of cinematic mastery, but it accomplished exactly what it intended: satisfying the youthful cravings of kids who enjoyed the idea of one-upping troublesome adults. It was funny and zealous. Being a cynical adult certainly dulled that edge, but somehow it persisted with admiration – like comfort food you enjoyed feasting on, even as you became aware it had no nutritional value. Nostalgia, unfortunately, is not the gift that masks the stupidity of “Home Alone 2.” Age is too powerful, and our minds too sharp to accept what goes on here. The movie is one of the most painful fantasies ever imagined, made more aggravating by how its comic situations dominate the conversation instead of the more absurd realities resting beneath them. Not a single moment within the material is inspired by something other than repetition, and director Chris Columbus appears caught in the all-too-familiar quandary of inferior sequels, which are spurned by a need to repeat history rather than expand on it.

And what of the film’s centerpiece of traps populating the final act? Some of them are so violent that it’s a wonder no stunt men sustained injuries. Among a host of scenarios that include hitting burglars in the face with bricks from four flights above and getting electrocuted in the basement, the film also includes blow-torch explosions, falling through floor boards, bags of concrete crushing someone’s face, and even a tool chest rolling down a stair well, without falling over, so that it can crush the two men standing on the other side of the doorway. Here are burglars that should have been dead (or at least unconscious) before they made it that far. To suggest that, unfortunately, implies a reality that does not exist for anyone involved. So what are we to accept the material as? Light farce? Absurdist parody? Or a live-action cartoon? Bugs Bunny and Daffy Duck certainly got away with more, but with good reason: they were figments of a drawing. Maybe a film about all these sorts of gags would have been more suited for the pen of an animator. Seeing them played out in flesh and blood makes me clench in discomfort.