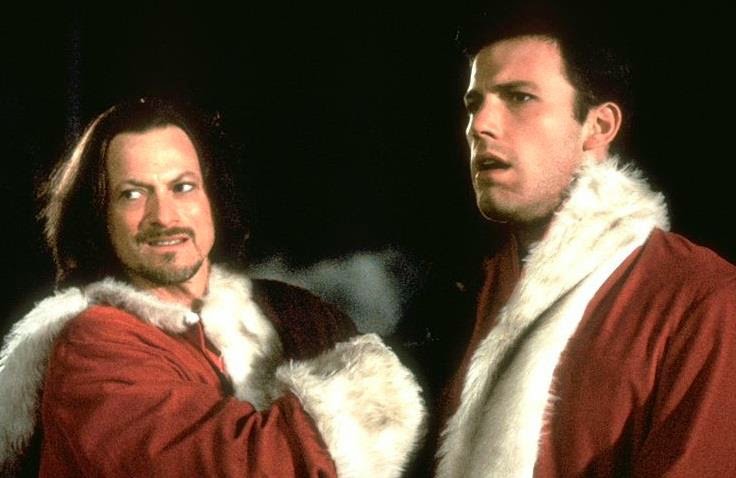 The average human being knows that pathological liars usually deserve whatever they get, and in "Reindeer Games," actor Ben Affleck creates a character that survives on feeding lies to whoever will listen, and then (surprise surprise!) learns the hard way of how they can turn around and bite back. He stars as Rudy, a prison inmate convicted of grand theft auto, spurred by the notion of being freed in two days from the maximum security stronghold. He wants hot chocolate. He wants pecan pie. Most importantly, he wants to meet up with a beautiful woman named Ashley, who has been writing love letters for the past few years while he has been behind bars. Once he gets his wish, however, Ashley's very own brother, a ruthless man named Gabriel (Gary Sinise), blackmails Rudy into heading up a heist on a popular nearby casino on Christmas Eve when security is diverged and the customers sparse. But how do we feel sorry for the ex-con after he is dragged into the criminal act? Heck, Rudy isn't even the man Ashley has been writing the love letters to!

You see, Rudy's cell mate Nick, who had been receiving those love letters for awhile after being convicted of murder, is killed off just days before he is let out of prison. For fear that the attractive redhead (played by Charlize Theron) would feel neglected by his apparent no-show, Rudy assumes the role of his friend Nick, although the only knowledge he knows for sure about his deceased friend is that he once worked at an Indian casino.

They smile at each other, shop for clothes, and even frolic in the nude ("When I get back to the room," says Ashley, "you better be wearing nothing but a candy cane"). Gabriel, though, wants money, and bad; assuming that Rudy is Nick, as Theron's character does, he and his friends confront the convict with a proposition--either he helps in their quest to take down the Indian casino, or dies. Since the mess cannot be undone, Rudy continues to impersonate Nick, if only for the benefit of staying alive. When Gabriel asks Rudy to map out all of the security rooms and passages inside the casino, though, all hell begins to break loose and the plan goes haywire.

The movie is one big disaster, a snowball of deceit, manipulation and dreadful lies that pack together in some of the most gawky ways I have ever seen. Since the characters are so brain-dead and clumsy (Gabriel's gang has not even pulled off a single robbery in their past), the script supplies them with endless dialogue to waste their time while waiting for Rudy to map out a plan in getting away with all the casino's money. The plans are shaky but the characters seem to think that their mission will be successful. But we doubt there is much hope for any of those involved with this wretched crime--the thieves would rather sit and talk about blowing someone away instead of actually getting involved with the heist.

The movie opens in the prison, where Rudy and his then-daydreaming cell mate Nick relish in the thought of being released from prison. After a cafeteria riot involving cockroaches in lime Jello breaks out, a knife is pulled and Nick takes the wound. Rudy assures him that he will recover, but a few short seconds later Nick is dead. Rudy begins reading the letters and admiring the pictures of Ashley. When parole day arrives, he is ready to board a bus and go home, but stops halfway and walks up to Ashley, claiming to be Nick. You know the rest.

Of course Rudy tries to back out of the masquerade once Gabriel has him in a compromising position. To keep alive, he agrees to help the henchmen in their robbery attempt, even though some of the henchmen's requests come with their own conflicts. How does one, for instance, reveal all the hidden security rooms and trap doors of a casino without ever working there? Simple--claim that the casino has remodeled since the employment, and request to be taken there to analyze the new layout. But soon many of the lies arrive with consequences, and by the end Rudy's effort to deceive for survival becomes a farse, as new twists are introduced that immediately defeat the purpose of certain other themes in the picture. Even certain characters lose their titles--one minute someone is the bad guy, another minute he is simply a bystander who hasn't a clue as to what the hell has happened. The movie not only lacks suspense, it lacks negotiability and simple logic.

Still, I find myself giving "Reindeer Games" a whopping one star, probably because it arrives later than a much worse but similar thriller named "Eye Of The Beholder." Does this indicate any merit on its part? Maybe. I tolerated the implication that people who seem sweet and good-natured are not always what they seem on the surface, and found a twinge of hope at the beginning of the movie when Affleck is first demanded to organize a heist on a gambling establishment at gunpoint. But what a mess in the long hall! In a movie that features manipulators descending deeper into problems, the only real surprise is how such a talented cast got attached to this atrocity.