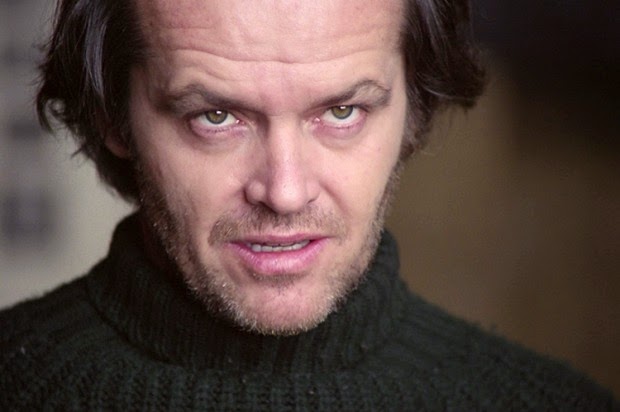 Evil has its way of manifesting in the faces of people whom we are most familiar with, and in Stanley Kubrick’s “The Shining,” one is bound to completely be amazed at how the charming image of Jack Nicholson is suddenly altered into a disturbing, unforgettable presence. The performance itself is the most incomparable of its kind; one that doesn’t require any physical alterations, but a gradual deterioration of sanity. For Nicholson himself, who has seen such transformations throughout his career (the Joker from “Batman” comes to mind), this isn’t simply a straightforward performance, but one that requires him to unleash aggression and hatred as if he were personalizing the fierce screen persona. It may be the finest performance of his career.

But who could forget what else “The Shining” has to offer? The movie is one of the greatest and most hypnotic ever made, a work of sheer genius and from the first frame until the last. It was the only horror movie Kubrick ever made, which may be positive on our part; because he was always motivated by a style that seldom had seen reproduction from other filmmakers, this allows one to look at the product from a neutral perspective, canceling out all standard comparisons to other horror movies, especially those that were also tailored from Stephen King novels (although King himself thinks Kubrick’s adaptation of his novel was butchery). To say that the picture is one of a kind is accurate, but one in a million feels even more appropriate.

Especially amazing, after all this time, is how well Kubrick used his actors and visuals to underscore the themes of the story itself. Pauline Kael set it best when she said “Kubrick isn’t interested in the people on the screen as individuals. They are his archetypes, and he's using them to make a metaphysical statement about the timelessness of evil.” There is a great scene between Nicholson and his costar, Shelly Duvall, that validates this statement; it involves Torrance’s wife, Wendy, snooping through her husband’s work (more on that later) when he catches her. Just as evil can back its victims into a corner before they are willing to fight back, Torrance scares his wife up onto a flight of stairs using his rumbling voice and foreboding remarks (“I won’t hurt you; I’m just going to bash your brains in”) as ammunition—that is, before she finds the strength to fight back. And—how brilliant is this?—she just happens to have a baseball bat on hand to help with the job.

The technical details are prototypes in themselves, helping the story build massive tension; the long hallway shots, the eerie musical score, the use of words written backwards, the implication of a blizzard, and the tall, wide staircases establish a sense of uncertainty for both the audience and the individuals in the movie. Each of the characteristics are also evidence of the haunting craftsmanship—the photography of the hotel, for instance, creates a portrait of fabulous beauty long before the breakdown of the characters’ lucidity chars our attraction to it.

Visuals aside, the progression of the story is the picture’s biggest virtue. Jack Torrance is a caretaker, of sorts, who has just agreed to take his wife and son along with him to watch over, for almost five months, the monstrous Overlook Hotel (the exteriors of the hotel are actually taken from Timberline Lodge on Mt. Hood right here in Oregon). Their family already has a history of being dysfunctional—Jack himself once abused his son, the wife Wendy is a heavy smoker and is always paranoid, and the son Danny is, essentially, psychic. The hotel they are asked to look after is one of the most atmospheric in a movie: it contains long corridors, echoing bathrooms, strange open areas, and pictures from the past hanging on walls, in which the people appear happy but look like they’re hiding secrets. One of the areas of the hotel piques the interest of the little boy—Room 237—but he is told not to go inside. Each time he is near, though, a vision of two little girls appear, accompanied by them “come play with us.” We then see the same hallway (for only a brief second), but the little girls are slaughtered and their blood soaked into the walls. The look on little Danny’s face is enough to upset any viewer here; the actor in place of him seems to really be frightened with the material.

When it comes to embodying characters, however, Nicholson is the real master at work here. We slowly watch the layers of his character peel away to reveal a heart of pure stone and hatred; the love for his family becomes revulsion, as he walks around the empty hallways, sees images of parties, and drinks a few shots of alcohol (even though the film establishes he is a recovering alcoholic). He originally planned to use the time in the hotel to finish writing a novel, insisting that his wife and child do not disturb his concentration. But maybe hallucinations, and a feeling of claustrophobia brought on by a sudden blizzard, are too much for his sanity to handle. When Wendy goes to investigate, her findings are a bit startling—every page of work he has typed for his book repeats the same phrase: “All work and no play makes Jack a dull boy.”

The movie is a thriller, yes, but one that requires psychological thought. There are numerous frontal displays of terror, but many of the visuals are merely Kubrick showing off his visionary talent; the story’s context remains deeply hidden even with the apparent connections between the psychology and the chilly images. But this is another great thing about “The Shining,” despite seeming like a criticism; so few movies leave the doors open and let us interpret things for ourselves in the end. Who were the people Jack was seeing in the hotel? What really happened in Room 237? And was the blizzard merely a coincidence or fate for these people? The great thrillers by Alfred Hitchcock, among others, never offered any simple resolution for the characters or the viewers. Such success may be achieved, I gather, because an indefinite resolution is scarier than one that ties up all the lose ends.

Kubrick’s showcase of abilities, both with the camera and his characters, are incomparably haunting; they authenticate his passion for details and need for perfection. But he died, sadly, in early 1999, ending a magnificent career that stretched over four decades. After his death, the long-awaited “Eyes Wide Shut” finally made its cinematic debut, but was greeted with mixed acclaim, with certain individuals calling it brilliant and others claiming that it was sick and preposterous. Certainly the film’s director would have been familiar with the reception, though; after all, even “The Shining” had its share of criticisms (film historian Leonard Maltin writes “Nicholson goes off the wall so quickly there’s no time to get involved in his plight. Some eerie scenes, to be sure, but the film goes on forever.”) Why is this? Kubrick enjoyed slowing down a film’s progress, probably because it helped tension settle in more proficiently. More so, his material is not simply “adapted” from novels; it is shaped to fit his own vision, no matter how different it may seem from the original source. Purists of fabulous written work tend to dislike recreant adaptations, but since when did being unfaithful in the movies become such a heinous crime? Sometimes a story needs a little revision even after being published.