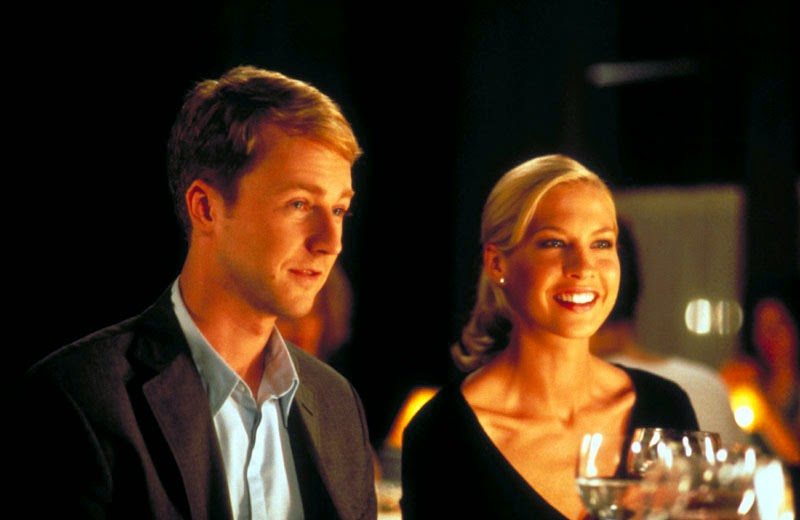 The cast consists of three talented stars: Ben Stiller, Jenna Elfman, and Edward Norton himself. Stiller plays Jacob, a Rabbi who is expected by his mother to marry a Jewish woman to honor tradition. Norton is a Catholic priest named Brian, a good friend of Jake's that, despite belonging to the Catholic congregation, still enjoys talking to his good friend about women and sex. The third party (some might even consider her the third wheel) is Elfman as Anna, a friend of both Brian's and Jake's from the days of Junior High who left their circle and became a business woman in San Fransisco years ago. In the movie, Anna contacts her longtime friends with news that she is returning to New York for a visit, and the two men, hopelessly infatuated with her since they were friends during childhood, scurry to the airport in anticipation of her arrival.

As she emerges from the airport terminal, the old feelings of the two males are lit up like birthday cakes. They do more than admire her; they fantasize about being with her (not an easy task considering their professions, though). And the feelings are mutual, for Anna, enjoying their company throughout the movie, tends to lead them on. The problem is not the fact that a Priest and a Rabbi have fantasies (anyone can fall in love), but the fact that it may shift their contribution to their religious orders. The faith is there, and they use it; only problem is, do they use it to pursue the search for love?

This isn't seriously complex stuff, but writer Stuart Blumberg provides an intricate approach with deep insight at its heels. Movies about religion tend not to go for specifics because filmmakers fear insulting moviegoers, but "Keeping The Faith" manages to be rather gratifying, all while broadening the scopes on two religions at once. The movie doesn't presume that a Jew and a Catholic could not be best friends; after all, when you grow up with someone, should you care that their religious faith is different from yours? It is the hope of these two friends, at least at the start, to form a nightclub that embraces both Jewish and Catholic religions (they also want it to feature karaoke), and both Norton and Stiller are effective in making their personas as charismatic and normal as any person walking down the street in a big city. Stiller shows that any Rabbi can have desires for a different woman even though it might tarnish his reputation with the Jewish congregation, and Norton shows us how even Priests, who take vows of celibacy, can seem like ordinary guys who enjoy looking at women and talking about their secret fantasies. This might dishearten certain individuals, but no one ever said the truth doesn't hurt.

The one nagging problem I have with the picture is its length; why is it necessary to keep a romance comedy going 129 minutes when the plot's substance begins to wear off after only 90? Norton may feel like he has a legitimate excuse (first-time directors usually want to keep things running longer so they can have time to show off their talents a bit more), but he would have better succeeded had his script been written with the makings of a 2+-hour movie. As it stands, "Keeping The Faith" is an hour-and-a-half comedy strung out to implausible length.

Still, there is no denying the real issue here, that Norton's film is one of the first in quite a while that isn't degrading or exploitative to religious orders, but funny all the same. Hollywood has spent too much time in the past provoking laughter using bigotry, cruelty, profanity and Adam Sandler's attitude as a plot's backbone (as if those elements were ever funny to begin with). No, the time calls for better things, and "Keeping The Faith" is definitely a step in the right direction.