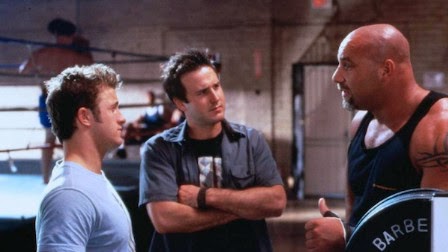 Describing the very essence of wrestling is like trying to write a script for a violent soap opera, composed of thugs on steroids who scream into microphones, make threats to their colleagues who have given themselves "tough" nicknames (like "The Rock"), and then eventually battle it out in the ring using staged physical violence to create the illusion of genuine brutality. It's hard to keep a straight face during any of this nonsense, as the actual fights are choreographed with a sense of cartoonish quality. Why do so many people support its existence? I'm guessing because people admire the execution of their fabricated rampages; it's not that easy, after all, to stage violence when a person's head is supposed to be slammed on a metal bar.

In "Ready To Rumble," we are dispatched into a realm much like that of Beavis and Butthead, in which the two main characters, Gordy (Arquette) and Sean (Caan), work a lowbrow job (cleaning port-a-potties and septic tanks, to be specific), argue constantly using dimwitted dialogue, and find amusement in an even that, although obviously fake, they seem to believe is 100 percent authentic. When the WCW (World Championship Wrestling) comes to their Wyoming town, they go into the Arena to see their hero, Jimmy King (played by Oliver Platt), whip the daylights out of his nemesis, Diamond Dallas Page (played by Page Falkinburg), and remain the undisputed champion. But the head honcho, Titus Sinclair (played by Joe Pantoliano), who is very much in the guise of the WWF's Vince McMahon, sees it as an opportunity to rid his federation of King. Why, you ask? Judging from Platt's physique, and the fact that he is an apparent alcoholic, my guess is that the wrestler's gold days are long gone. The two knuckle heads, pushed by their hopeless faith in the sport, decide to go to Atlanta, track their hero down, and encourage him to reclaim the title that has been robbed of him.

All of this is executed in such a moronic way that the characters could actually pass off as stand-ins for Jim Carrey and Jeff Bridges in a "Dumb And Dumber" sequel. But their incessant stupidity is actually quite amusing in the majority of the scenes, like when Gordy is asked by a beautiful woman played by Rose McGowan to "show me your moves." Characters with the intelligence of fertilizer tend to irritate me, but in a case like this, where the plot knows its personalities are mentally limited, I admired their idiocy.

Unfortunately, the movie makes a few big mistakes, most notably by casting Platt as a wrestler when, in fact, it isn't feasible to consider him genuine wrestler material. His role is considered one of superior strength and agility (at least in the ring), and Platt has little clue as what needs to be accomplished (there isn't much for him to do, either, with the simple dialogue and transparent characterization). Something better could have been achieved had a real wrestler filled his shoes instead.

And the movie, while funny, sometimes requires so little thought that, at certain moments, even people who can relate to Gordy and Sean will not find anything funny about their situations. Some of the material is amusing, yes, but isn't the genuine, complex comedy as seen in something like "High Fidelity" or "There's Something About Mary." Also, what's with the inclusion of Rose McGowan's character Sasha? Aside from serving little importance in the story (except for taking a few moves from Gordy), she is irrelevant to the plot, boring, and seldom observant. Rose McGowan is a competent actress, but she deserves to be in movies that don't flush her down the toilet before a significance is established.

"Ready To Rumble" is hardly depthful, and lord knows that it takes all sorts of unnecessary turns (there is even a moment of melodrama so fake and cheesy that "Patch Adams" comes to mind). But I liked it anyway, simply because it understands the sport is over-the-top and doesn't try to prove otherwise. And that's best, because the movie is genuinely amusing and cheerful, with some delightful segments to back up a positive recommendation (and, for once, the effective scenes actually outweigh the unsuccessful ones). Any picture that could take these events seriously would be just as dumb as the sport itself, but "Ready To Rumble" comes out fighting with plenty of self-awareness.