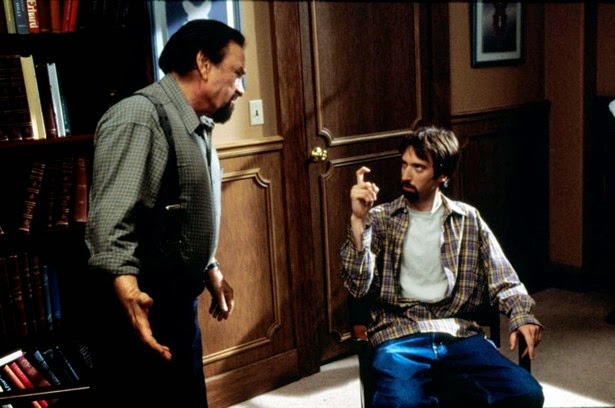 A displeasing sign, of course, but things actually get worse. After enduring Tom Green’s tasteless schtick routine through events like animal masturbation and deer corpse mutilation, the movie actually has the nerve to throw in a morbid child birth, torturous fetishes, and a cruel repeating gag that has an innocent 7-year old boy fall victim to echoing physical jabs (such as a broken beer bottle in the face, a bloody collision with a car door, and a baseball pitch in one of the eyes). Jokes like these live by the ever-so-popular notion that no one can be having a good time unless they are left nauseated or completely shocked, but few of them are ever done in such a repulsive manner, or at such a level of complete and utter mean-spiritedness. “Freddy Got Fingered” actually pushes the envelope as far as it could possibly go, surpassing “There’s Something About Mary”s hair jel joke and “Scary Movie”s use of a human penis as a weapon of fatality as the most sick and vile work of comedy ever put on the theater screen.

But now I’m getting ahead of myself. In case you don’t know by now, “Freddy Got Fingered” is the warped, reprehensible cinematic child of MTV comedian Tom Green, who is famous for essentially being who he is—an obnoxious, moronic and childish creep who provokes the people around him to the point of violent nature. Here, we can understand why his targets like to throw punches; the man isn’t just crazy, he is a nuisance to our own sanity as well. And yet here he is, more popular and praised than ever before, with his own movie now in theaters. The explanation? Perhaps he has realized that a barely-R-rated, offensive and loathsome movie with him as the prime antic was the only thing left not yet accomplished in his infamous career. Now, with THAT under his belt, maybe the comedian will finally settle into some kind of permanent retirement from the entertainment industry.

The story of “Freddy Got Fingered” serves merely as a wire of support for all the shameless, utterly pathetic jokes. In it, Green plays Gord, a 28-year-old cartoonist who still lives at home, doesn’t have a job, is stuck in a phase of adolescence, and pretty much annoys anyone around him. The entire plot direction depends on the same chord of chaos: Gord wants to sell his cartoon, tries hard, falls flat on his face, and takes out his anger on anyone around him. The most common victim of his pranks is his father Jim (Rip Torn), whom insists that “as long as you live in my house, you’ll live by MY rules!” The jokes that dear old dad falls victim to include being moved to Pakistan in his sleep, being sprayed with elephant semen, and being accused of molesting his younger son Freddy (which, not coincidentally, is where the movie gets its title). It’s all completely volatile and twisted, but it’s Tom Green, so what did you expect.

Somehow, through all of this, there’s one thing that manages to be halfway positive about the movie: it never gets boring. Sure, we are keelhauled through ever moronic twist and disgusting intervention, but few (if any) of these things are orthodox, which gives the movie this oddly observant shock value, even for those who would like nothing more than to despise every single aspect of it (which I come very close to doing). To that effect, I’m willing to bite the bullet and at least give the movie a whole star—anything higher, needless to say, would be an act of insanity on my own part.